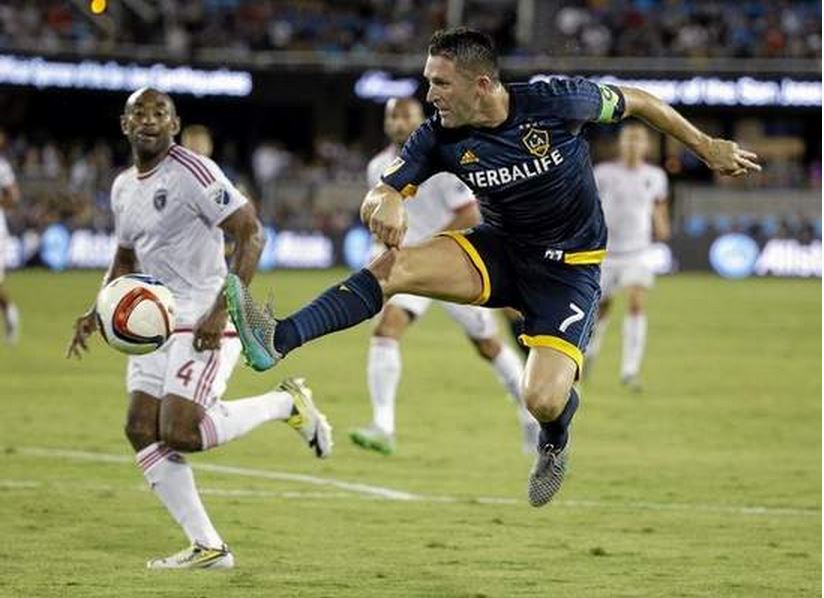 Galaxy forward Robbie Keane, pictured in a match against San Jose in 2015, has scored twice in the first three games of the 2016 season, but only on penalty kicks. (Marcio Jose Sanchez/The Associated Press)

Although the Galaxy outshot San Jose 17-6, including a 7-1 advantage in the first half when the sides where an even 11 vs. 11 on the field, during Saturdays’ 3-1 victory, captain Robbie Keane was not impressed.

“I wouldn’t say it was a great day for us, apart from the win,” Keane told Time Warner Cable after the game.

In a tactical change from previous games, Sebastian Lletget played up top next to Keane with Mike Magee sliding back into the right midfield. The Earthquakes were very compact during the first half before Simon Dawkins got sent off with a red card, limiting the Galaxy’s looks at goal, but there was good passing between Magee, Lletget and Gyasi Zardes.

“Create more chances, keep the ball,” Keane said of what the offense needs to do to improve. “That’s two games that I haven’t touched the ball very often … so changing the system or something because when you play the front on your own, naturally you don’t get many touches as a number nine. But what you should be doing is getting some chances in and I haven’t gotten any chances in the last few games so that’s a bit disappointing. So hopefully that will change in the next few weeks.”

Steven Gerrard injured his left calf in the first 90 seconds of the game, adding him to the Galaxy’s growing injury report. Bruce Arena said he is “concerned” with the early season injuries, but is comfortable turning to his bench, which he focused on strengthening this offseason.

Nigel de Jong looked to hurt his ankle in the final seconds of the game, but said after the game that he just took an awkward step and that he will be fine.

The Galaxy have some time to heal before their next game, a road matchup against Vancouver on April 2.

Quote of the night

“When you see big dudes like that, all tatted up with bald heads, you kind of assume he’s going to be a donkey, but he’s the opposite. He’s clever. He’s got good vision, he can run with the ball and obviously he does the dirty work as well so it works out well for us. … He’s quality all around.”