Jelle Van Damme (right) has been a valuable asset for the L.A. Galaxy on offense and defense, while quickly becoming a locker room favorite. (AP Photo)

As Nigel de Jong answered a question at his postgame media scrum in the Galaxy locker room after the Galaxy’s 3-1 win over the San Jose Earthquakes on Saturday, he paused. He heard a familiar song come over the speakers.

“Is that the Dutch National Anthem?” the Dutch midfielder wondered aloud, peering over the glob of media members for the source of the song.

He didn’t have to look very far. Defender Jelle Van Damme was smiling by his locker right behind the crowd of cameras and microphones.

Galaxy head coach Bruce Arena talks about his team’s performance against San Jose, Jelle Van Damme and the growing list of injuries his team is carrying. 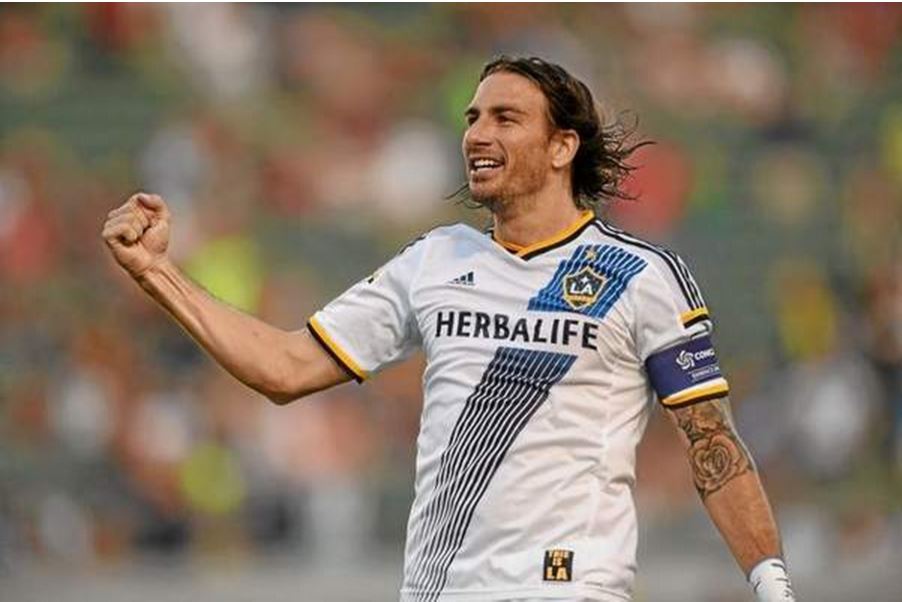 The Galaxy welcome their in-state rival for the first California Clasico of the year Saturday at 7:30 p.m. as they try to shake off a last-second loss to Colorado last weekend. The Earthquakes are one of three MLS teams to start the season with two straight wins, but you can throw out the records for a rivalry as heated as this one.

Take a walk down memory lane with A.J. DeLaGarza, Mike Magee and Alan Gordon as they relive some of their favorite and least favorite California Clasico memories.

Friends, family and fans of A.J., turn away

Gordon hopes you’ve forgiven him for this one

Forward Giovani dos Santos is likely out for Saturday’s game, head coach Bruce Arena said on Thursday. Additionally, Gordon (neck) and left back Ashley Cole (back) are healthy. Goalkeeper Dan Kennedy will be out with a partially torn groin for up to a month. Defender Leonardo is still recovering from knee surgery and will be out a few more weeks. Midfielder Jeff Larentowicz is still working back from offseason hernia surgery, while forward Jose Villarreal is listed on the MLS injury report with a leg injury.

Since San Jose returned to the league in 2008, the overall series is almost even, with the Earthquakes owning a 10-9-7 advantage. 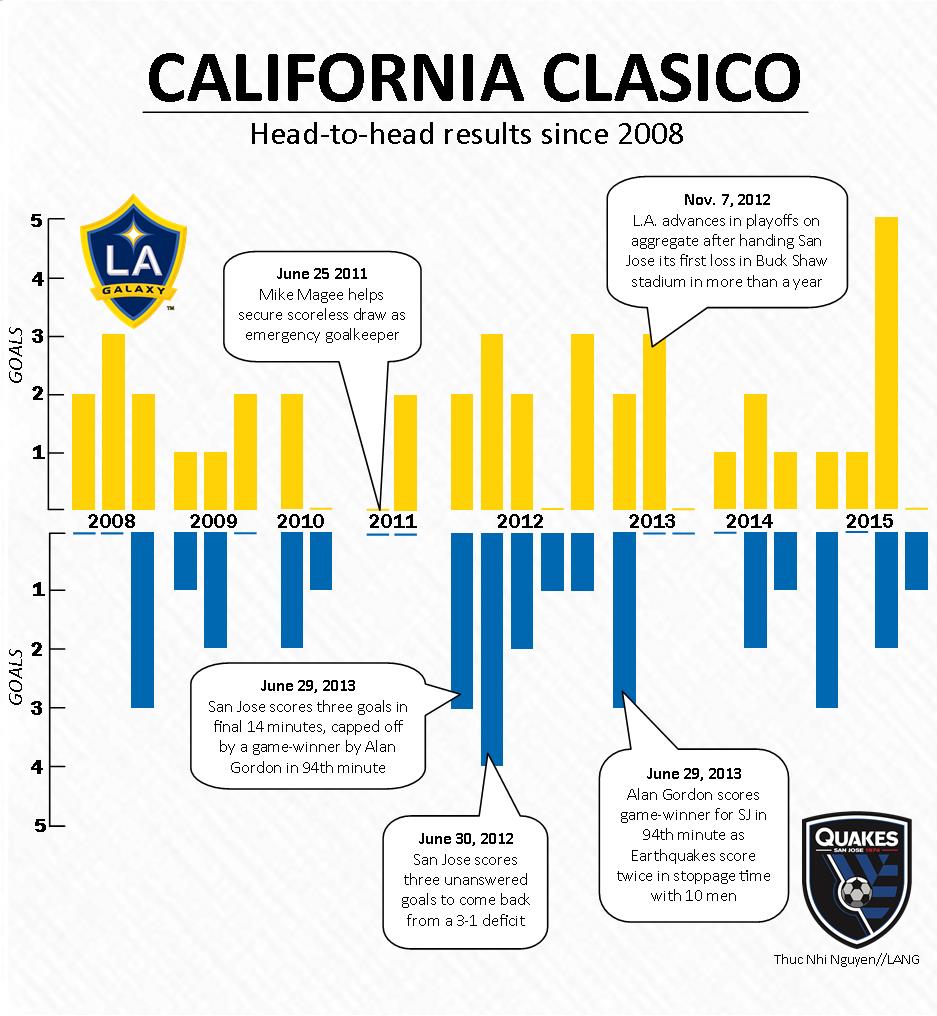 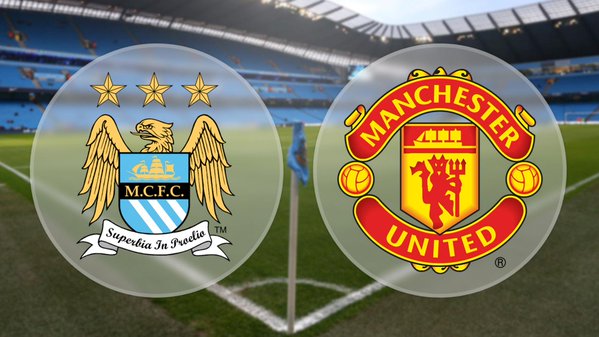 This is how things stand at the top of the #BPL heading into Matchweek 31… pic.twitter.com/SqV5FttJqB

#mufc return to @PremierLeague action with a huge game on Sunday – the derby. Preview: https://t.co/UWAyKGMW5F pic.twitter.com/7FmZtvGlNa 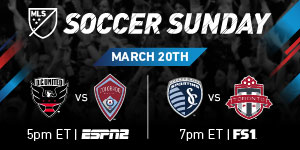 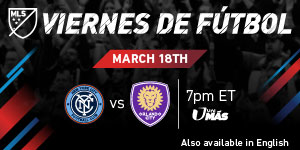 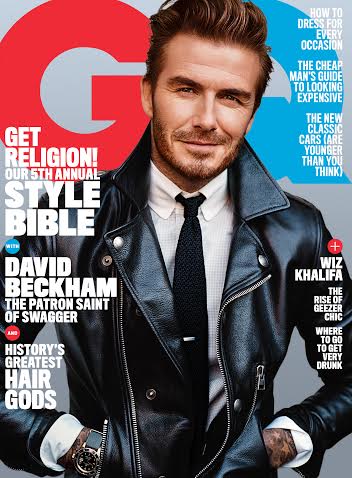 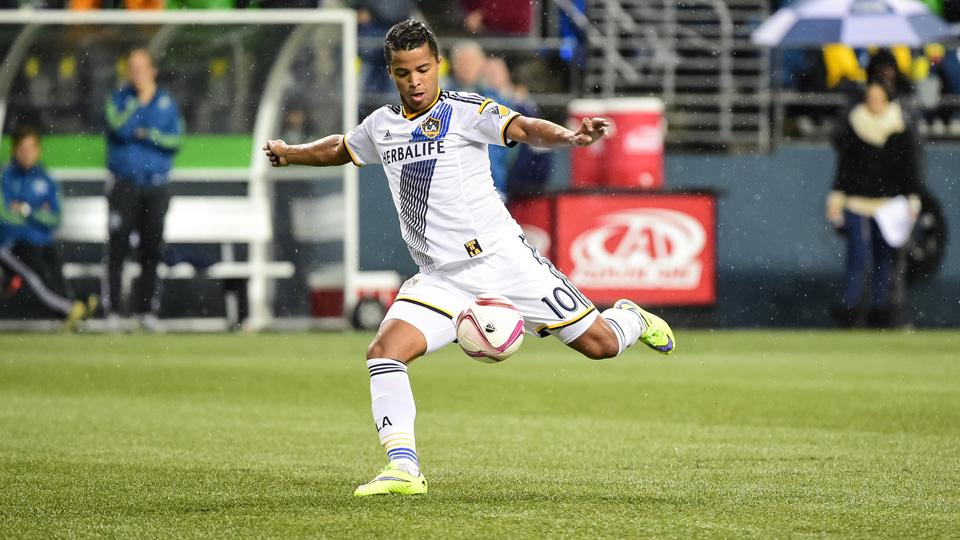 Dos Santos suffered a muscle strain in the season opener against D.C. United, missed the second half of that game and sat out against Colorado on the road last week. The 26-year-old trained on the field on Thursday, but it did not look as if he trained fully.

Arena said Ashley Cole, who was a late scratch from the lineup against Colorado due to slight back tightness, is healthy for Saturday, but added that the 35-year-old left back “looked a little cold” during training.

Forward Alan Gordon had a bulged disc in his neck, but said he is ready for Saturday if he is called upon. Gordon sustained the injury in practice before the Galaxy’s 4-0 loss to Santos Laguna in Mexico and did not dress for either of the team’s MLS games.

“As long as the inflammation is down, I’m good to go,” Gordon said. “There’s no set backs for me and there’s nothing holding me back. I’m good to go. It’ll just be something that’ll be hurting when I’m 50.” 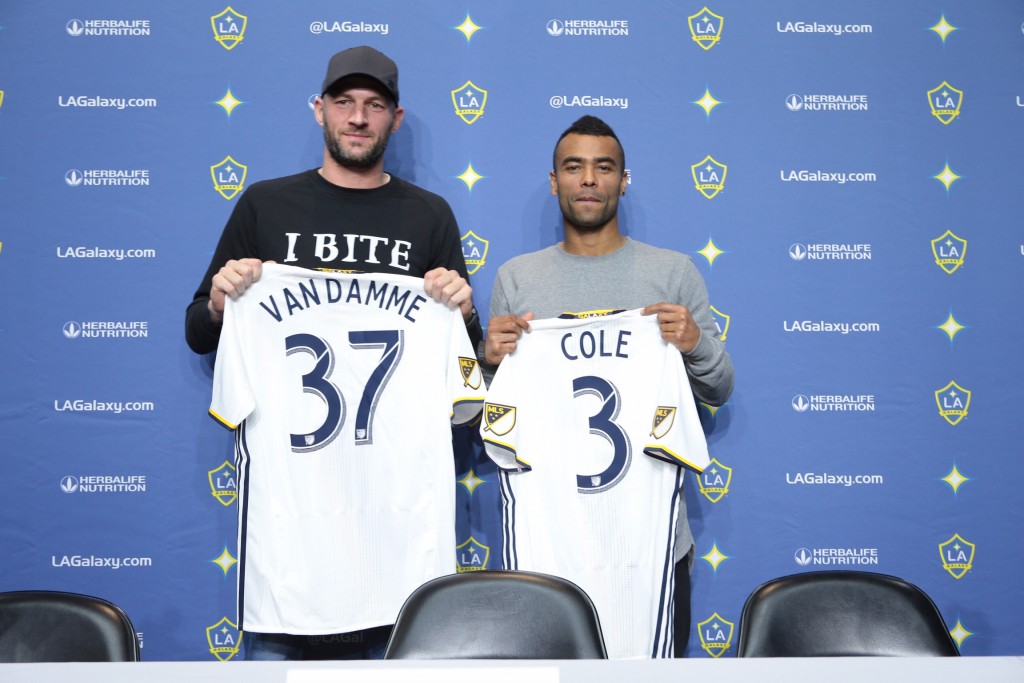 Oldies, but goodies: Galaxy coach Bruce Arena said the signings of veterans like Ashley Cole and Jelle Van Damme should help, not hinder, the development of young American players at the club (Photo courtesy LA Galaxy). 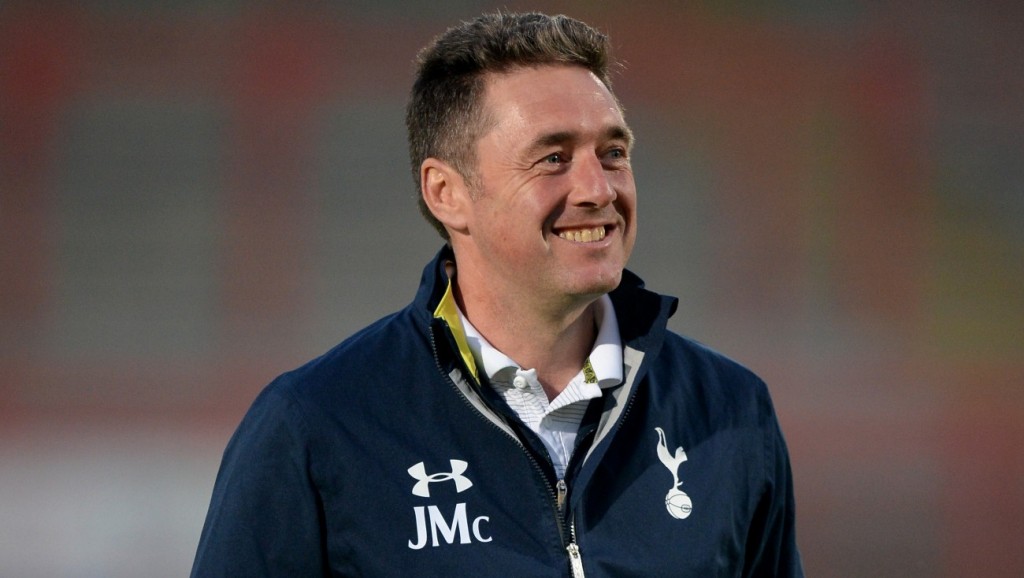 The event is free and open to the public.

Here’s more on McDermott via the Pomona College press release:

McDermott has worked with players of all ages and at all levels since graduating from the University of Liverpool in 1989. He began his career at Leeds United’s Football in 1991 before becoming Watford’s first football and community development officer and, later, its youth development officer and academy manager. As national coach of the Football Association, he worked with young players, from 16 to 21 years old, on international teams. In 2015, the FA presented McDermott with the Outstanding Contribution to Youth Development Award.

Under his leadership, the Tottenham Hotspur F.C. Academy has earned a strong reputation for developing home-grown Premier League professional footballers and equipping many other graduates to play in both the English and European football leagues. The Daily Mirror newspaper said he has “played a massive role in development” and is “hugely respected with in the game,” while The Guardian observed he has “built his reputation as a shrewd judge” of upcoming players. 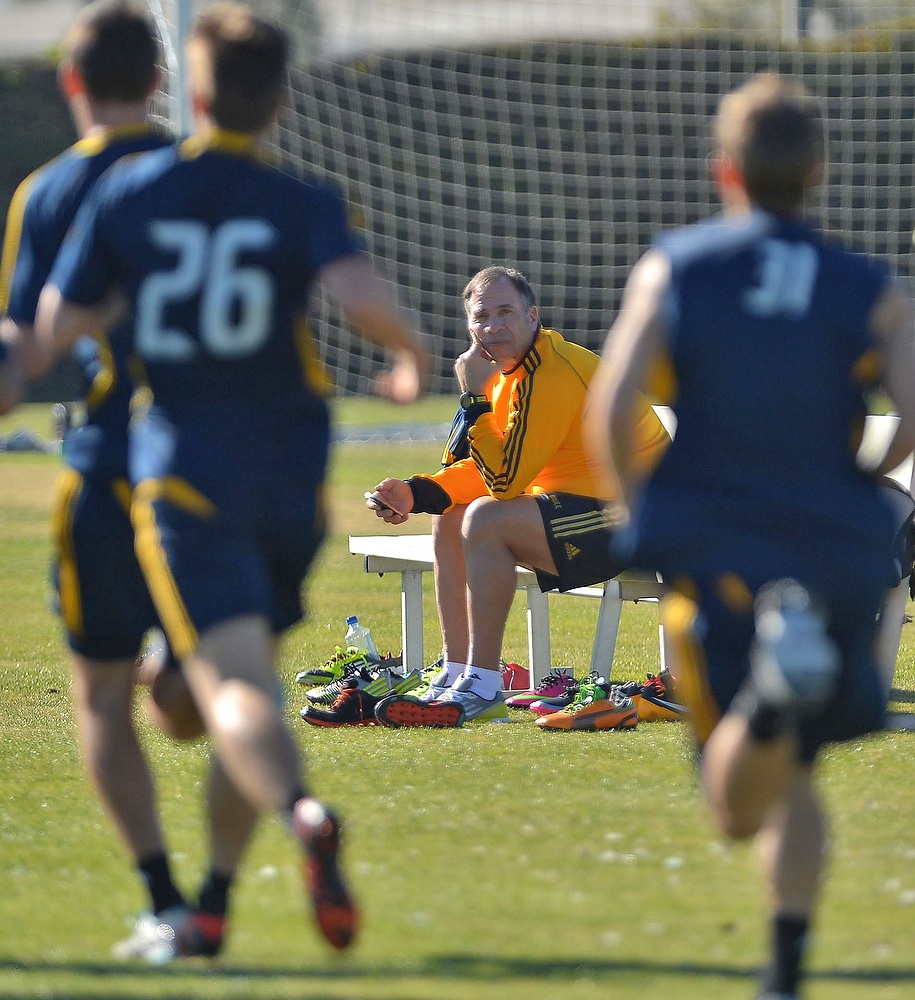 Galaxy coach Bruce Arena Tuesday criticized a lack of a “policy” for adding stoppage time to MLS games in the wake of last weekend’s 1-0 loss to Colorado that saw the Rapids’ winner come deep into the five added minutes at the end of the second half.

“The game going five extra minutes was a glaring mistake by the referee and assistant referee,” he said Tuesday after Galaxy practice. “They don’t have a (stoppage time) policy, so there’s no consistency with that. What’s going to be required is they establish a policy so everyone is aware of what it is.

“I thought it was going to be two extra minutes, possibly three, then it got to five — it was way off,” he added. “Minutes at the end of the game can not be a freelance thing. There has to be an established criteria how you do that.”

Arena criticized the fourth official in particular for not paying enough attention to the game and being more concerned with players standing in the technical area than watching the clock.

But, he conceded, the Galaxy had to take a measure of blame for the road loss at altitude that came in just the second game of the season when conditioning remains an issue.