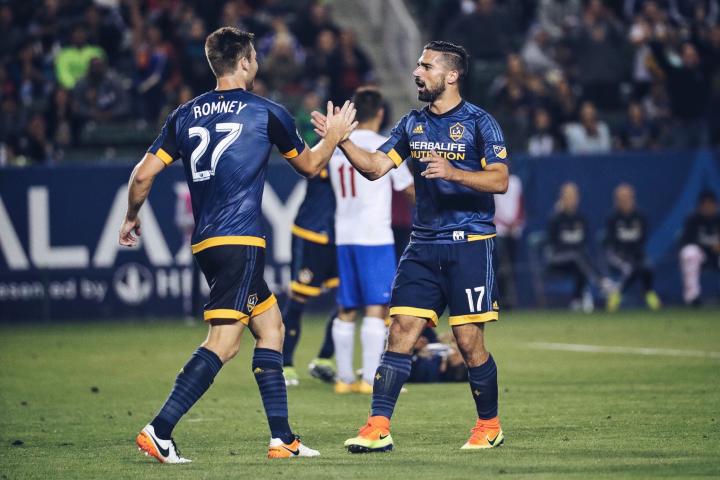 The L.A. Galaxy used a controversial goal to break a 1-1 tie against amateur side La Maquina during overtime of Tuesday’s U.S. Open Cup game at StubHub Center as Baggio Husidic sent a quick free kick over to Dave Romney while players from both teams were standing idly by after a foul. Romney scored on an open net while his teammate Jose Villarreal was lying on the ground.

Deadspin called it a “cheap, fake goal.” Husidic, Romney and Sebastian Lletget agreed that there was some controversy to the goal, but said it was just a heads-up, legal play.

Husidic said he confirmed with the referee that there would be no whistle, then passed it out to Romney, who hesitated before he finished the shot. It was the defender’s first goal of the season with the first team, but Romney admitted he would have liked it to come under better circumstances.

Said Lletget, who added two goals: “I was just happy we were kind of out of the slump we were in. I was just like, we’ll take anything that we can get right now.”

The play surely didn’t go over all that well on social media.

The @LAGalaxy should be ashamed of what they pulled in the @usopencup tonight. Feel bad that La Maquina didn’t get a fair shot at it.

Playing down a man for 103 total minutes, the Galaxy struggled to find their finishing touch against the Santa Ana-based amateur team. As the game dragged on, La Maquina players started to cramp. Even without the controversial goal, the Galaxy, who added scored two more times in the eventual 4-1 victory, likely would have won the game.

“Clearly we were going to get a goal at some point to win this game,” head coach Bruce Arena said. “But we sure took our time.”

The Galaxy “shot ourselves in the foot a couple times,” Arena said, picking up a red card in the 17th minute then giving up a goal 11 minutes later on a defensive mistake from A.J. DeLaGarza.

The game should have been a walk in the park for the Galaxy, but a proud La Maquina team earned praise from L.A. after the wild match.

“I give them a lot of credit,” Lletget said. “Even if they weren’t the best technically sometimes, their effort was outstanding.”