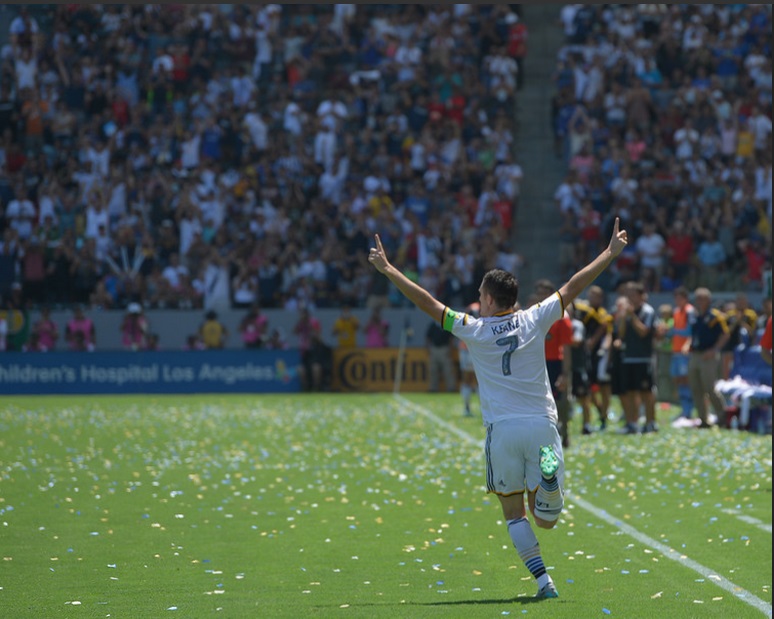 Robbie Keane (pictured in a match against NYCFC) scored to help the Galaxy beat Vancouver. Photo by Steve McCrank/Staff photographer

A three-game scoreless streak for Galaxy players at home is nothing Robbie Keane can’t fix. The Irish striker returned from a month of international duty and scored in the Galaxy’s 2-0 win over Vancouver on Monday at StubHub Center.

Keane has been hampered by injuries and missed five more games while with the Irish national team, but has scored in five goals in six MLS appearances. He’s one of the league’s leaders in goals per 90 minutes played, averaging 0.71 goals per 90 minutes.

His score against Vancouver was a beauty as he curled a long-distance shot into the top corner.

“Robbie’s been putting them in top corners for 20 odd years,” Vancouver head coach Carl Robinson said. “I’m sick of seeing it to be fair. He tried to smile at me and I didn’t want to give him a smile back, but he’s a top, top player.”

Steven Gerrard notched two assists in the game, serving the ball in for Keane and sending a corner kick in for Jeff Larentowicz, who headed home his first goal of the season in the 47th minute.

Larentowicz admitted that he got away with a push, but was happy to record his first goal in a Galaxy uniform.

“It’s good (to contribute),” Larentowicz said. “That’s the goal, to be in the lineup and to be with the team, to help us win games. All those things came together tonight.”