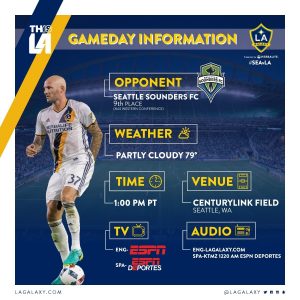 The Galaxy, winners of four consecutive games, are back on the road today in Seattle (1 p.m.; ESPN).

It has been an emotional week for the Sounders with the front office relieving Sigi Schmid of his coaching duties and also the club signing Nicolas Lodeiro to a Designated Player contract.