It was one of those games where the Galaxy should have lost, but thanks to the magic from Landon Donovan, the Galaxy escaped with one point a 2-2 draw against Sporting Kansas City, Sunday.

Donovan entered the game in the 74th minute with the Galaxy trailing 2-1. Two minutes later, Donovan took the feed from Robbie Rogers and slotted the ball by Sporting Kansas City goalkeeper Tim Mejia.

The Galaxy took an early 1-0 lead on an Alan Gordon in the seventh minute. That was the only life the Galaxy showed in the first half.

SKC tied the game in the 50th minute on a goal from Jacob Peterson and then took a 2-1 lead on Dominic Dwyer’s goal in the 69th minute, setting the stage for Donovan’s heroics.

Saturday night was a good one for the Galaxy and the club didn’t even play. 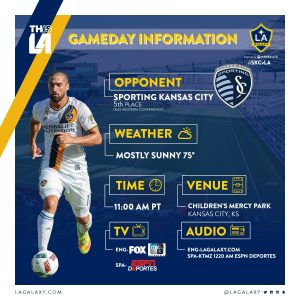 First-place FC Dallas played to a draw as did Colorado and Real Salt Lake suffered a 1-0 defeat to Houston.

With a victory today against Sporting Kansas City, the Galaxy can move to within two points of first place FC Dallas, which is huge considering they will meet twice next month.

Sporting Kansas City begins the day in the sixth and final playoff spot in the West with 39 points, four ahead of Seattle.

The U.S. men’s national team has moved into the top 25 in the latest FIFA rankings, moving up four spots.

Mexico dropped one spot to 15th and Costa Rica moved up three places to 18th. El 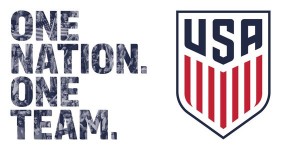 Argentina and Belgium maintain their rankings as the top two nations, respectively. Germany is third. Colombia and Brazil are tied for fourth. Brazil made the biggest jump, moving up five spots.

Carlos Ruiz, who played with the Galaxy from 2002-2004 and in 2008, is back in Major League Soccer, signing with FC Dallas. The move was announced Thursday ahead of the MLS Roster Freeze deadline.

Ruiz recently ended his international career with Guatemala by scoring five goals in a victory against St. Vincent and the Grenadines.

The Galaxy has two meetings with FC Dallas next month.

Ruiz led the Galaxy to the 2002 MLS Cup, scoring 24 goals and eight more in the playoffs 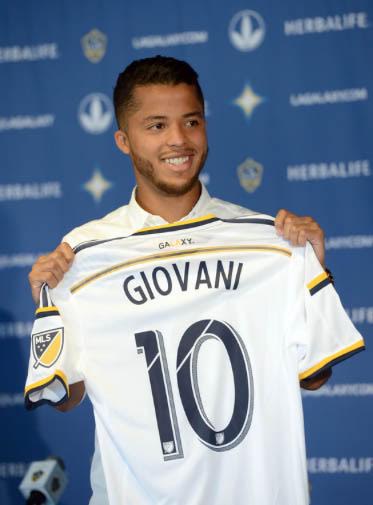 Mexican star Giovani dos Santos was unveiled as the successor to Landon Donovan in August 2015, when he showed off a jersey with the same number the Redlands native made his own (Photo by Staff Photographer Steve McCrank.)

There were a lot more Landon Donovan No. 10 shirts than ones reading dos Santos on the back Sunday on display at StubHub Center as Donovan returned to MLS after an almost two-year absence.

Is dos Santos worthy of wearing that No. 10 jersey?

On a team full of stars, players like Rafael Garcia are important to the potential success, either on the training field or in game action.

What he lacks in star power, Garcia, who attended CS Northridge, makes up for with sheer determination that helped him crack the starting lineup for the first time this year in Sunday’s 4-2 victory over Orlando City SC.

Garcia had played sparingly this season, getting three minutes in the 3-3 draw against Real Salt Lake (Sept. 7), 10 minutes against Columbus (Sept. 3). His first appearance this season came all the way back on Apr. 10.

That would have been enough to frustrate the 27-year-old from Canoga Park.

“Mostly patience,” he said Sunday as one of the keys to earning the starting nod. “It has been a long year, filled with ups and downs, but at the end of the day, I think my hard work and being patient, paid off in the end. It is one match, but it is the first start of the year for me and I was happy to be on the field and help my teammates.

You have some good days, you have some bad days, but at the end of the day, hard work and perseverance pays off.”

Garcia started in midfield and found himself around Brazilian superstar Kaka for the majority of the game.

“He was a hand full,” Garcia said. “My job was to kind of frustrate him by being all over him and kind of did that.”

Garcia went the full 90 minutes and along, with Raul Mendiola, drew high praise from coach Bruce Arena. Mendiola has started two of the last three games for the Galaxy.

“They work real hard in training and they have a great work ethic,” Arena said. “They understand what they can bring to the team and they forced themselves on you. These are the guys, when you pick sides, you don’t mind picking them because they compete so well and they know how to play through mistakes and they give great effort.”

Since Garcia has been with the Galaxy he’s been fortunate to watch and learn from some world class players and he’s relishing every day he’s around them.

“They’re world class players,” Garcia said. “They played in World Cups and they’ve played in big games. More than anything, what rubs off on me is their confidence. How they deal with games and move forward.

Giovani dos Santos said Sunday that he believes that he’s in the “best moment of my career.”

And after the last two games, he would certainly know. 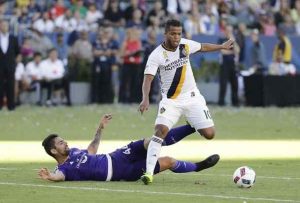 Dos Santos had two goals and an assist in a 3-3 draw against Chicago Wednesday and two goals and two assists in Sunday’s 4-2 victory over Orlando City SC.

So far this season, dos Santos has scored 14 goals and added 11 assists.

Can't counter attack much better than that. Dos Santos levels the match. 1-1. pic.twitter.com/QwTN6clZdn

It was nice and quiet around the Galaxy this week. Nothing big happened, except for the 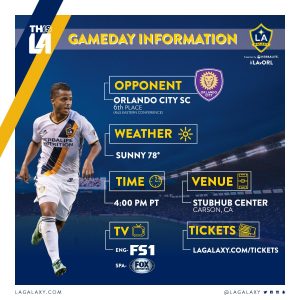 return of Landon Donovan. Donovan ended his retirement and rejoined the club for the remainder of the season.

This is essentially the stretch drive of the season. The Galaxy has six games remaining, including today. With a victory, the Galaxy can vault into second place in the Western Conference and would be just four points behind FC Dallas.

Robbie Keane should be back today. Landon Donovan could be available. Oh and Orlando City SC has the firepower that could give the Galaxy defense some problems.

This should be fun.

Landon Donovan professes love for Galaxy for his return 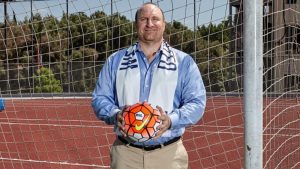