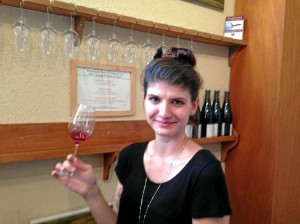 Story and photos by Larry Wilson

A real treat was our three-day stay in Beaune, the heart of Burgundy’s wine country, where the greatest wines in the world are made, and where millions of bottles are stored in vast caverns extending beneath the city.

If the famous hotel Le Cep within the ancient walls of the central city is a little dowdy, at least in its rooms as opposed to its common areas, where all kinds of oenophiles roam and drink, the staff is enormously accommodating.

We had good food and fabulous wines every night. I had a satori experience for a fan of French white wines by hiking up above the village of Puligny-Montrachet and meditating on the biodynamically grown 11 rows of vines farmed by Anne-Claude Leflaive.

An American wine consultant was lecturing two British retailers about her genius, and I listened in; the tasting part wasn’t going to happen, at up to $599 a bottle.

In any case, the French have some kind of constitutional aversion to the Napa experience of tasting rooms in general. We did drop in by chance to the estate of the Count Philippe Senard in Aloxe-Corton; a nice young woman with a tattoo on her inner bicep who kept the wine bar open late for us and poured us several glasses.