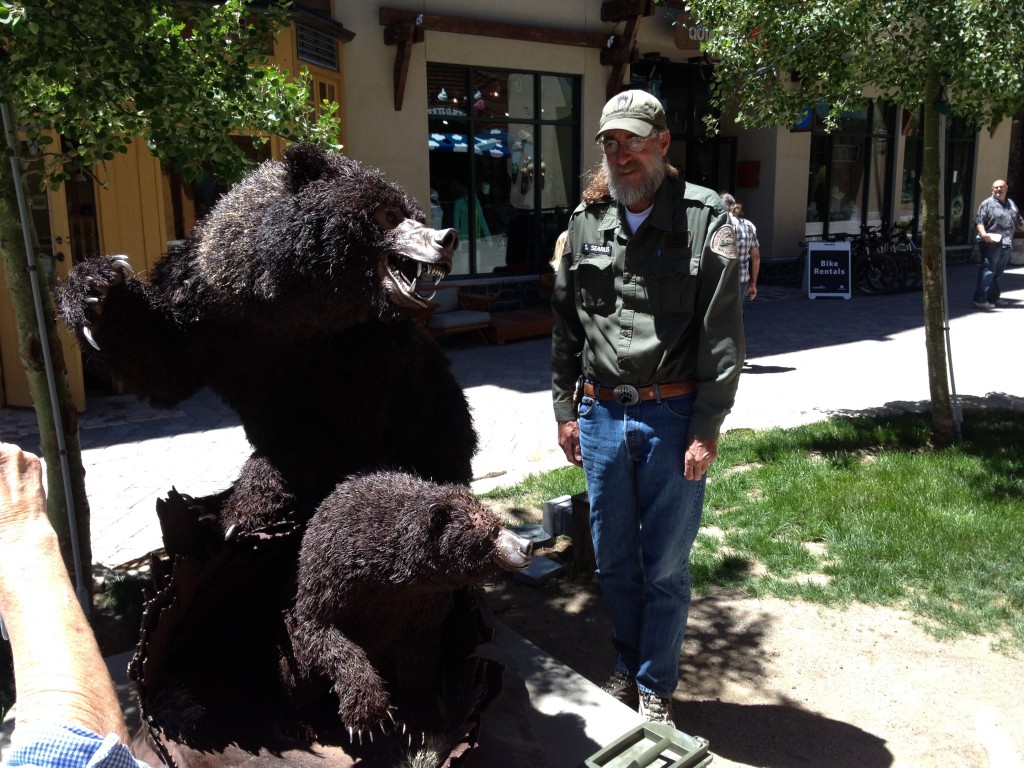 Steve Searles could barely contain his enthusiasm. Mammoth’s wildlife manager was talking about one of his favorite subjects — bears.

The tall, lanky warden had been hired to deal with the ursine problem, which frankly had become unbearable. Rampaging bears were gorging on dumpsters full of trash and running amok at the local Bank of America as well as the school.

“They told me to shoot eight bears to see if that solved the problem,” Searles recalled. “Then I was asked to shoot another eight if it helped.”

So the independent mountain man began to study his prey. When he discovered how smart the black bear is, Searles decided to try another way to deal with the dilemma.

“Black bears are the smartest animals. They’re smarter than pigs, dolphins and dogs,” Searles explained. “So I decided to teach the bears some manners.”

Instead of shooting the beleaguered bears with bullets, the amicable ranger decided to use bean bags, rubber bullets and other nonlethal rounds. Sure they would sting our four footed friends, but they wouldn’t “put them on the ground.”

Call it tough love, but Searles obviously loves his furry charges. In fact, he thinks mankind causes it’s own problems.

“We had stupid people feeding them sandwiches and not storing their garbage properly,” he remembered.

So Mammoth spent $1 million on bear-proof dumpsters. And Searles patrolled the mean streets, handing out instant justice like it was the Wild West.

Pretty soon, the black bears got the message. There was a new sheriff in town and he was a straight shooter. Bears crossing the line got a barrel of beanbags.

Soon, the chastised ursines were heading for the hills at the sound of his voice. And residents stopped rewarding the bears’ bad behavior.

In fact, everyone became so comfortable with the well-mannered bears, they no longer even notice them.

“If kids see a bear near their bus stops, it’s no big deal. They know the bears won’t hurt them,” Searles said.

And the bad news bears no longer hang out around the Bank of America or the local school. But Searles said the bears stroll through the upscale Mammoth Village every night.

“They know they can’t walk down the sidewalk during the day, but late at night they have the run of the place,” Searles said.

Still, tourists are terrified whenever they come across bears in Mammoth.

“They don’t know that black bears are 90 percent herbivores. They live on grass, roots and tubers,” Searles said.

He recalled one terrified couple from Long Beach, who had gone out to a local lake for some great fishing.

“The wife laid out a lavish picnic while her husband fished down the lakeshore,” Searles remembered. “When a black bear came walking down the beach, she keeled over because she thought she should play dead.”

The concerned bear stopped in its tracks, then began eating the lovely meal the considerate woman had laid out. When her husband saw what was happening he snuck into the woods.

When Searles arrived, he yelled at the bear, which promptly scampered off into the brush. The furious woman began berating her husband for not rushing to her defence.

“You don’t have to stare a black bear down or play dead. Just tell him to get out of there,” Searles said.

The unusual idea worked almost over night. The bears learned what they could get away with and how bad manners were punished.

The well-trained bears kept other wild bears from entering the city limits. Soon peace reined again, and the iconic animals found a home in Mammoth.

“Other cities will send helicopters and SWAT teams whenever a bear is spotted in Los Angeles,” Searles noted. “The animals are just coming down from the mountains to look for food in this severe drought.”

Instead, police should use just the bare necessities to teach the bears some manners. Just like Searles did in Mammoth.