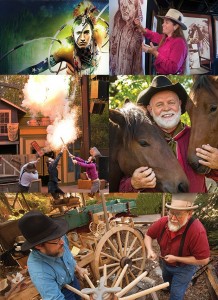 The adventure-loving culture of the Great American Cowboy and the best elements of the classic West flavor the fall harvest features as Silver Dollar City presents a new high-action Wild West Show, the return of a stunt-packed Western stunt show, top craftsmen from around the country and live bands, all part of the National Harvest & Cowboy Festival.

A major focus during the National Harvest Festival is craftsmanship, as the park features 125 top craftsmen from around the country, including Best of Missouri Hands juried artists and a showcase of Western artists, all joining the 100 demonstrating craftsmen of Silver Dollar City.

Guests can experience the thrills of the Old West with a ride on the park’s Western-themed world-famous wood coaster Outlaw Run, named Best New Ride of 2013 worldwide in an industry poll conducted by Amusement Today magazine, winner of the Travel Channel’s Insane Coaster Wars: World Domination in Episode 2, and recently named one of the 12 biggest game-changers in the history of theme park attractions by CNN.com.