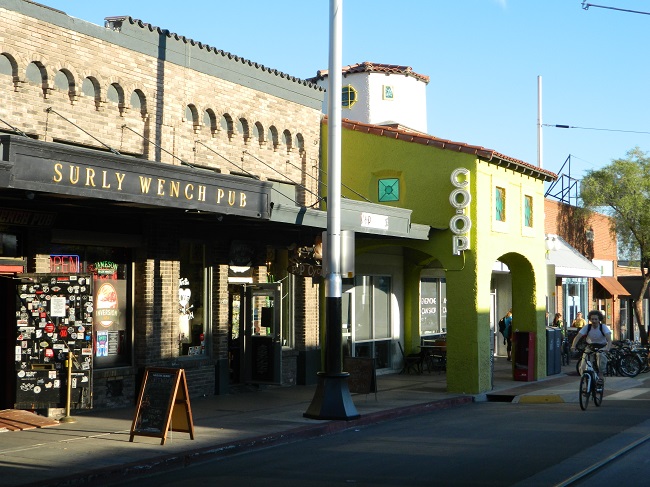 The civic and commercial heart of Tucson is also its soul, with SunLink running right in the middle of the action. Tucson grew upward and outward from this compact district east of the Santa Cruz river, and it was establishing its stature as a place of consequence for a couple of centuries. Culture, commerce and conflict shaped the city, its people and its urban form.

Native American nations tamed the unforgiving desert climate and thrived on agriculture and artisanship in the pre-modern era. Tucson still has one of the largest urban Native American populations in the U.S., with the Tohono O’odham and Pascua Yaqui having deep roots in southern Arizona.

Tucson’s urbanization began in earnest before the Declaration of Independence, with the Spanish establishing a presidio in 1775. Spain, and then Mexico after its independence, influenced southern Arizona even after the Gadsden Purchase in 1853, making Arizona a U.S. territory.

The territorial period put Tucson in the path of the frontier tidal wave and its place in the myth and reality of the Old West. Tucson found its solid economic footing by the time Arizona achieved statehood a century ago, with the biggest boom yet to come in the mid-20th century with the Interstate Highway System and air conditioning creating growth previously unimaginable.

They are all visible in a downtown that’s, surprisingly, an urbanist’s dream come true. Tucson, like most Sun Belt cities, absorbed a large population of aspiring suburbanites who wanted their place in the sun. Tucson, unlike most Sun Belt cities, managed to preserve its downtown from the depredations of post-World War II life: wide roads, constant air conditioning, strip malls and chain stores.

Tucson saved many of its old buildings from being clear-cut for garages, or worse, surface parking lots. Businesses did not turn their store entrances away from the street. Also, much of urban Tucson was platted out on an orthogonal grid of long blocks and wide boulevards.

Downtown maintained its teardrop-shaped boundary and its disharmonious clash of narrow, short-block streets. These are not conducive to fast, efficient movement for motorists — but do create a safe, fun environment for pedestrians — and now, SunLink riders.

Tucson’s civic leaders and downtown business community pursued a concerted historic preservation policy, all of which bear fruit in an attractive, fun and enjoyable atmosphere for workers, visitors, shoppers and anyone in between. This is how the heart of a city should be, complete with a healthy beat.