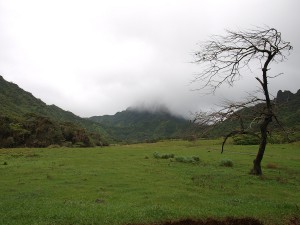 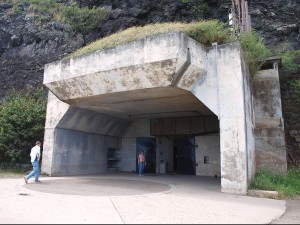 Away from Waikiki, there are more Five-0-related places to visit.

In downtown Honolulu, you can visit the Ali’iolani Hale, which is the building that stands in for Five-0 headquarters on the show. 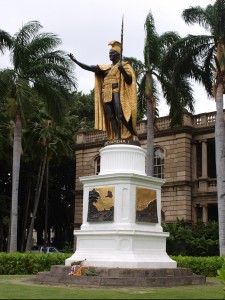 Photo by Karen Weber
Statue of King Kamehameha in front of “Five-0 Headquarters.”

The famous statue of King Kamehameha stands in front of this court building at King and Punchbowl streets. You can go in the Ali’iolani Hale, but you’ll have to go through a metal detector because the building houses the Supreme Court of Hawaii, the court administration offices, a law library and the Judiciary History Center.

The Iolani Palace is across King Street, which was the headquarters in the original “Hawaii Five-0” series. It was a government building then. Now it’s a stunningly restored museum with the most gorgeous koa wood staircase, one of the first telephones on the islands and the quilt that Queen Liliuokalani embroidered while she was under house arrest by the people who overthrew the Hawaiian monarchy. Beautiful building, sad story.

And if you want to see the Hawaii State Capitol, that’s one more block over, behind the palace grounds, facing Beretania Street. 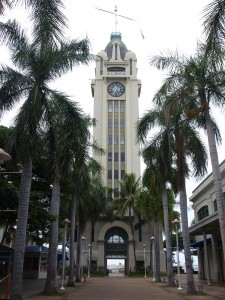 Make sure to visit the iconic Aloha Tower, a city landmark at the Honolulu waterfront, and the site of the International Market Place in Waikiki. Alas, Steve McGarrett (Alex O’Loughlin) will no longer race between the banyan tree trunks, knocking over carts in pursuit of bad guys. The longtime tourist attraction closed for redevelopment on New Year’s Eve.

On a trip to Pearl Harbor, visit the USS Missouri, the battleship where the Japanese surrendered during World War II and where an entire Five-0 episode was set. The USS Arizona Memorial also was featured on an episode this season. I found it fascinating and moving to see representations of the start of World War II (for the U.S.) and the finish, virtually side by side in Pearl Harbor. 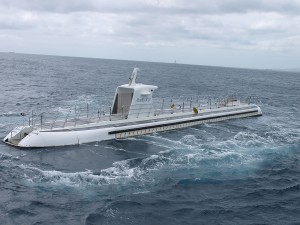 See Waikiki Beach during the boat ride out and tropical fish and sea turtles beneath the waves. Hope you don’t find a body like they did in season 1 of Five-0.

On my vacation on Oahu, I tracked the footsteps of Hawaii Five-0, looking for locations where the show has been filmed. I didn’t have to go far from the Hilton Hawaiian Village to find them.

Out at the beach is a dock where you can catch a boat out to the Atlantis submarines (which appeared in a first-season episode of “Five-0”). The ride out is just as good as the sub ride, giving you a lovely view of Waikiki all the way to Diamond Head. Then you take a dive in a real submarine to see colorful fish and sea turtles gathered around a couple of artificial reefs.

The Spirit of Aloha catamaran also sails from the dock, offering snorkeling and scuba cruises as well as evening trips with a dinner buffet and a view of the Hilton’s Tuesday and Friday night fireworks.

Up on the roof of the Pacific Conference Center is the Waikiki Starlight Luau with a dinner buffet and terrific Polynesian music and dance.

That’s just the tip of the shaved ice at the Hilton Hawaiian Village. There’s so much to see and do there, you hardly need to go anywhere else. And yet, it was just the beginning of my Five-0 adventure. 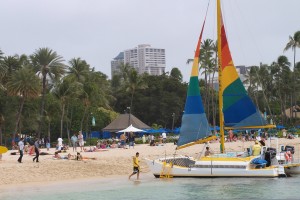 View from the boat to the submarine shows a Five-0 set from season 2. Can you see Danny and Chin walking down to the beach at the far left? 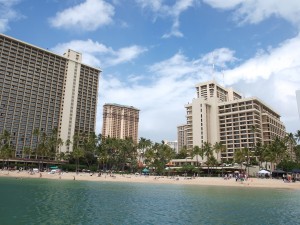 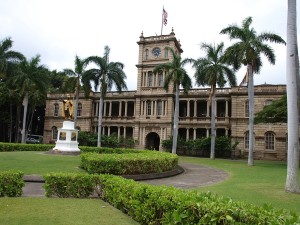