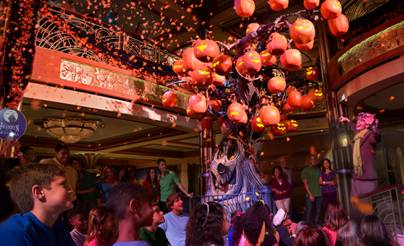 Disney Cruise Line will treat guests sailing this fall to a wickedly good time as the Disney ships transform into a ghoulish wonderland filled with frightfully fun events and activities, special decorations, unique menu items in the restaurants and themed parties on deck.

In 2014, Halloween on the High Seas takes place on most voyages aboard all Disney Cruise Line ships from September through October. This extra-spooky celebration features Halloween-themed parties, lively entertainment and elaborate décor, including The Pumpkin Tree, which magically transforms throughout the cruise. Other special experiences include:

In the fall of 2015, Disney Cruise Line is returning to popular destinations and home ports for limited-time engagements. Two Hawaii cruises, a return to the West Coast with departures from San Diego and a Galveston, Texas homecoming make up a season of special sailings.

Bookings open to the public on May 21, 2014. More details on 2015 itineraries can be found on the Itineraries and Ports for 2015 section of disneycruise.com.

Disney Cruise Line will explore the Hawaiian Islands with two special 10-night cruises in September. The Disney Wonder will sail through the breathtaking beauty of the Hawaiian Islands, where guests can experience the famous beaches of Waikiki on Oahu, see the views from high atop the summit of Haleakala Crater on Maui, take in the lush tropical gardens and waterfalls of Kauai and, on Hawaii Island — the Big Island, explore the natural wonders of the world’s most active volcano.

10-night Hawaii with two days in Honolulu – Vancouver to Honolulu

10-night Hawaii with two days in Kahului – Honolulu to Vancouver

Rates start at $1,650 per person for 10-night Hawaii cruises for a standard inside stateroom, based on double occupancy.

Disney Cruise Line will return to the West Coast for a limited time, offering six cruises from San Diego aboard the Disney Wonder. The five-night Baja sailings depart Oct. 4, 11 and 18, stopping at Cabo San Lucas and Ensenada, Mexico. A three-night cruise on Oct. 1 stops at Ensenada. Two-night Weekend Getaway voyages depart Oct. 9 and 16, giving guests the perfect weekend retreat aboard their Disney ship.