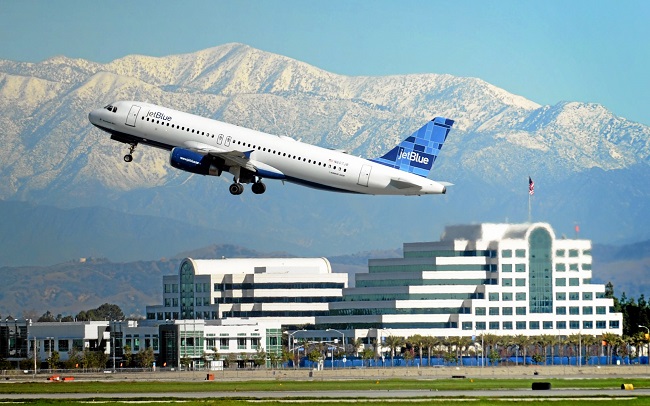 With the rains behind us, for now, a JetBlue takes off from Long Beach Airport with blue skies, snow caped mountains and the Boeing Co. office buildings behind it on a sunny morning.

JetBlue on Monday formally requested Long Beach Airport apply for a federal customs facility, a move that would allow international travel at the city-owned airport.

“JetBlue will utilize only its current allotment of assigned Air Carrier slots and existing aircraft parking positions to fly internationally in addition to our current 11 domestic markets,” Land wrote.

“We look forward to working closely with the city to immediately proceed with the application process and begin the work required to secure an international flight designation for the city of Long Beach,” Land said.

A JetBlue representative said the company has nothing more to add at this time beyond the contents of the letter.

City officials noted the ordinance has never been changed due to “lurking fear” the city could lose its grandfathered exemptions under the Federal Aircraft Compatibility Ordinance of 1990. Since the law’s passage, no other city has been successful in securing noise restrictions as stringent as those regulating aircraft at the Long Beach Airport.

On Monday, an airport spokeswoman, Stephanie Montuya-Morisky, confirmed the letter had been received but deferred comment to the City Manager’s office.

“We want to be as transparent as possible, and we want the discussion to happen at the City Council level,” Montuya-Morisky said.