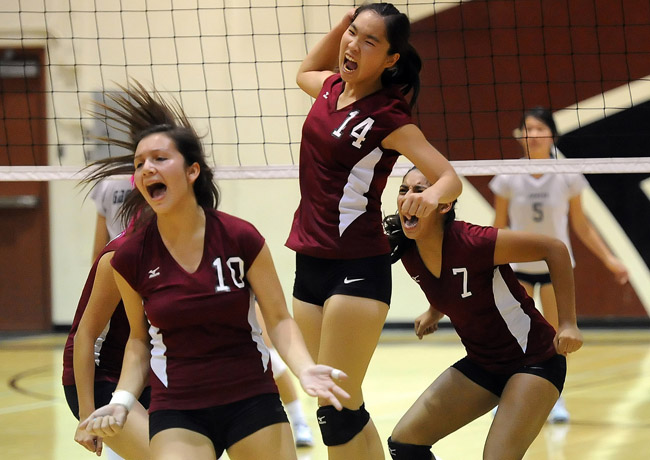 The Panthers, who last won the title in 2000 when coach Emily Hausler was a Rosemead freshman, defeated Gabrielino in three games in a league showdown.

“It was like knocking down walls, but we did it,” senior outside hitter Priscilla Franco said. “It feels great. We worked so hard all these four years. We feel we earned it. We knew it would be difficult, but with hard work and dedication and fundamentals, there was no way we could lose.”

The Panthers lost only four games in league play this season in ending the Eagles’ nine-year league championship winning streak.

“After nine consecutive league titles, being the team that lost it hurts,” Gabrielino senior middle blocker Rachel
Bustillos said. “We can use this as a stepping stone for CIF. We need to shake this game off and go harder.”

The victory was not easy. Gabrielino had big early leads in the first and second games. Rosemead, behind the serving of Taryn Higareda and Nancy Lopez, came roaring back to take substantial leads in those games. Lopez had four aces in a 10-0 run in the second game to turn a 12-10 deficit into a 20-12 lead.

“We weren’t there mentally and we beat ourselves up over little things,” Bustillos said. “Toward the end it finally hit. This could be one of our last times playing and this is for league champs.”

Gabrielino, which only lost to Rosemead in league, rallied back in the second and third games.

“We kind of last track,” Rosemead senior setter Nancy Lopez said. “We talked it out and got back on it.”

Rosemead got out to a 17-9 lead in the third game. The Panthers dogpiled in the middle of the court after a Gabrielino shot went into the net to end the match. Hausler and the players were seemingly hugging the entire student body.