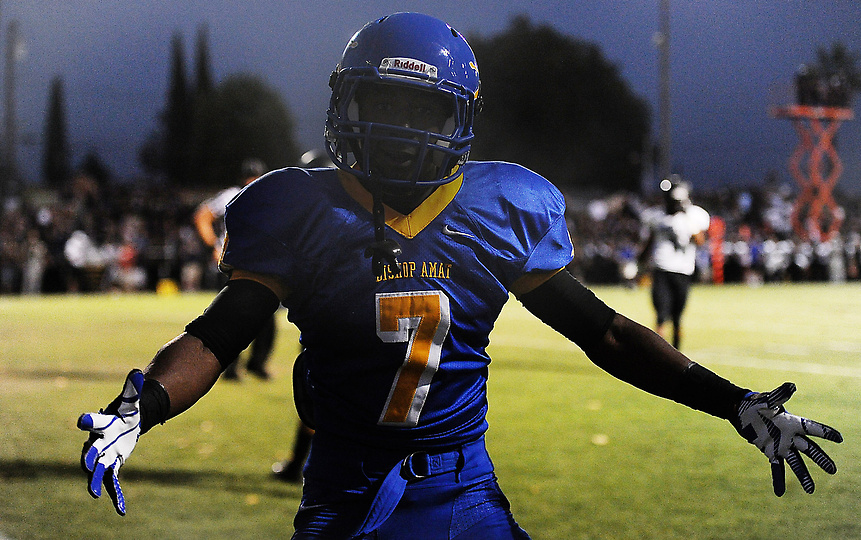 Final Top Ten Football Poll
1. Bishop Amat (7-3-1) — After you take a step back and realize the Lancers lost to the eventual Pac-5 Division champion (Long Beach Poly) for a second year in a row and how easily they defeated Charter Oak, beat Servite, La Mirada, Crespi and Loyola, there’s really no argument over the No. 1 choice at the end of the season. It’s Amat.

2. Charter Oak (10-2) — At the end of the day, Charter Oak over-achieved this season. Few predicted they would go undefeated in the Sierra for a second year in a row and would be as dominant as they were defensively. There’s a huge gap between Amat, Charter Oak and the rest, and that’s a credit to both coaching staffs.

3. Chino Hills (7-3-1) — The Huskies should have done more with quarterback Matt Simko, but then again the Inland Division is just tough. Although it lost to Charter Oak, Redlands and tied Bishop Amat, it was another good season for Coach Bub and the boys.

4. San Dimas (11-2) – This isn’t a pound-for-pound choice because San Dimas plays in the Valle Vista and Mid-Valley Division, this is where they should be ranked. They were clearly the fourth-best team in the area and would have beaten every team ranked beneath them. They gave Paraclete a run for their money on the road, it just didn’t happen.

5. West Covina (7-6) — The Bulldogs turned what looked like a disastrous season into a semifinal appearance in hopes of winning its third Southeast title. They were never healthy the entire year, but when the season was on the line they did what they had to do to make the playoffs, then nearly ran the table, racing to a 14-0 lead against La Serna in the semifinals before it all caught up with them.

6. South Hills (6-5) – For the Huskies to have a winning record considering all the firepower it lost from last year’s 3-7 team and with new coach Albert Rodriguez is a credit to their toughness. Think of it, they beat three-time Mid-Valley champion Monrovia, beat Ayala and actually gave Vista Murrieta a brief scare in the first round of the Inland Playoffs. Not bad.

7. Gladstone (10-2) — What impressed me about the Gladiators is that after losing their first game of the season to rival Azusa, they came back and played inspired football. They got their first playoff win since the 70s in a blowout win over Mary Star of the Sea and nearly knocked off power North Torrance in the second round. In coach Albert Sanchez’s final season, he couldn’t of asked for much more.

8. Ayala (6-4) – They probably should of earned an at-large berth in the Inland Division, but the again, they should have done a better job of controlling their own destiny. Ayala also had a win over three-time Mid-Valley champ Monrovia, so no doubt they deserve a top ten ranking.

9. Rowland (7-4) – Four teams finished in a tie for first in the Hacienda, but by the end of the season, only West Covina and Rowland deserve to be ranked. Although Rowland lost its final two games to West Covina and Downey, they competed with both, losing to Downey, the eventual Southeast champions, 55-21.

10. Northview (7-4) – South El Monte, Diamond Ranch, El Monte and La Puente were the other choices for the ten spot, but I’m going with Northview. They beat South El Monte head-to-head and gave Sierra Canyon a run for their money before bowing out in the playoffs.