“An hour into practice, I started calling (college) coaches I know telling them they better be over here on Friday night to see this kid. He’s really good, but nobody ever gets to see those kids.” — Damien and Tribune boys coach Matt Dunn on Arroyo’s Primitivo Gomez. 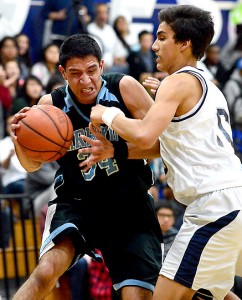 Gomez, who will play for the Tribune all-stars in Friday’s 10th Tribune/Star-News All-Star Classic, may be ready to get the word out in a big way in his final prep game on Friday night.
And there should be an audience of next-level coaches there to watch it.
“An hour into practice, I started calling (college) coaches I know telling them they better be over here on Friday night to see this kid,” said Damien coach Matt Dunn, who will coach the Tribune team. “He’s really good, but nobody ever gets to see those kids.”
The boys all-star game is set for 8 p.m. at Damien High while the girls game is at 6 p.m., also at Damien.
Gomez, a 6-foot-5 combo forward/guard, led Arroyo to a 20-win season and the Mission Valley League championship. He averaged 25.7 points per game and 10.7 rebounds.
The Star-News has had no shortage of eye-opening players in practice, either. Star-News Player of the Year Andre Spight has shined, scoring from just about anywhere on the floor. Spight will play at UTEP next season, so he’s not in need of any late-stage scouting.
But there are several other talents who have turned heads at Star-News practice, according to Flintridge Prep coach Garrett Ohara, who will coach the west-side all-stars.
“Spight is so good on the ball, he’s such a threat on the perimeter and getting to the basket, but we have several guys flying under the radar here who can get after it,” Ohara said. “Tyler Shimamoto (Gabrielino) and Felix Awujo (Temple City), this was the first time I got to see them.
“They have such great defensive tenacity, so we’re going to commit to defending well. This isn’t going to be an NBA All-Star Game.”
Shootout expected
It’s no secret that 3-point shooting was the catalyst of Temple City’s breakout season this winter. The Rams won the Rio Hondo League behind sharpshooters like Eric Olivas and Felix Awujo. Olivas hit 114 3-pointers this season and Awujo added 44. Both will be in the 3-point shooting contest at halftime of the boys game along with Spight.
The Tribune team will be represented in the 3-point shooting contest by Jared Dizon (Damien), Jordan Stokes (San Dimas) and Joseph Dionisio (Rowland).
Secret weapon
Dunn has pulled former legendary Northview coach Ron Rice out of retirement to help him coach the Tribune all-stars.
Rice retired this winter after 41 years. And if the game’s close, Dunn said he knows who he’s going to turn to.
“The most important piece of the puzzle is that we have a legend on the sideline,” Dunn said. “He’s fully prepared. I told him that if we’ve got a tied game with seven seconds to go, he’s going to have to draw up the game-winner.”
FOR ROSTERS ON BOTH TEAMS, CLICK THREAD