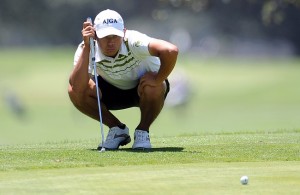 By Keith Lair, Staff Writer
Brandon Tsujimoto will be enjoying two trips to Carmel in June.
The Damien High School graduate used Brookside Golf Course for the springboard for both trips, too. He qualified for the June 17-22 California Amateur last week on the facility’s No. 1 course and earned a berth in next week’s CIF State finals by shooting a 2-under-par 70 in Thursday’s CIF/SCGA Southern California regional on the same layout.
“My game has been coming around and my scores lower and lower,” he said. “Shooting a 70, especially with the competition here, it’s a great number.”
Tsujimoto went through graduation ceremonies last week. He finished sixth in Thursday’s one-day tournament to qualify for the finals, to be held Wednesday at Quail Lodge Golf Club.
“It was a really consistent round,” he said. “It feels great to go to state for the first time and in my senior year. It’s a great way to go out.”
Five other Valley golfers tried to duplicate Tsujimoto’s feat, but none qualified for the top nine spots. Arcadia’s Johnny Lai and La Canada’s Collin Morikawa came within one shot of getting into a playoff for one of four remaining slots. They had even-par 72s.

Tsujimoto was teetering on missing the cut. The UC Riverside-bound player was at even-par with three holes to go on the par-72, 7,228-yard layout.

“I kept it steady until 10 and 11,” he said. “Those are just good birdie holes that I could take advantage of.”

He had an eagle, four birdies, a double bogey and two bogeys. His double bogey was on the par-4 third hole when he hit into a bunker and then over the green with a shot out of the rough. That put him at even par.

“I took a few breaths, calmed down, regrouped, reset and went back to fundamentals,” he said. “I knew it was not that bad. I just had to try and get it back.”

Tsujimoto is the first Damien player to advance as an individual. The Spartans advanced as a team in 2006.

Lai said he never found his footing and his drives were off. And when the senior got them going, he hit over the green on two key holes and had to settle for pars.

“I hit really, really badly,” he said. “My first birdie was a 30-footer that was not supposed to go in.”

He was even par with six holes to play but missed a 10-footer for eagle. He birdied the No. 1 hole, his final of the round, to finish at even par.

Morikawa, a sophomore, eagled his final hole, the par-5 15th, to get back into contention.

“That helped so much,” he said of the eagle. “But nothing really went right for me. I was not really making putts.”

“I started firing after that,” he said. “I played all right after that start.”

He finished on the par-5 15th hole and needed an eagle to get into a playoff. But he put his second shot into a tree and finished with a par.

“The greens were fast and it was challenging,” he said. “I had to eagle that last hole, but it is all right.”

Arcadia’s Bryan Shin was in contention until three holes to go. He finished with a 3-over-par 75.

He was 1-under par when he hit his driver out of bounds on the 18th.

“I knew there was trouble on the right and I did not want to think of it, and I just pushed it,” he said.

He finished with a triple-bogey 7 on the 468-yard hole that borders the north end of the Rose Bowl.

Glendora’s Cameron Gorski shot a 5-over-par 77. The senior was fine after starting with five consecutive bogeys, but he played even par in the final 13 holes.

“It was a bad start, but it was a good finish,” he said. “If I could just have the first five holes over again. The score did not reflect how I played in my mind.”
Return to Top