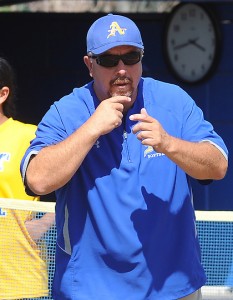 Bishop Amat softball coach Jesse Mendez, who guided the Lancers to back-to-back CIF-SS semifinals appearances in 2011 and ’12 before being upset in the second round this season, has resigned to pursue other softball coaching opportunities and a full-time position in his field. Mendez was 125-51 in six years as the head coach, leading the Lancers to four 20-win seasons and four league championships. Mendez, a walk-on coach at Bishop Amat, is looking for a position in a public school that offers a Regional Occupation Program teaching position, for which he is certified. Amat does not offer a ROP program.”I also plan on substituting in the Hacienda-La Puente school district,” Mendez said. “At Amat, you need to be there throughout the day, so it would be difficult to substitute and continue coaching. I loved it there and have a lot of great memories.” Mendez wanted to remain at Bishop Amat and the school wanted to keep him, but Mendez said it became difficult financially to continue. Mendez also organized the San Gabriel Valley All-Star game this past season. Bishop Amat athletic director Michael Manzo said the school will offer a full-time teaching position, preferably in English or History, as part of a package deal for its next softball coach. Those interested should contact the school.