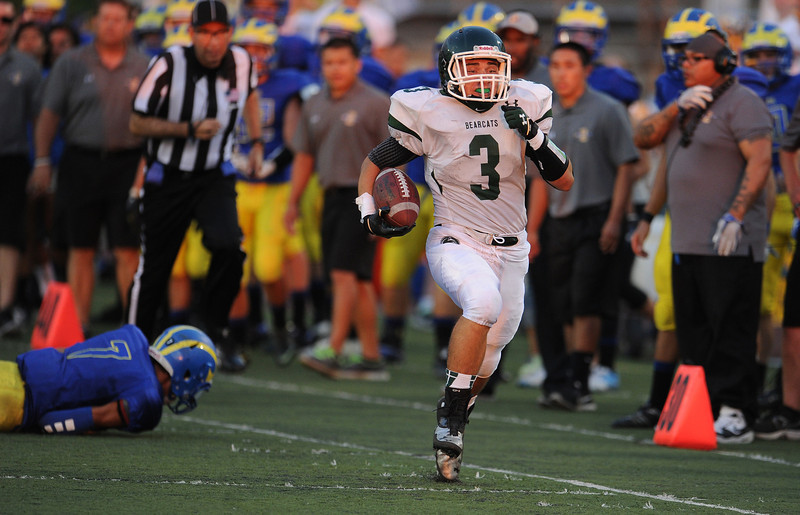 Bonita gets back Smudge: There was no fantastic finish at the 41st Smudge Pot game between Bonita and San Dimas High schools.
That’s the way the Bearcats, who were on the wrong side of an amazing ending last season, like it.
Tanner Diebold threw for 255 yards and three touchdowns and Bonita shut down the Saints’ usually high-powered offense and the Bearcats earned some redemption from last season with a 33-13 victory over San Dimas

Northview opens season in rout:
Rookies are not supposed to do what Peter VanDerEb did Thursday night. Making his first start in his first high school football game, the Northview High School quarterback passed for 161 yards and two touchdowns to lead the Vikings to a 40-0 victory over Ontario in the season opener for both teams at Covina District Field.
Smudgepot Boxscore
Bonita- 14 12 0 7- 33
San Dimas- 0 6 7 0- 13

Scribble Live with Mike the Cousin launches at 6:30 p.m.

Your PrepXtra Preview Football Magazine is in ONLINE and in today’s newspaper, and you can also purchase it at tonight’s Smudge Pot, look for the booth outside the game. We’ve got the Smudge covered, video, game stories and of course, Mike the Cousin is back on Scribble Live, and Tom Kiss has your video highlights and postgame interviews. Anyone that wants to participate in tonight’s chat, use the hashtag #footscores. You can also follow me at the smudge, I’ll tweet updates to @sgvnsports and Keith Lair will tweet Northview updates @keithllair.