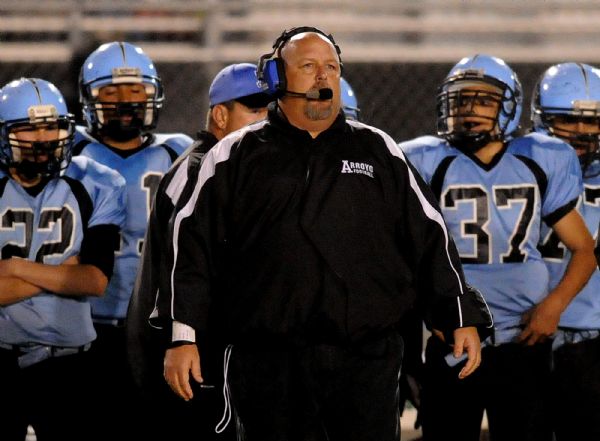 By Aram Tolegian
A short week punctuated by a holiday is not exactly the most optimal situation for trying to teach a bunch of teenagers how to defend the Wing-T offense.
But Arroyo coach Jim Singiser said he and his staff will make the best of it as they prepare for Friday’s semifinals showdown against San Dimas.
The Saints run the Wing-T offense, which some teams simply don’t ever see otherwise until they play San Dimas. That’s the situation Arroyo is in this week and it’s got Thursday’s Thanksgiving holiday to contend with, too.
“If they go out and drop 50 or 60 on us, then I’ll tell you it was a difficult task,” Knights coach Jim Singiser said. “Our scout team can’t run in two days what San Dimas has been running in five years. That’s the problem, you can’t simulate it.
“And even if you can, San Dimas will do it better on Friday.”

San Dimas’ offense is simply rolling at present. The Saints are averaging just over 40 points per game. Arroyo can put up points, too, but somewhere along the way the Knights are going to have to come up with some stops.

San Dimas (8-4) smashed Gabrielino and San Marino to reach this point. Arroyo (11-1) got to this point by narrowly edging Baldwin Park, then leading start to finish against Schurr.