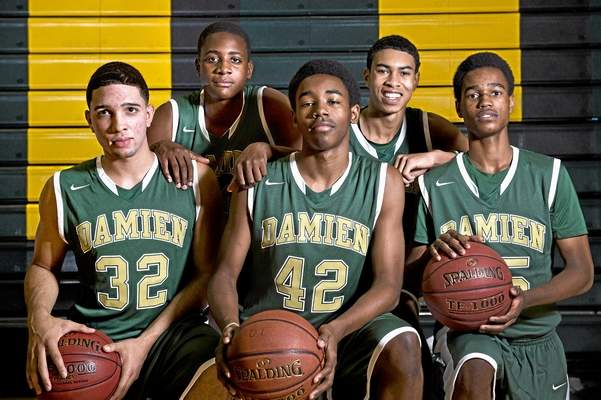 By Stephen Ramirez
Damien High School enjoyed a magical season in 2012-13.
The Spartans, after some heart-breaking close calls in recent years, finally broke through, winning the school’s first CIF-Southern Section boys basketball title, with the 3AA Division crown and advanced two rounds in the state playoffs.
What do they do for an encore?
Win another?
The task won’t be easy. Damien, for one has moved to four levels to Division 1AA, but with star Jeremy Hemsley, who went from inexperienced sophomore to Area Player of the Year, anything is possible. But for now, coach Matt Dunn will concentrate on the journey, which begins next Friday with a nonleague game at home against Sunny Hills.
“This is obviously a whole new group,” said Dunn, whose Spartans begin the season ranked No. 1 in the area. “We return some guys, but we have guys with new roles, and guys who are new, so the dynamic of the whole group changes. They’re better be a fire (to repeat). At this point, no one really cares what happened last year. This is its own individual journey.
“I think our guys understand that. We practice hard. I think we have a pretty high potential, but we have a ways to go to meet that potential, too.”
It’s starts with Hemsley, who is the key for Damien. The junior, who also was Division 3AA Player of the Year, averaged a team-high 19 points per game, while also bringing in 6.1 rebounds per contest. But also, if there was a key play to be made, Hemsley made it, including scoring seven points down the stretch to clinch last season’s title run in the championship game.
“I think he can be a lot better,” Dunn said of his star. “He’s the hardest worker on our team. I think he’s bigger than stronger, improved his shooting and he’s improved as a leader. Last year, he was a leader by example, now we need him to be more vocal.”
Damien, which lost first team All-Area guard Jared Dizon to graduation, also features junior wing Malik Fitts, who is expected to fill Dizon’s role as the No. 2 option; junior wing Isaiah McCullough and forward Thaddeus Smith. But this is a deep, experienced squad that features nine returning players.
“We have an awful lot of potential,” Dunn said. “Offensively, this is the most talented team we’ve had. And I think our kids are really good about sharing the ball. That’s a good place to start.
“But we don’t talk about winning and losing, just improving and reaching our potential. If this team is able to do that, I think at the end of the season, we’ll have a chance to win some games and see what happens then.”
FOR THE REST OF THE TOP TEN, CLICK THREAD. (Note, Chino Hills, Ayala and Claremont will not be included in the Tribune rankings. They will still be part of our Sierra League coverage, but they will be ranked and considered for all-area exclusively in the Inland Valley Daily Bulletin, our sister paper.
2. GLENDORA (19-11)
The Tartans are again expected to be a player among area teams.
Glendora returns five players, including guards A.J. Bignoria and Thomas Rico. Both were first and second team All-Area, respectively, and keyed the Tartans’ run to the Division 2A quarterfinals, beating traditional power Dominguez before losing to Redondo.
Bigornia and Rico were solid down the stretch and will get help from forwards Brandon Brothers and Kyle Bracy and center Joseph Alvarez.
The Tartans will still have it rough in the challenging Baseline League, but should be highly competitive during the December tournament season and in the playoffs.

3. BONITA (25-6)
The Bearcats are another traditional power who loses players to graduation every season and still manages to be one of the area’s best.
This season will be no exception.
The star again will be Dane Hollar, who ranked among the area leaders in scoring and earned co-league MVP. He will be a key if Bonita is expected to continue its streak of Hacienda League crowns, which is three and counting.

5. WALNUT (16-11)
This could be a banner season for the Mustangs, who return four of their top six scorers, including their top three.
The group is led by first team All-Hacienda League players Rob Harrelson, who averaged 12 points a game, and Lawrence Besong, who put up almost 10. Walnut, which was tied for fourth in the Hacienda League, will also feature Jeff Huang (8.1) and Zuri Williams (6.1).

6. ROWLAND (19-9)
The Raiders, who finished second to Bonita in the Hacienda League, lost all five starters to graduation. But coach Gordon Hamlow believes this team, while young, can find itself by the league season and be Bonita’s chief challenger again.
The keys are Junior Hernandez, who averaged 3.1 points a game in a limited role last season, and Elijah Beasley, who is up from the junior varsity.
Other key players will be forward Matt Kinkead and James Yazamut and Sebastian Bohorquez, who were the junior varsity’s co-MVPs.

7. SAN DIMAS (16-11)
The Saints, with two key players back, are the favorites to dethrone Covina from the league crown.
San Dimas will feature guards Ryan Occampo, who averaged six points a game, and Greyson McGee, who averaged 5.3.

9. WORKMAN (26-2)
The Lobos are again the favorite in the Montview League.
They lost their top scorer in Osnar Garcia to graduation, but still have a strong nucleus returning.
The leaders will be John Paul Rodriguez, who averaged 13.7 points per game, and Noah Juarez, who averaged nearly five a game.

10. WILSON (16-13)
The Wildcats finished strong last season and look to continue that surge this season. They will challenge San Dimas and Covina in the Valle Vista League.
Wilson will be led by returners Erick Ramos, who averaged 6.4 points a game, and Kyle Price, who scored at a 5.9 clip.
Others to watch this season include Arroyo (20-7), Bishop Amat (15-13), Gladstone (18-7) and Baldwin Park (18-11).