HACIENDA SHOCKER: Big news on Tuesday is that Bonita knocked off defending Hacienda league champion Diamond Bar 1-0 in overtime. That momentarily puts Los Altos (12-2-3, 6-0-1) in sole possession of first with Diamond Bar (12-3-3, 5-1-1) second and Bonita (6-9, 4-2) in the title hunt on the outside looking it. Next Tuesday is the biggie when Diamond Bar visits Los Altos… 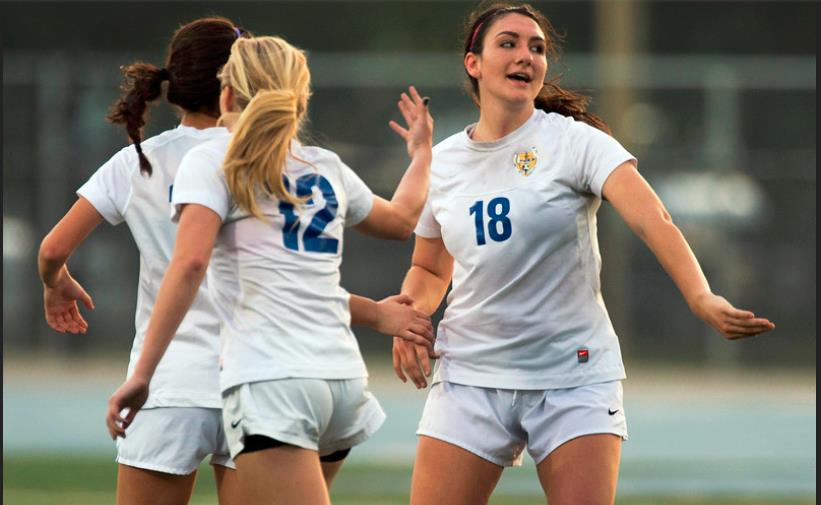 By Stephen Ramirez
@SteveRRamirez on Twitter
SAN DIMAS >> San Dimas High School has been the dominant girls soccer program in the Valle Vista League in recent years, and that doesn’t appear to be changing this season.
Senior Morgan Quaternik scored in the 72nd minute and the host Saints solidified their league lead with a 1-0 victory over Wilson on Tuesday. San Dimas stretched its league winning streak to 40 games.
San Dimas, with senior Daisy Duran getting the assist, improved to 13-6 overall and 8-0 in league play. The Saints are 2 1/2 games ahead of Baldwin Park, which beat Nogales on Tuesday. Wilson, which got 11 saves from senior goalie Minerva Lopez, slipped to 9-7-3 and 5-3 in league play. The Wildcats lost 1-0 for the second consecutive day, also losing to Nogales on Monday.

Duran, who was stopped by Lopez on a shot from just inside the penalty area in 66th minute, forced a cornerkick in the 72nd minute. She then lofted a crossing passing, which Quaternik was able to head to the left of Lopez for the 1-0 advantage.

San Dimas coach George Duran: “It was really important, because of the last time we played (Wilson), playing them in the rain with one girl down. It was really important. The girls wanted to come out here (and get the win) on our field.”
Wilson coach Ricardo Recinos: “That was the gameplan. They have the size, the speed, so we wanted to let them come to our side and try to get the counter attack. We had a couple of them, but unfortunately, we couldn’t put them in.”

San Dimas’ Morgan Quaternik: “Daisy and I connect really well together. She always finds me when she takes cornerkicks. When she was running up to (kick it), I just knew where I was supposed to be and when I was supposed to drop by head. I just felt it.”
Wilson’s Minerva Lopez: “It was last minute, and nothing you can really do about it. All we can do is learn from our mistakes.”

VIDEO: Bishop Amat freshman Sofia Serafin scored twice to raise her season total to 17, but visiting St. Joseph’s scored in the final 15 minutes to help secure a 2-2 tie. Amat, the defending Division 3 champions, had several chances to win in the final minutes and overtime, but St. Joe’s missed its share of chances to win as well. Amat coach Ruben Gonzalez, freshman Sofia Serafin and goalkeeper Evelyn Fiero talked about it afterward …

Below: Highlights from Claremont’s shocking 2-1 girls soccer victory over Chino Hills on Friday 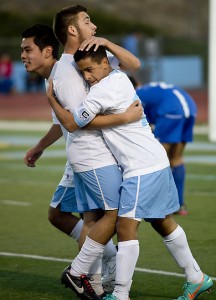 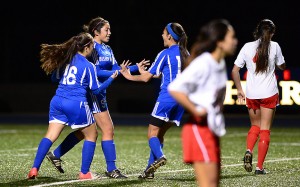 DYNAMIC DUO: Senior guards Nikki Wheatley and Kandyce Smith combined for 45 points as Bonita won the battle between two unbeatans, 57-42, over Diamond Ranch on Monday to take over sole possession of first place in the Hacienda League.

The win was Bonita’s seventh consecutive victory in head-to-head play against the Panthers, who haven’t lost a league contest to any team other than Bonita since February 2008.

FUNDRAISER: Ted Persell coached at Bonita High School for just one season, but he made enough of an impact that Bearcats coach John Knott wanted to honor the former Valley player and coach, who died in an auto accident in December.
Bonita will host Alta Loma at 6:30 p.m. on Wednesday in an exhibition game that will pay tribute to Persell and lend support to his family, which includes a sixth-month-old daughter, his girl friend, three sisters and a brother.
There will be no admission charge, but donations of any amount will be accepted, and all money made from the snack bar and concessions, along with a 50/50 raffle will go to his family, who will also be honored before the game.

By Stephen Ramirez
@SteveRRamirez on Twitter
WALNUT >> Walnut High School didn’t win the Hacienda League boys basketball championship Monday. But the Mustangs took a major step.
Jeff Huang scored 20 points and Walnut took control of the league race after withstanding a furious second-half surge from Diamond Bar to score a 56-53 victory over the visiting Brahmas.
Walnut, also getting 9 points each from Zuri Williams and Richard Rycraw improved to 16-5 overall and 6-0 in league play to hold a two-game lead over Diamond Bar, which slipped to 7-14 and 4-2.

The Brahmas, after two free throws by Williams with 14 seconds left, had a chance to tie the score, but Bobby Meshesha missed back-to-back 3-pointers in the final 10 seconds. Leo Li led the Brahmas with 17 points.
Walnut, after making 15 of 26 shots, including five 3-pointers in the first half, looked like it might cruise to the win after taking a 38-19 lead after the first two quarters. But Diamond Bar got back into it, holding the Mustangs to two field goals in the third quarter to cut the deficit to 43-37 going into the fourth before getting within three on an Evon Shubin putback with 57 seconds left to play.

Walnut coach Josh Cameron: “They’re are our true rival. No one is going to quit on that rivalry, whether you are up by 20 or down by 20. But our guys were resilient. We have some three-year varsity players, so they are used to this.”
Diamond Bar coach Henry Frierson: “It’s not the way we drew it up. We got two good looks at the rim, and in a game like this that’s all you can ask for.Bottom line, is that we just dug ourselves too deep of a whole in the first half. The second half we made a valiant effort. But it was just too little, too late.”

TOUT VIDEO: Keith Lair, Steve Ramirez, Aram Tolegian, David Felton and I will post 45 second video interviews, highlight clips and whatever during the prep season. You can view them all on this widget by simply watching and scrolling down. Most recent video’s appear first. 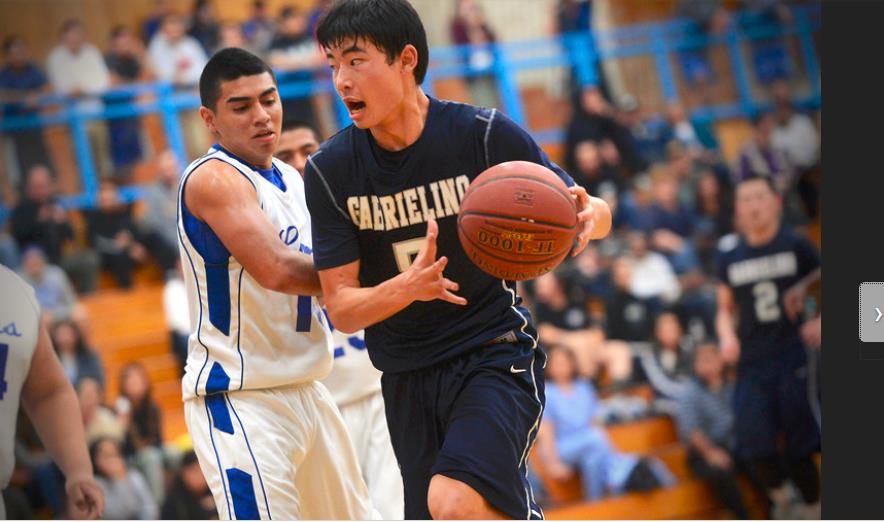 GABRIELINO 67, EL MONTE 45
Gabrielino High School came up short in its quest to win the Mission Valley League boys basketball championship last season.
The Eagles are determined to come through this time, and they took another step Friday night.
Grant Kirchhoff scored a game-high 23 points and 19 rebounds and Gabrielino remained perfect in league play with a 67-45 victory over host El Monte.

Bryan Phan had 16 points for Gabrielino, which improved to 16-3 overall and 4-0 in league play. The Eagles are at South El Monte on Wednesday. South El Monte was 3-0 going into a league game vs. Arroyo on Friday.
Jacob Moran and Joe Chavez scored 10 points each for the Lions, who slipped to 13-8 and 2-2.
Gabrielino put this one away after outscoring El Monte, 41-13, in the second and third quarters.

Gabrielino coach John Carney: “It’s nice to get another win on the road against a league team. We didn’t’ play as well as we would have liked. But we got the win, and we’re moving on.”
El Monte coach Eric Tabatabai: “They keep coming and it’s very fast-paced. When our guys got a little tired, we made some turnovers that resulted into easy layups. You have to play the whole game. The middle of the game was definitely costly.”
Gabrielino’s Grant Kirchhoff: “It’s a great victory for us,” Kirchhoff said. “We’re kind of on the road to winning league, so this was one stepping stone.”
– Stephen Ramirez, @SteveRRamirez on Twitter

DAMIEN 66, SOUTH HILLS 49
Damien got a spark from its defense in the second quarter and came from behind to beat an upset minded South Hills team, 66-49, Friday night.
The win keeps the Spartans, (18-3, 4-0)the Tribune’s top-ranked team, on top of the Sierra League standings as they head for their matchup with Chino Hills next Wednesday that will be for first place.
Trailing by eight points, the Spartans went on a 15-0 run in the last 3:18 of the second quarter to take a 25-18 lead at the half and take control of the game.
The Huskies (10-11, 1-3) started the second quarter on a 10-2 run, including 3-pointers by Jacob Estrada and Josiah Sotomayor that gave them an 18-10 lead with 4:20 to go in the half before Damien put the blitz on.
The Spartans had three players in double figures, led by Jeremy Hemsley with 22 points. Malik Fitts had 14 points and Tyler Ginyard had 12. Jacob Estrada had 15 points to lead the Huskies and Chris Martin had 11.
Damien coach Matt Dunn: “I thought we played really hard. We just didn’t make shots. Even though we weren’t shooting well we were rebounding and playing defense and eventually our defense got us going.”
– John Honell
ETIWANDA 66, GLENDORA 24
No typo, Etiwanda holds Glendora to what must be an all-time low, although I can’t remember the last time the Tartans didn’t score in the 30s. Thomas Rico led Glendora with eight points. The Tartans are just counting the days they get shipped to the Palomares League.