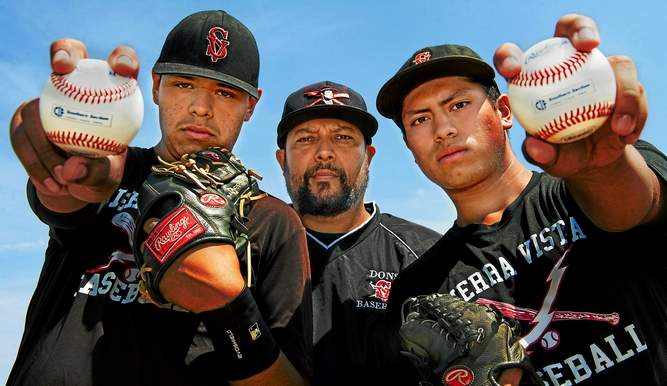 By Fred Robledo
BALDWIN PARK — Talk about paying it forward.
The last time Sierra Vista High School’s baseball team reached the CIF-Southern Section divisional quarterfinals was in 1993 led by pitcher Pedro Flores, who went on to play at East L.A. College and was later drafted in the 18th round by the Los Angeles Dodgers in 1996, where he spent over 10 years in the minors with several different organizations, reaching Triple-A on many occasions.
Dons head coach Brett Stevens has been in charge 26 years and coached Flores, who he still considers the Dons’ all-time best and who holds most of the Dons’ pitching records.
Fittingly, Stevens and Flores are back at it together, leading Sierra Vista back to the quarterfinals for the first time in 21 years.
Sierra Vista (21-3), which set a school record for wins in a season, will take on top-seed Santa Ynez (26-1) on the road in Saturday’s Division 5 quarterfinals at 2 p.m., with a chance to earn its first semifinal berth in history.
Flores, who threw four consecutive shutouts when he was dominating in the 90s for the Dons, has been the pitching coach at Sierra Vista for nearly a decade, and has done a remarkable job grooming senior pitchers Eric Gutierrez (9-1, 1.22 ERA) and Andrew Luna (7-0, 1.79 ERA).
“Pedro was my number one pitcher three years in a row when he was here and most of the credit goes to him when you talk about our pitchers, and what we’ve done with our pitchers over the last few years,” said Stevens, who started at Sierra Vista in 1989. “He’s an incredible coach and the players respect him.”

Pitching has been the backbone for Sierra Vista since Flores joined Stevens, which has led to five Montview League titles in the past six years.
There was Christian Huerta who was 8-2 with a 1.96 ERA in 2010 and Elias Novello, who was 9-1 with a 1.72 ERA in 2012.
And year-by-year the team ERA is remarkable.
The Dons had a team ERA of 2.06 in 2010, 2.10 in 2011, 1.81 in 2012, 1.36 in 2013 and boast a 1.71 ERA this year.
“You don’t do anything without pitching,” Stevens said. “You still got to score runs, but success starts with pitching.”
Flores said the secret formula is respect and hard work.
“I try to get them to believe in themselves,” Flores said. “They work hard, they’re running and they’re coachable. That’s important, because if we say something they’re digging it, they understand and feed off each other. If one guy does well the other wants to one-up him.”
Flores is also a legend, so when he talks, they listen.
“One thing you do is find what motivates (them),” Flores said. “If it’s pro ball, you talk about stories, how this could be you, how I came to the same school and I’m from the same town. You tell them to go out there and apply yourself and do everything we’re telling you to do. If we get your fundamentals down and your mindset is right, you can do big things.”
One the Dons are glad to have healthy it Gutierrez, who was sidelined early last season after breaking his arm. He had some plates and pins put in his non-pitching arm and has returned with a vengeance.
“It means a lot to be back,” Gutierrez said. “I missed more than half the season and wanted to come back and be the best that I could be. I wanted to be the ace again and worked hard to get back here.”
Gutierrez will likely start Saturday’s game.
“He didn’t do anything until October of last year,” Stevens said of Gutierrez. “He was off for a good eight months. It was a crushing blow but what it did was make Luna our number one guy last year and that’s the silver lining. He pitched under the pressure and got that experience. Now, they’re both pitching like number one’s and they’re both seniors.”
They’re the perfect combination, one’s a righty (Gutierrez) and the other a lefty (Luna) and each have their own strengths.
“(Gutierrez) is a complete pitcher, he throws three pitches for strikes and has a devastating change-up,” Stevens said. “He can spot all three pitches wherever he wants, has good command and his strikeout to walk ratio is very good. And he’s just unflappable on the mound.”
Then there’s Luna.
“He gets it done, he just gets it done,” Stevens said. “He is someone who sometimes struggles with his control, but that kind of makes him wild enough to be hard to hit. He’s kind of wild within the strike zone, and that bothers batters.”
The way Luna looks at it, the Dons have the same problems as the Dodgers.
“I always mess around that we have the (Zack) Greinke-(Clayton) Kershaw problem,” Luna said. “We have two aces. We don’t have to rely on one guy, it takes a lot of pressure off both of us.”
For Stevens, it felt great to finally get past the second round after more than two decades and the Dons did it with ease posting a 9-3 second-round victory over Hemet.
“We’ve won a lot of first-round games in the past and that’s because we’ve had a solid number one pitcher,” Stevens said. “To get past the second round and compete in the playoffs you need to have that other guy.
“This year we finally feel like we have the one-two that allows you to rest each guy and have a chance no matter who you’re up against.”
Even though Gutierrez is throwing Saturday, Stevens knows they face a huge uphill battle against once-beaten Santa Ynez who has two pitchers that are 8-0 with a team ERA of 1.51.
“They’re the real deal, they score runs, they pitch great and are the obvious No. 1 team in our division,” Stevens said. “But we’ve faced some good pitchers in the first two rounds and swung the bat well.
“We’re going for it. Our players have started to taste some of the success and I’ve got 10 seniors that have worked their tails off for four years. We’re going to go there and give it all we’ve got.”