CLUTCH: Northview’s Jake Amaya’s belts a walk-off homer in the eighth inning to lead Northview to a 2-1 victory in eight innings over No. 1 Kaiser in the second round of the Division 4 playofs. Northview rallied to tied the score, 1-1 in the bottom of the seventh.

STORY: It might not be the Northview High School baseball team’s biggest win its history, which includes two CIF-Southern Section championships, but it’s certainly high on the list.
Jose Urbina hit a run-scoring double with two outs in the seventh inning tied it and Jake Amaya hit home run in the bottom of the eighth as the host Vikings ousted top-seeded Kaiser 2-1 in a Southern Section Division 4 second-round game Tuesday.
“I’m feeling great,” Amaya said. “I got that high pitch and did what I had to do, and that was the outcome. I’m just speechless right now.”

GLENDORA FALLS TO La Mirada, 4-2
By Fred J. Robledo
GLENDORA — After assistant coach Jimmy Zurn finished his post-game speech following La Mirada’s come-from-behind 4-2 victory over Glendora in the second round of the CIF-Southern Section Division 2 baseball playoffs, the Matadores players turned toward left field, pointing and waving.
They were saluting head coach Kim Brooks, who waved back, then turned and walked away.
Brooks was placed on administrative leave last week prior to the playoffs after a profanity-laced audio of him screaming at his team following a spring break tournament game surfaced and made national headlines.

Columnist Frank Girardot apologized to high school coaches in today’s column, titled “No excuses for throwing all coaches under the bus.” Girardot took a lot of heat for last week’s column when he addressed the profanity-laced tirade that made La Mirada baseball coach Kim Brooks famous for all the wrong reasons. But what seemed to touch the wrong nerve for most, especially high school coaches, was a sentence in the column that read, “Seriously, who grows up wanting to be a high school baseball coach.”

By Stephen Ramirez
steve.ramirez@langnews.com
@SteveRRamirez on Twitter
FONTANA — San Dimas High School softball coach Don Pollard took a gamble Saturday.
Jurupa Hills’ Brittany Vicary made him pay for it.
The freshman outfielder lined a single to left field to score Vanessa Salas in the bottom of the seventh inning and the host Spartans scored a 2-1 victory in a CIF-Southern Section Division 5 quarterfinal game.
Natalie Calderas tossed a three-hitter and struck out 13 for No. 1 seed Jurupa Hills, which improved to 24-5 and will face either Ontario Christian or Paraclete in Tuesday’s semifinals. San Dimas, which got a home run from catcher Janell Wheaton, finished 22-8.
Jurupa Hills started its winning rally with two outs in the seventh when Salas drew a walk. San Dimas starter Lindsey Hughes, who gave up three hits and struck out five, then walked Marci Arevalo. Pollard then made the decision to bring in sophomore Alondra Reynoso, who was wild on her first pitch, advancing to runners to second and third.
Vicary then lined a single that just fell in front of left fielder Davina Doran, scoring Salas for the game-winner.
Jurupa Hills’ Brittany Vicary: “It was real nerve-racking, because my hitting hasn’t been my best. But I made sure I stayed focused and did what I have to do. Everything being so close, we all have to make sure we stay focused, so we can do what we have to do and win. It feels really good, because we’re on our way to winning CIF.”

San Dimas coach Don Pollard: “I thought if we could give Lindsey a break — I wanted to put her back in the next inning — and get her relaxed a bit. It was a mistake on my part. It was a tough situation for (Reynoso) and they just hit her.” 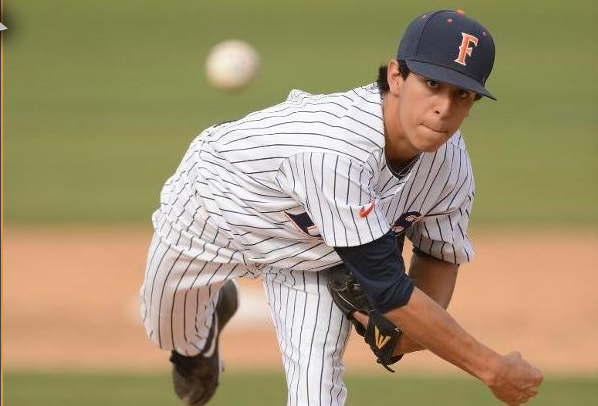 From Fullertontitans.com
FULLERTON, Calif. – The night began with a tribute to the past as Cal State Fullerton honored members of the 1984 and 2004 national championship teams prior to Friday night’s game, but it was the future that stole the show by the end of the night, making a little history along the way.
Sophomore Justin Garza tossed the fourth no-hitter in Titans history as the Titans defeated Cal State Northridge 3-0 in a Big West Conference contest at Goodwin Field.
Garza’s masterful performance added his name alongside Kirk Saarloos, Ted Silva and Longo Garcia as the only other Titans to toss a no-hitter in the program’s 40-year history in NCAA Division I baseball. Saarloos was the last Titans pitcher to accomplish the feat, no-hitting Pacific on Apr. 9, 2001 in a 28-0 win over Pacific.
“With all the alumni and all the great players that have come through here and to have my name on that board is just a big honor,” Garza said. “I still can’t believe it; right now it just feels like I’m floating and everything is not really real.” 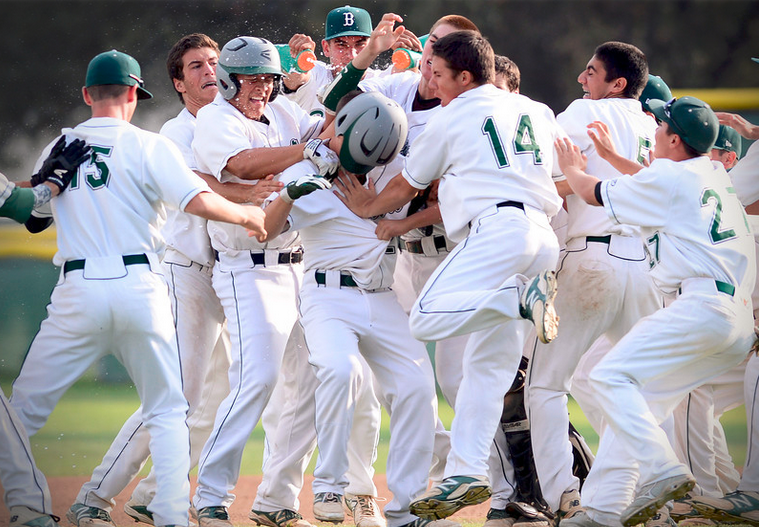 Bonita celebrates after Noah Williams (20) brought in Brandon Bradshaw (2) in the ninth as they defeated Cathedral City 3-2 after tying up in the seventh on the last out Friday, May 23, 2014 at the La Verne High School. (Photo by Sarah Reingewirtz/Pasadena Star-News)

LA VERNE — There are times when the Bonita High School baseball team looks dominated, but the Bearcats always seem to recover when it’s least expected.
Bonita, which had late come-back wins against Walnut and Diamond Ranch during Hacienda League play, did it again Friday, pulling out victory from the defeat by rallying for a 3-2 win over visiting Cathedral City in a Division 3 first-round game.
Sophomore Anthony Cascarano hit a two-out, two-run triple to tie it in the seventh and sophomore Noah Williams singled in the winning run in the ninth as No. 2 seed Bonita improved to 23-7 and will face Redondo, a 1-0 winner over La Salle, in Tuesday’s second round. The site will be determined by coin flip.
Sabino Ramirez gave up six hits and struck out seven for the Lions, who finished 12-13.
Bonita’s Anthony Cascarano: “This team has a lot of heart. We don’t stop from bleeding. I really wanted to do it for my team, for the seniors. I didn’t want this to be their last game. When I got down 0 and 2, I got scared. I just tried to put the bat on the ball. When I saw the ball fall and saw coach (John) Knott’s face, I was really happy. Nothing can feel better than that. It was great.”

Bonita’s Noah Williams: “I was just trying to get a base hit and bring it back to our team I didn’t want to see our seniors go down like that. It was just a great feeling.”

BISHOP AMAT 11, ELSINORE 0
By John Honell
Correspondent
LA PUENTE — Every coach, in every sport, wants his team to get hot heading into the playoffs.
The Bishop Amat baseball team appears to be hot at the right time, winning its sixth consecutive game, an easy 11-0 victory over Elsinore in the first round of the CIF-Southern Section Division 3 playoffs.
The Lancers (17-11) will play the winner of the La Quinta/Orange contest next Tuesday at a site to be determined.
Jayson Gonzalez had two hits and three RBIs and Alex Garcia pitched a four-hit shutout for the Lancers.
Bishop Amat’s Alex Garcia: “The first (playoff) game is always the toughest. Once you get it under your belt I’m sure it’ll be fine. We had a good scouting report on these guys and I was able to throw pitches where the coach called them. Our defense was great and we’re playing championship ball right now and that’s what we need to be doing.”
Bishop Amat coach Andy Nieto: “Our Achilles heel has been getting on a team early then losing focus. We let teams get back in the game but today we got them on the ropes and applied the knockout punch, that’s the difference.”

By Stephen Ramirez
steve.ramirez@langnews.com
@SteveRRamirez on Twitter
SAN DIMAS — If the San Dimas High School baseball team is to have a lengthy stay in the CIF-Southern Section playoffs, the Saints are going to need solid efforts from pitcher Peter Lambert.
The junior showed why Thursday.
Lambert took a perfect game into the seventh inning before finishing with a 1-hit shutout to lead host San Dimas to a 6-0 victory over Grand Terrace in a Division 4 first-round game.
San Dimas, also getting two RBIs from Elias Orona and two hits each from Jonathan Longtin and Michael Starns, improved to 22-6-1 and advanced to face either Granite Hills in Tuesday’s second roun. The site will be determined by coin flip on Friday.
Josh McPherson had the only hit for the Titans, who finished 14-12-1.
San Dimas’ Peter Lambert: “It’s a great win. Obviously, it’s the first round, but it’s a great win and we’re on to the next one. This was really on the defense. They made great plays. I only struck out six, so I put this one on the defense.”

San Dimas coach Mike Regan: “That was a tough one (to give up in the seventh). We always think our guy should have made the play. We did very, very well.”

Grand Terrace coach Mike Reh: “Lambert was excellent today. Obviously, when you’re getting perfect-gamed, it’s extremely difficult to get anything going. His tempo was phenomenal. Sometimes you just have to tip your cap to an outstanding performance.”