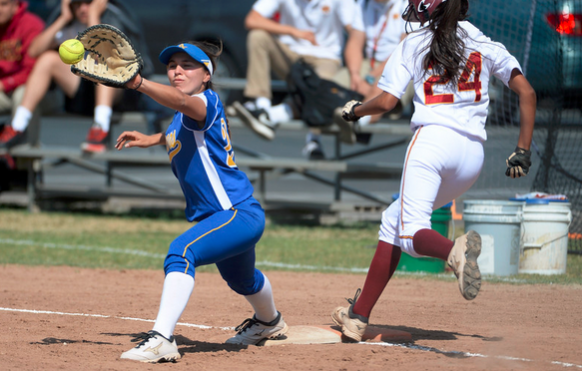 Cantwell’s Alyssa Del Campo (24) is called out at first base, but appears to beat the throw as Bishop Amat’s Julia Menrad waits for the ball in the first inning of a prep softball game at Cantwell Sacred Heart of Mary High School in Montebello, Calif., Thursday, April 30, 2015. Bishop Amat won 17-0. (Photo by Keith Birmingham/ Pasadena Star-News)

MONTEBELLO — Cantwell High School began the week with an outside shot for a Del Rio League title.Bishop Amat put an end to those hopes early Thursday.Alyssa Barrera and Madeline Ramirez each had four RBIs to lead the Lancers to a 17-0 victory over the host Cardinals in a Del Rey League game that was halted after five innings due to the 10-run rule. Ramirez and Barrera had three and two hits, respectively, for Amat, which improved to 15-6 overall and 8-1 in league play. The win keeps the Lancers tied for first with St. Paul, who they face on May 11. Britney Huerta and Julia Guzman had singles for the third-place Cardinals, who slipped to 12-10 and 4-5.Cantwell lost to Amat, 3-0, on April 14, and the Lancers made sure early this one would be different. They scored three runs in the first and seven in both the third and fourth to put it away.