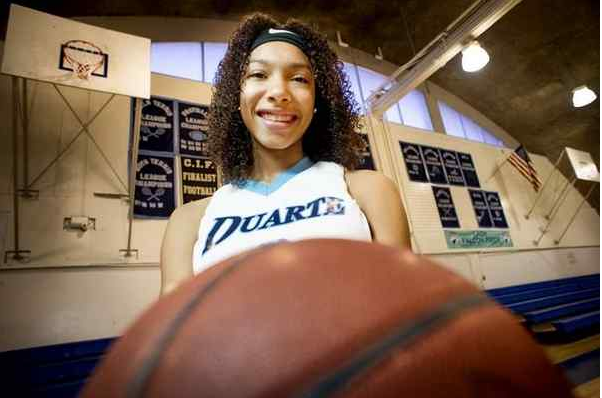 Girls Basketball Top Ten Preview by Keith Lair
The Duarte High School girls basketball program has been no stranger to success.
The Falcons have had four 20-plus winning seasons in the last four years and have been to the CIF Southern Section playoffs every year since 2010. They went to the CIF State tournament in 2010 and reached the quarterfinals of the CIF-SS divisional playoffs last year.
But the Falcons appear to have stepped up their game. They have hired Scott Wiard as head coach. Scott helped his father, Richard, to two CIF State and five CIF-SS titles at Bishop Amat.
“They’ve had a pretty good run the last five years and we’re trying to build on that,” Scott Wiard said. “The kids are used to competing at a high level. We’re trying to build a CIF championship program and when we came from Amat we thought we can do it here.”
The Wiards, with Richard as an assistant coach, will find the cupboards are not bare. The Falcons have two of the best players in the west San Gabriel Valley, which is why they earned the preseason No. 1 position.
Six-foot-seven sophomore Patricia Morris is back, along with a top point guard and a top scorer.
Morris averaged 9.2 points and nine rebounds on a team that went 20-9 last year.
“From May until now she is so much better,” Wiard said. “She presents problems with her height. She is such a good athlete. She played tennis and has improved her footwork. She will be pretty special for us.”
And then there is senior Mackenzie Barnes, who led the Falcons in scoring last year playing point guard.
“I think in girls basketball if you have a really good point guard and a big girl in the middle, you’ll be pretty decent,” Wiard said. “We’re pretty blessed because we are fortunate to have both.
“(Barnes) does the right things and gets in the right spots and she’s gotten a lot better.”
Then there’s junior Ryley Thompson, one of the top 3-point shooters in the valley. Seniors Karmeece Robinson and Sofia Calvo also return. Freshman Delanye Thompson, Ryley’s sister, is expected to see playing time off he bench.

2. COVINA
All eyes will be on sophomore Allison Ayala, who was fifth in the state in three-pointers made last year.
But teams will need to watch more than the Colts guard, who had 101 3-pointers. The Colts (19-9 last season) return every starter from last year, including Valle Vista League MVP and All-CIF selection Mariah Sierra, a junior, and point guard Diana Navarro. Hope Duenas returns at center.
Advertisement
Even with all of the returnees coach Nick Masi expects four freshman to make an immediate impact. Mariana Cruz is expected to start and Summer Montoya will be the first off the bench.

3. SOUTH HILLS
The Huskies lost a lot from a CIF-SS Division 3AA semifinal team that went to 23-7, including Tribune Player of the Year Brittany Wang and coach Tiffany Liang.
But South Hills returns seven seniors and three starters and have added coach Kevin Cormier, who led a successful girls program at La Salle.
Senior Alisa Books, junior Denise Wang, Brittany’s sister, and senior Bree Newton all return to the starting lineup.
“It was an easy transition because the whole thing is my style of running, so it wasn’t so hard,” Cormier said. “But they kind of were used to playing half court and not creating a whole lot of (defensive) pressure, to run the floor and to run fast like I’ve always done.”
Four sophomores are expected to fit into the mix, including Camille Boone and Alexis Lujan.

4. WEST COVINA
Nine seniors, four who started from last year’s 19-9 team, return.
Guards Nicole Valdiviez and Kelly Truong and inside players Monea Lozano and Kerrissa McDavis all return. Senior Sharmaine Hartfield, the first player of the bench last year, also returns.
West Covina will add junior Andrea Bustillos, a transfer from South Hills, in midseason. Katrina Ponce de Leon is up from the JV team.
The only question is at center.
“We’re not the same height as last year,” coach Stefanie Foster said.
There’s a lot to like about the Brahmas.

5. DIAMOND BAR
Junior guard Juliana Gamboa had a huge summer and is gathering recruiting interest. Junior Lauryn Del Campo, who was the leading scorer early last season, returns at full strength after tearing her knee last year. Destinee Garr and Kayla Rice will be four-year starters for the Brahmas (11-15 last year).
“It is one of the best teams at Diamond Bar in years,” coach Tony McCabe said. “We’re big, fast and experienced and we’ve been together.”
Rice and sophomore Jessica Barrera both grew two inches from last year and both are 6-2.
Serena Liang is a three-year player and Candace Black, a transfer from Diamond Ranch, will be eligible midseason.
“We have seven pretty solid,” McCabe said. “We’re deep, we’re balanced and we’re experienced.”

6. ROWLAND
The Raiders have a big three, Tianna Eaton and Faith and Farrah Castillo.
“They have hearts of champions,” coach Quentin Carr said. “But it is very hard to say how good we’re going to be.”
Eaton, a junior, can play any position. Faith Castillo, a sophomore, is back at point guard and Farrah Castillo, a guard, is expecting big things, Chloe Nakamoto, Rachel Capinia and Nicole Woo also return.

7. SAN DIMAS
The Saints return six seniors and are expecting big things.
“They talk, practice and look like seniors,” coach Gary Jackson said. “They’re picking up things even more, they’re comfortable and we can send more at them and they can digest more things.”
Senior Aissa Buenaventura returns at point guard and post player Deja Johns is a four-year starter. Senior Dymond Mitchell is back from a torn ACL and freshman Kyla Cormier gives the Saints (10-20 last year) three big players in the middle.

8. BONITA
Once a point guard, always a point guard does not apply at Bonita.
Coach Darren Baumunk is moving last year’s point guard, junior Alyssa Ono, to off guard and taking fellow returner, senior Taylor Riggs, and putting her at the point.
“It will be much better to the ball in the senior’s hands and we can let the junior create some things,” Baumunk said.
But it will be the inside play that is the key for the Bearcats (14-14 last year). Center Jenna Gonzales returns and will be joined by newcomers Briyanna Coleman, a junior, and Kasie Herring, a sophomore.

9. WALNUT
The Mustangs lost a lot, including eight seniors from a team that went 16-9 and reached the second round of the CIF-SS Division 2AA playoffs.
“We’re very young,” coach Lori Huckler said. “But we have some pretty good kids.”
Walnut returns only one senior, Amber Wong, who was the first player off the bench last year. Junior guards Chloe Hsu and Jenna Pitpit will make a big impact. So will 5-11 freshman Theresa Lin.

10. SOUTH EL MONTE
Kimberly Urbina returns for her senior season after averaging 23.2 points last year, which was ninth-best in the CIF-SS and 29th best in the state. The 5-6 guard did it in her first year varsity playing varsity and the Eagles went 21-7.
“She makes us go,” first-year coach Rene Herrera said. “We expect a lot of box-and-ones but I think with our offense is run, it’s freelance, everyone is an option and a threat.”
Robyn and Cheyanne Quintana and Jennifer Jimenez return; the Eagles have only eight players on the varsity team.