I don't care what St. John Bosco's done, I like Bishop Amat's chances next week. They can match anyone score for score. It's on.

This simple Tweet went viral late Friday with a lot of folks thinking I lost my mind for thinking Amat could be on the same field with St. John Bosco. I stand by what I wrote, that I like their chances, and what I mean by that is I like their chances for a mammoth upset. But am I ready to predict it? No. Nobody in their right mind would pick Amat if you were asked to bet the mortgage on it. But I don’t think it’s impossible and I do believe it will be a winnable game in the fourth quarter. I was wavering on Charter Oak and Glendora before finally settling on Charter Oak. I watched the first game and Charter Oak handled Glendora up front. That’s going to be the difference again. But it will be closer than 28-7 the second time around. I love San Dimas’ chances against Viewpoint after watching how close Covina came to beating them. I picked San Dimas to upset Paraclete and get to the finals and not changing my mind now. I also like Sierra Canyon to beat Pomona in a not-so-close game. In other out of area games, take St. Francis in an upset over No. 1 La Serna and go with La Mirada to reach the finals over Cathedral. I also have La Habra all day over Villa Park. 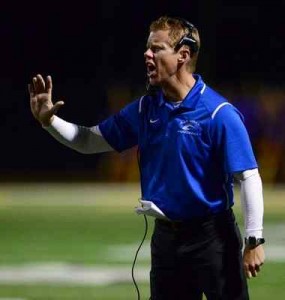 HOLMAN DELIVERING IN FIRST SEASON: Raise your hand if you picked the San Dimas High School football team to reach the semifinals or beyond of the Mid-Valley Division playoffs.
Besides Saints fans, very few football fans around the Valley had San Dimas surviving its second-round trip to No. 2 seed Paraclete. But that’s exactly what happened.San Dimas scored arguably the most impressive victory of any Valley team last Friday when it toppled Paraclete, 43-28, at Antelope Valley College.
“My guys, they wanted Paraclete,” first-year San Dimas head coach Mark Holman said. “We were just really focused. We’ve been getting better every week since the Northview loss. We are built for this kind of football.”Now, the path is clear for San Dimas to reach the championship game. Despite being on the road in Friday’s semifinals, San Dimas (9-3) is favored by most to beat Viewpoint (7-5).