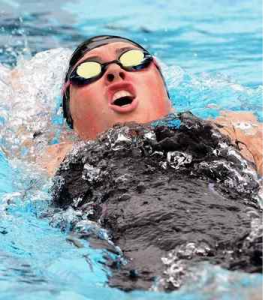 GIRLS SWIMMER OF THE YEAR: Alexis Margett, Glendora
There was no pressure to win CIF Southern Section swimming championships,No, the pressure came another way: Timing.
Alexis Margett’s Glendora High School succeeded on both counts. She got the victories and she got the times. The junior set a meet record in a 100 butterfly preliminary heat race and then won the main event a day later. The big victory, though, came in the 200 individual medley. She broke the two-minute barrier for the first time. It earned her San Gabriel Valley Tribune swimmer of the year honors.“That was what I was really ecstatic about,” she said.
It was her first victory in probably the most difficult race because of its four stroke discipline. She finished the event in one minute, 59.79 seconds. It was a personal best by two seconds and she won the event by a whopping 2.09 seconds.
The time was the second-fastest of all swimmers in the four divisions at the three-day finals. Only Edison’s Nora Deleske went faster, going 1:59.39 in a Division 1 victory.
“I kept telling myself that that was what I was training for all season,” she said. “For this. All that work paid off.”
A shoulder injury had kept her from getting a victory in any event in her sophomore season. She was third in the 100 fly.
She set the fly meet record in the preliminary races, going 52.59; eclipsing the time of 53.03, set by Yumi So of Crescenta Valley in 2009. She then won the main event in a slightly slower time of 52.73. It was still 0.99 seconds faster than her nearest competitor. It was the fastest time among all divisions.
“Last year with that shoulder injury, I could not full train like I should,” she recalled. “So getting two CIF titles this year is unbelievable.”
Only she said her coaches expected that.
“From what my coaches were telling me, they pretty much expected me to do it,” she said. “They said if I did not do it, I did not know what I was doing.”
She won the division’s 100 fly title her freshman year in 54.52.
She also helped the 200 freestyle relay team to a second-place finish and the 200 medley relay team to a fourth-place finish. The Tartans finished second in team points.
Margett then became the first Glendora athlete to win a CIF State swimming title. She won the 100 fly in 52.77 in Clovis. She took second in the 200 IM in 1:59.78. Isleta Chloe of Presentation won in 1:59.27.
“I really had fun racing people in these heats,” she said. “Everyone is such competitive swimmers.”

COACH OF THE YEAR: JANET POLLARD, GLENDORA
The Glendora High School girls swim team nearly won its third CIF Southern Section championship.
The Tartans were just a few places here and there from pulling off their first title since 2014. They finished in second place, 13 points behind Irvine’s Crean Lutheran in the Division 2 finals at the Riverside Aquatics Complex. As a result, Janet Pollard was named San Gabriel Valley Tribune coach of the year,
How close is 13 points? An individual victory is worth 22 points, scoring second is 19 and the remaining places are in increments of one point. In the three relay events, those numbers are doubled. A sixth-place finish and a Crean shutout in individual events or a 12th-place finish and Crean shutout in the relays would have placed Glendora ahead of Crean.
“I’m proud of them,” Pollard said. “I would have liked to win it and we obviously gave all we had. I’m happy with how we did.”
Crean defeated second-place Glendora by 23½ points last year.
The Tartans’ Alexis Margett swam to victories in the 100 butterfly and 200 individual medley. The Tartans had one second-place finish, three thirds, seven others in the championship finals and three in the consolation finals.