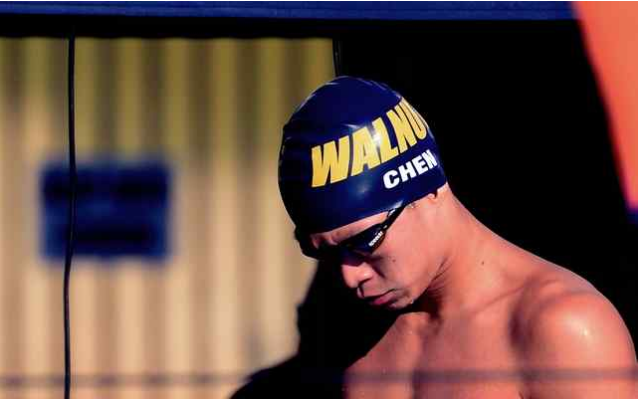 BOYS SWIMMER OF THE YEAR: Jerry Chen, Walnut
For Walnut High School, winning a CIF Southern Section swimming championship meant that Jerry Chen, one of the Mustangs’ top swimmers, needed a Herculean effort.
Chen delivered. He won a Division 3 title in the 100 backstroke. He took second in the 200 individual medley. The Mustangs eked out their first title in 24 years, edging Gabrielino by 10 points, a small margin of victory in CIF-SS swimming. It earned Chen San Gabriel Valley Tribune Swimmer of the Year honors.
“After four years in CIF, this was a great way to win it; me and my teammates were able to close it out,” he said.
Chen had his fastest 100 back time of the final meet in the prelims, going 50.21. He was slightly slower in the finals (50.46), but still got the victory.
“It was rough,” he said of the race. “I knew I had the lead and dug in to finish strong.”
He went back-and-forth with Javier Bernal of Riverside’s J.W. North in the 200 IM. Bernal had the faster time going into the meet, but Chen was faster in the prelims by 0.20 seconds. Bernal won the race in 1:51.45 with Chen second in 1:52.97. They were the lone swimmers faster than 1:55.
Chen helped the Mustangs win the 200 medley relay, swimming the opening leg. He also helped Walnut to a second-place finish in the 400 freestyle relay, swimming the anchor leg.
In the CIF State meet in Clovis, he was seventh in the 100 back in 50.62. He was 14th in the 200 IM in 1:53.12.

COACH OF THE YEAR: Damon Pitre, Damien
Depth among swim teams can sometimes be overrated.
Damien High School proved that in the CIF Southern Section Division 2 finals at the Riverside Aquatics Center. The Spartans needed only eight swimmers to win the title.
Damien claimed its first CIF-SS crown since 2001 and defeated second-place and fellow Baseline League competitor Los Osos by 117 points. Damon Pitre earned San Gabriel Valley Tribune Coach of the Year honors.
“We were fortunate to have two water polo kids come back to us and they’re studs,” Pitre said. “It was what we really needed.”
That would be starters Chase Travisano and Matt Maier, although Mac Quinn and Ryan Terlip were also on the team. The Spartans had four swimmers, Preston Planells, Quinn, Richie Campbell and Travisano, in four events at the meet, Maier was in three events and Cody Liske in two. Grant Farias and Terlip only swam in one relay race each. The Spartans had only two club swimmers on their team.
“That was huge,” Pitre said. “We just had to make sure we do what we needed to do. Going into the meet I had us up. But I did not know it would be that big.”
Planells, Quinn, Farias and Campbell set a school record in the winning the 200 medley relay (1:34.63). Travisano, Maier, Planells and Campbell swam the second-fastest 400 free relay time in school history (3:07.31) for a victory. Those were Damien’s lone wins in the meet.
“Massive,” Pitre said. “Massive.”
Campbell was second in the 50 free and fifth in the 100 free. Travisano was fourth in both the 100 and 200 frees. Quinn was third in the 100 breaststroke. The only event the Spartans did not score points was the 100 butterfly. Damien competed in the CIF State meet in Clovis.