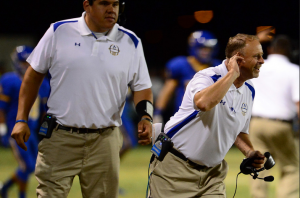 Both the Bishop Amat and Charter Oak football teams have plenty of production to replace from last season and it showed last weekend as both toiled at the prestigious Battle of the Beach tournament at Edison High in Huntington Beach.
Amat, which has to replace its leading passer, rusher and top two receivers, won one game and didn’t make the consolation bracket. Charter Oak did slightly better, making the consolation tournament before calling it a day.
Mater Dei won the event by beating Corona Centennial in the championship game. The Monarchs visit Amat in the season opener on Aug. 26.
— Aram Tolegian