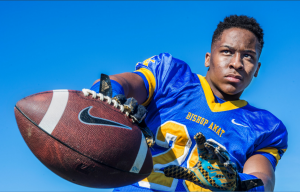 By Aram Tolegian
Former Bishop Amat High School running back, and 2015 Tribune Player of the Year Torreahno Sweet made official his college destination over the weekend.
Sweet will play this fall at Western Oregon, where he’s expected to compete for a starting job. Sweet will also play baseball.
“They had that D-1 feeling,” said Sweet, who was also considering Concord University. “And the campus, it was just beautiful. It was hard not to like it. I met a bunch of teachers. It’s a 100-percent scholarship. Everything’s paid for, so that’s great. Free education.”
Sweet rushed for 1,808 yards and 34 touchdown last season at Amat. Many thought he was surefire Division 1 recruit, but that never materialized. Landing a player like Sweet has Western Oregon feeling like it got a steal.
“We’re very excited, players like him don’t come along very often,” Western Oregon offensive coordinator Brian Harris said. “We don’t recruit the L.A. area a whole lot, so just to come across him and have everything work out, it’s kinda like it was meant to be.
“There’s no question, we believe he has Division 1 talent. We play against FCS schools and there’s no question he belongs on the field with those caliber of players. We have some other players like that and we get fortunate enough once in a while to get them. He’s definitely going to make an impact on our team.”
Sweet will leave for Western Oregon on Aug. 9 and will arrive in time for the start of fall practice. Western Oregon opens the season on Sept. 3 against Sacramento St. Local fans will get a chance to see Sweet in action when the Wolves play Azusa Pacific at Citrus College on Nov. 5.
“I’m ready to go,” Sweet said. “I’ve been working out already. I’ve had their playbook. I’m in shape, I keep myself ready.”

MALDONADO BACK AT BISHOP AMAT
Standout defensive tackle Aaron Maldonado is back at Bishop Amat and practicing with the team after leaving the school at the end of the school year for undisclosed reasons.
Maldonado, who already has an offer from BYU, is arguably the Lancers’ top returning player. The 6-foot-3, 300-pounder, had 28 tackles and two sacks in 2015.

Mater Dei could be ranked No. 1 in California when they open at Bishop Amat. What chance do you give the Lancers?