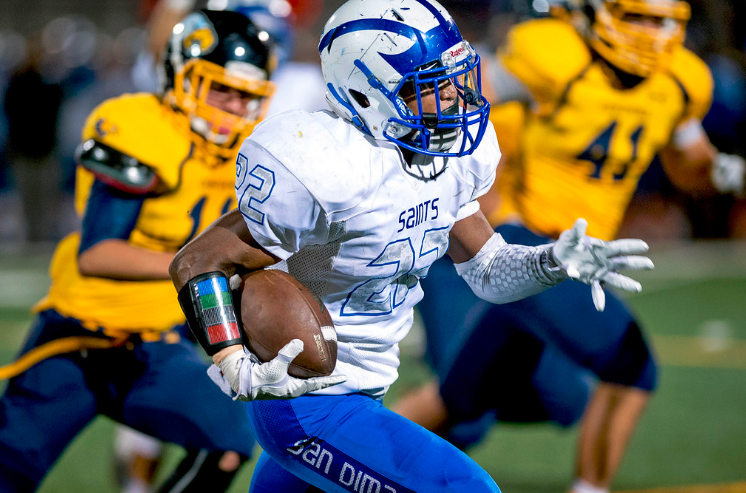 Jarell Sykes rushed for 141 yards and three touchdowns and San Dimas closed the nonleague portion of its schedule with a 41-14 victory over host California.
Joey Tamayo also threw for 81 yards and two scores for the Saints, who improved to 5-0. Christopher Lowden rushed for 114 yards and Andrew Reyes had 87 and two touchdowns for the Condors, who slipped to 3-2.
San Dimas outgained Cal, 278-62 during the second half to finish with an advantage of 404-273.
San Dimas, which was held without a first down on its first two possessions, took control of the game during the middle of the second quarter and scored on five consecutive possessions to lead, 35-14, by the first play of the fourth quarter.
The Saints started the third quarter with scoring drives of 65, 55 and 40 yards to go up, 35-14, on a 20-yard run by Sykes with 11:52 to play.
San Dimas also got an 8-yard run from Sykes at 7:44 and a 30-yard pass from Tamayo to Daniel Jackson at 5:08 for a 28-14 lead in the third quarter.
San Dimas coach Mark Holman: “Cal High was really physical (in the first half). I knew they would be physical and I put a challenge on my kids and said, ‘Hey, we came down for a road trip, we expected it to be physical and our mission to (open the second half) with a drive.’ And we did.”
— Stephen Ramirez
EL MONTE 37, MARSHALL 19
PASADENA — El Monte High School football coach Eric MacIntyre said he had a feeling his team would start slow against Marshall.
He proved to be right when his team trailed, 13-3, in the second quarter. But the Lions came roaring back, scoring 34 unanswered points in a 37-19 win in Mission Valley League play on Thursday night at Pasadena High.
El Monte took a 17-13 lead it never relinquished early in the third quarter when quarterback Andrew Ramos scored on a 2-yard touchdown run. The Lions made is 24-13 a few minutes later when Kevin Molina picked up a fumble and ran it 36 yards for a touchdown.
Romero iced the game in the fourth quarter when he scored his second and third touchdowns. The first was a 16-yard run. The second was a 22-yard run.
El Monte coach Eric MacIntyre: “It wasn’t pretty. We made a lot of mistakes. We came out flat early and had a bad week of practice.”