Northview is feeling it and it should. Great win boys pic.twitter.com/EPBIRLW3Pq 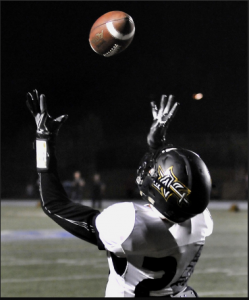 Northview’s big second half beats San Dimas: The road to the Valle Vista League football title once again runs through Northview High School.
Steven Comstock accounted for 385 yards and five touchdowns and the Vikings’ defense shutdown San Dimas in the second half to secure a 49-34 victory over the host Saints on Friday.

Los Altos ready for Charter Oak: Moments after Los Altos secured its 39-7 victory over Chino and found out that Charter Oak won as well to set up next week’s battle of unbeatens and likely for the Hacienda League title, Los Altos coach Dale Ziola could not contain his excitement between two 8-0 teams that are also 3-0 in league.
“Sweet,” exclaimed the visibly pumped coach. “It’s what it’s all about It’s just like the good old days. That’s awesome, It’s going to be a great week and it’s going to be a good game. We got a lot of respect for Charter Oak. It’s 1-1 (between) us the last two years since they recreated the Hacienda League, so it should be fun.”

Duarte looking good in Montview: First-place Duarte scored on its first play from scrimmage and never trailed in 49-10 win over Sierra Vista in a Montview League game on Friday night.
The win gives the Falcons (6-2, 3-0) a one-game lead over Nogales and Azusa with two games to play. The Falcons will visit Nogales next week in a game that will decide the order for the Montview League playoff spots.

Charter Oak not happy with sloppy win: In Hacienda League play, a solid defensive performance by Charter Oak helps it stay undefeated with a 20-6 win after a sloppy game at Diamond Ranch on Friday night.
The Panthers (3-5, 0-3) struggled for the second straight week to put up points before the fourth quarter. With 5:30 left in the game, Trey Green got in the end zone by hurdling a Chargers defender at the 2-yard line after a 25-yard pass from Justin Tong to cut the lead to eight.