Los Altos gets defensive in 21-7 win: Anyone thinking that the Los Altos High School football is a one-man show got a rude awakening on Friday night.
With star running back Tyler Nevens bottled up for most of the night, the Conquerors turned to other methods to post a 21-7 win over host Charter Oak and clinch at least a share of the Hacienda League championship.
“Football is a team game, and it takes us all,” Los Altos head coach Dale Ziola said. “Tyler is special. He’s awesome. But everyone’s trying to stop him and we’ve got to have an answer and the kids have been responding.”

Nogales closing in on league title: Nogales overcame an early 14-point deficit to score 28 unanswered points on its way to beating Duarte in a pivotal Montview League game, 28-14.
Nogales, the second-ranked team in the CIF-SS Division 13 poll, didn’t do itself any favors after losing to Azusa in the league opener.

Glendora comes up short: Ayala tackled Glendora quarterback Bryce Wooldridge at the 2-yard line as time expired to win its first league championship since 2008 by a score of 26-21 Friday night at Ayala.For a defense that had only given up six points in league, it was only fitting that it was the unit on the field to secure the Palomares League title in head coach A.J. Garcia’s first season at the helm.

Damien hangs tough in loss: The Damien Spartans were able to do something few teams have done this season — stay close to the explosive Rancho Cucamonga Cougars.
But that can turn on a dime and it did, as the Cougars used a late second-quarter surge and went on to a 44-24 win that secured the Cougars a share of the Baseline League title Friday night at Cougar Stadium.

Bishop Amat boots home OT win: Extra-point tries are usually one of the more mundane parts of a football game but the last extra point of the night for the Bishop Amat High School football team was the biggest of the team’s season.
Kicker Shazel Sakr nailed the ball through the uprights to give the Lancers a thrilling 41-40 overtime win over Chaminade in Mission League action on Friday night. 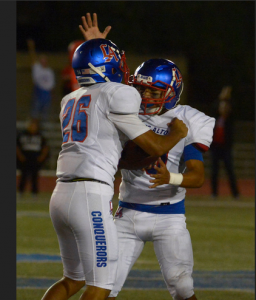 Friday’s results
Baseline League
Rancho Cucamonga 44, Damien 24 — Great result despite loss against one of the best teams in SoCal.
Hacienda League
Los Altos 21, Charter Oak 7 — At the end of the night, chalk this up to a ferocious Conquerors defense.
West Covina 28, Chino 12 — Bulldogs can share league title with a win over Los Altos in finale.
Diamond Ranch 35, Walnut 7 — Sadly, only automatic W in Hacienda is against Walnut.
Miramonte League
Garey 35, Ganesha 0 — Thought Giants would put up more fight than this.
Mission League
Bishop Amat 41, Chaminade 40, OT — Went 7-3 and should have gone 8-2 and beat Loyola. Regardless, they proved a lot of doubters wrong, including me.
Mission Valley League
El Monte 30, Rosemead 27, OT — The battle for third best in the MVL goes to the Lions.
Mountain View 40, Gabrielino 0 — Final score is surprising, thought Eagles would be better.
South El Monte 28, Marshall 8 — Only blemish is the Arroyo loss.
Montview League
Nogales 28, Duarte 14 — Massive win for the Nobles, who go to first thanks to Sierra Vista’s win over Azusa.
Workman 28, Gladstone 6 — Lobos much improved.
Sierra Vista 20, Azusa 19 — Aztecs got win it needed from Nogales, then fell to Sierra Vista.
Palomares League
Claremont 55, Diamond Bar 41 — Lot of offense for two teams going nowhere.
Ayala 26, Glendora 21 — Tartans had chance in final minute, couldn’t pull it out.
South Hills 49, Bonita 17 — Huskies could be a real threat in Division 7 if it gets in.
Valle Vista League
Northview 62, Wilson 0 — About what you expected.
Balddin Park 28, San Dimas 23 — The absolute shocker of the season, give Baldwin Park all the props. Who saw it coming? Nobody.