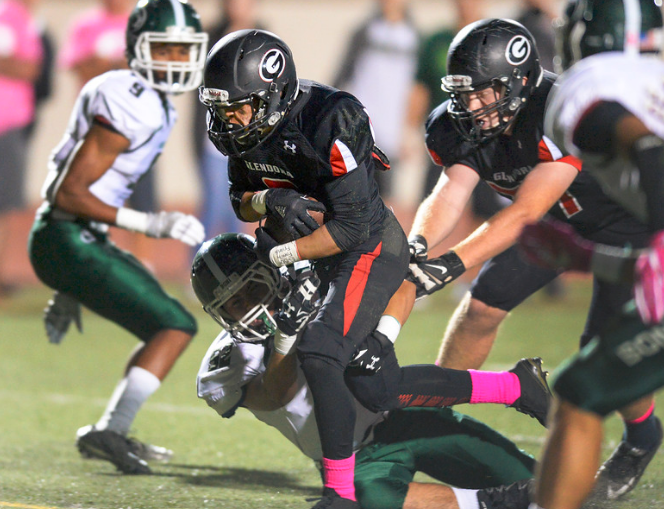 Glendora’s James Nolan (3) runs for a touchdown as they play Bonita in their Palomares League game at Citrus College in Glendora on Thursday October 20, 2016. (Photo by Keith Durflinger/San Gabriel Valley Tribune/SCNG)

GLENDORA 56, BONITA 20
GLENDORA — Bonita High School has shown the ability the past few seasons that when it’s backed into a corner, it can attack like a cat and live for another day.
This time, the Bearcats just got mauled.
James Nolan rushed for 219 yards and three touchdowns and Bryce Wooldridge accounted for 273 yards and four scores as Glendora stayed perfect in the chase for the Palomares League football title with a 56-20 victory over Bonita at Citrus College.

Wooldridge threw for 199 yards for the Tartans (4-4, 3-0). Dylan Flores had 87 yards receiving and a touchdown for Bonita (3-5, 0-3). The Bearcats’ playoff hopes have gone from slim to almost nil.
Glendora plays at Ayala next week. The Bulldogs (3-4, 2-0) have a home game against Claremont on Friday.
Glendora started fast and finished the first half strong to lead, 35-20, after two quarters.
James Nolan rushed for 125 yards and two touchdowns during the first half as the Tartans scored on five of their eight possessions to start the game. Glendora gained 320 yards during the first two quarters.
Glendora’s James Nolan: It’s just another win for us. We just have to keep battling, winning games and hopefully winning league.”
Bonita coach Ibis Aguilar: “We showed fight tonight. We got down 21 points in the first quarter. We fought back, had a great effort, had execution and had everything going in our direction. We just weren’t able to sustain it.”
— Stephen Ramirez
NOGALES 58, WORKMAN 0
LA PUENTE — Nogales High School dominated the lines of scrimmage and cruised to a 58-0 win over Workman in a game played at La Puente High on Thursday night.
The Nobles (7-1, 2-1) took over sole possession of second place in the Montview League football standings, half game behind first-place Duarte.
Quarterback Matt Olguin led the Nobles offense, completing 14 of 16 passes for 197 yards and five touchdowns, all in the first half.
Olguin threw three touchdown passes to James Gray and a pair to Larenzo Williams. Andrew Carrazco ran for another TD in the first half.
Williams intercepted a pass in the second half and returned it 60 yards for a score. It was his third interception of the season.
The Nobles offensive line of Chris Espinoza, Christian Flores, Leo Gonzalez and brothers Jonathon and Juan Guardado gave Olguin time to throw and opened holes for Gray and Carrazco to pile up 297 yards of offense in the first half while holding the Lobos (3-5, 1-2) to just 40 yards of offense.
Nogales coach Richard Salazar: “We just focused on making our blocks on offense. Williams and Gray are our top guys and are making the plays we expect of them.”
Nogales’ Matt Olguin: “Our offensive line did most of the work. They allowed us to open up our offense. All my love goes to my offensive line. Without them all these scores wouldn’t be possible.”
Nogales’ Larenzo Williams: “Matt took his time and threw the ball perfectly. On that pick I just wanted to help the defense. I could read the guards and tackles and knew it was a pass and it came to my side.”
— John Honell

It’s league showdown time for many teams in quests for championships as the regular season wind down. Four Top 10 teams face that scenario.
Los Altos makes its first appearance in the Top 10. 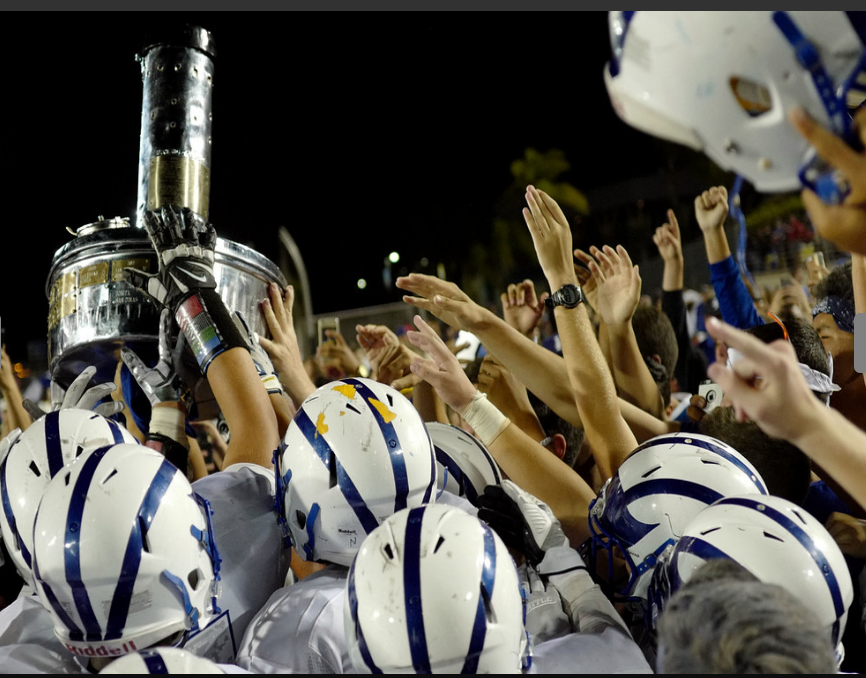