I periscoped the final mintue with Los Altos trailing 28-24. Watch the dramatic finish with Khayman King hauling in the game-winning 19 yard TD pass from Kody Olmos with no time left for a 30-28 Los Altos win. 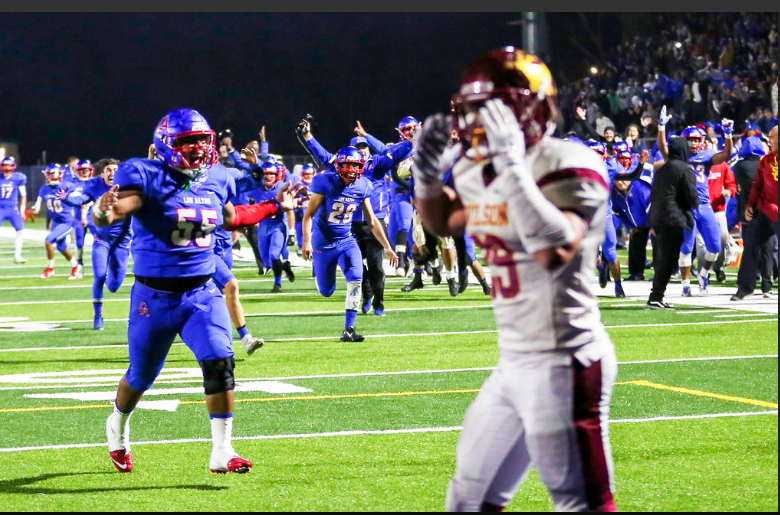 Los Altos wins on final play of the game: Los Altos and Long Beach Wilson went toe-to-toe and back-and-forth for every second of their CIF Southern Section Division 6 semifinal game Friday night, with the right to play for the championship next week at stake.
In the end, it was Los Altos that made one more big play. And what a play it was.Khayman King pulled in an 18-yard touchdown pass from Kody Olmos as time expired for a dramatic 30-28 Conqerors’ win, saving their undefeated season and putting them in the division final for the second time in three seasons.

Arroyo rolls into Division 12 finals: It didn’t take long for Arroyo High’s offense to get it going in the CIF-SS Division 12 semifinal game on Friday night.
Once it did, the Knights did not let up.Arroyo sophomore quarterback Ernesto Camacho threw six TDs and 421 yard en route to a 70-21 blowout home victory over visiting Segerstorm.

Charter Oak can’t keep up in fourth: In the end, the Charter Oak High School football team had nothing left to give.
Besieged all season by injuries to key players, the patchwork Chargers gave undefeated Sierra Canyon all it could handle for 3 1/2 quarters. But ultimately, the Chargers gave out in a 42-19 loss in the semifinals of the CIF Southern Section Division 4 playoffs.
“It comes down to a lot of breaks and we didn’t get any, except broken bones,” Charter Oak head coach Lou Farrar said. “Nobody ever thought that after all the things we went through, that we would end up here in the semifinals.”

South El Monte’ D-13 bid comes up short: Big plays early in the game and big plays later in the game helped Rancho Christian High earn its way to the CIF-SS Division 13 championship game next week with a 42-28 win over South El Monte on Friday night.
Four of Rancho Christian’s six touchdowns were on plays of 30 yards or more. The other two touchdowns were aided by plays of 30 or more yards on each of the two drives.