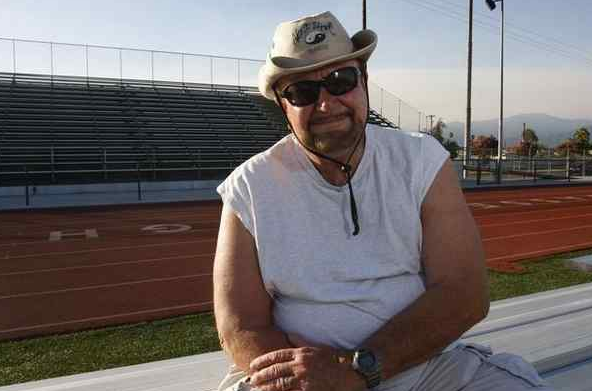 Tony Zane in 2009 while coaching at Bassett High School in August 26, 2009. (SGVN/Correspondent photo by William Hallstrom/SGCITY)

Legendary Baldwin Park football coach Tony Zane, who led the Braves to two CIF championships in 1980 and ’91, and 16 league championships, passed away Friday.
Zane, who coach controversial Lawrence Phillips in the early 90s and last coached at Baldwin Park in 2002, was at Baldwin Park for 31 years.
Zane, known for his offensive mind, coached Michael Johnson (1984) and Marc Ruiz (1991) to division player of the year honors.
Zane returned a few years back to be an assistant at Bassett, and during that time former South Hills and Maranatha coach Steve Bogan explained what an offensive genius he was.
“Tony would always find your toad (weakest player in the defense) and exploit it.”
We’ll have more on Zane tomorrow.

Great man, coach, mentor and friend! We can all only hope to touch as many lives as he!!!! Once a BRAVE always a BRAVE!! https://t.co/07vaWM1LW9

One of the true coaching icons of the San Gabriel Valley. A great coach – but an even greater man! Thanks for everything coach! #RIP https://t.co/YLUCR39fiC

@SGVNSports he was always accommodating and receptive when @CalHiSports covered Lawrence Phillips. Sorry to hear that. #RIP #HSFB

Pleasure to have met the man. SGV football lost a giant today in Tony Zane. May he RIP. https://t.co/ghZ30u09h6 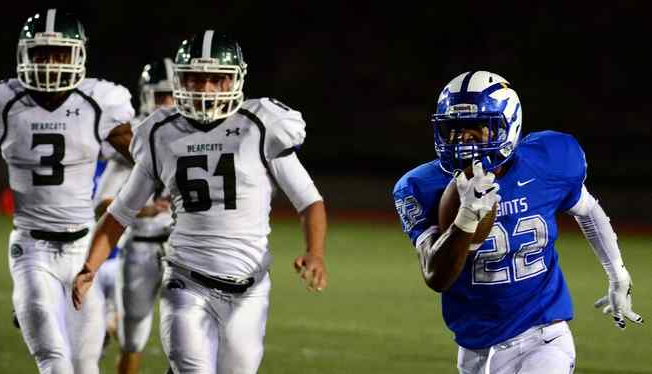 Above: San Dimas’ Jarrell Sykes will take part in Friday’ game
By Aram Tolegian
Montebello High School football coach Pete Gonzalez has coached in his fair share of all-star games and he’s never seen anything like the camaraderie the West team has as it readies for the San Gabriel Valley All-Star Senior game Friday at West Covina High. But will it all add up to a win for the West, or will an East team that’s itching to get some pride back for it’s neck of the woods after losing two straight in the series remind everyone who has historically been the boss in the series. Kickoff is 7 p.m.
“I’m most impressed that they’ve all shown up,” Gonzalez said referring to having had full participation in practice. “I really appreciate the fact that they’ve put their time in. I know we’re up for a big challenge, but I’m really impressed with our commitment to the game.
“They understand that pride is at stake and they are representing their schools, their communities, their coaches, their families. We’re going to play to win. It’s been a great group of guys. No problems. They’re really supportive of each other. This is the fourth all-star game I’ve done the last eight years and these kids got along the best.” 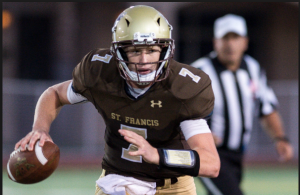 The West offense should be dangerous by land or air on Friday. La Salle running back, the Pasadena Star-News Player of the Year, is the headliner while Star-News Offensive Player of the Year Michael Bonds figures to get the lions share of the quarterback duties. When Bonds drops back to pass he will likely be looking for Arcadia Raeshawn Roland, who is one of the top receivers around.
Whether Bonds will have much time or Milliner much room is the big question because the East defensive line is no joke. The Los Altos tandem of Jayson Jones (nose guard) and defensive end Andrew Manuele headline a unit that has shined in practice.
On offense, the East is led by a dangerous group of running backs led by San Dimas’ Jarrell Sykes, Northview’s Kevin Thomas and La Serna’s Matthew Marshall. It’s looking quite obvious that on either side of the ball, the East is looking to bully the West with its physical nature.
“Our running backs are a good bunch of running backs,” East head coach Eric Martinez (Diamond Ranch) said. “Our defensive line is pretty good. Those are our strengths.”
Although it’s an all-star game, Martinez said he and his staff have been driving home that the goal is to win on Friday. The East has lost the last two installments after establishing a seven-game win streak prior to the 2015 game. The East still comfortably leads the all-time series 23-13-2.
“I would love to go out with a win because, obviously, my last game, we lost,” Martinez said. “And the fact we haven’t won the last two years, that’s a big incentive. I’ve told them they’ve owned the last two years and we’ve got to bring it back, so they’re pretty pumped. They just want to change it up now.”
The West, however, seems bent on adding to its budding streak.
“We’ve really emphasized what we’re playing for and who,” Gonzalez said. “They understand it.”

Notebook from last week: After losing the past two installments of the East-West SGV All-Star Game, the East team is bent on getting back on the winning side of a ledger it dominated for so long. And a major weapon may help them do just that.It’s still unofficial, but East coach Eric Martinez of Diamond Ranch is hoping to secure the services of Oregon-bound Rancho Cucamonga running back Jaylon Redd, who told Martinez he’d like to play and will be on the East’s first roster. 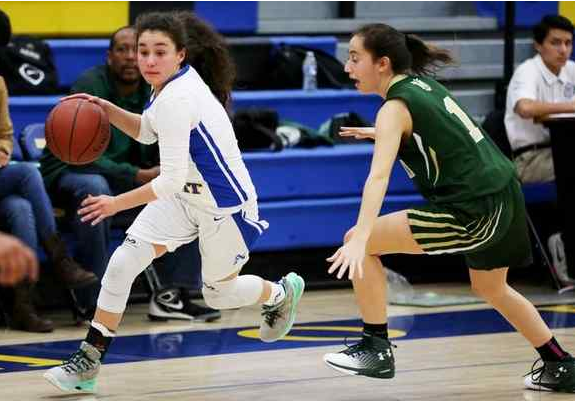 Girls Basketball
Bishop Amat falls to St. Monica – The Bishop Amat High School girls basketball team may have been undersized and undermanned against the Camino Real League’s first place team — St. Monica. But what the Lancers lacked in height and depth, they made up for in heart and determination. However, St. Monica fended off Bishop Amat’s valiant effort and late fourth quarter rally to win 54-50 on Thursday night in La Puente.
“We were overmatched,” said Bishop Amat head coach Fernando Duran. “But our middle name is overachieve. That’s our culture—over-achieve.”

Boys basketball
Rowland 57, Wilson 43 — Ethan Sims had 24 points and Jeffrey Von had 11 points for the Wildcats in a Valle Vista League loss Wednesday.

Girls basketball
Rowland 79, Wilson 40 — Parvene Barimani had 13 points and Calley Wu had 14 rebounds and nine points for the Wildcats in a Valle Vista League loss Wednesday. 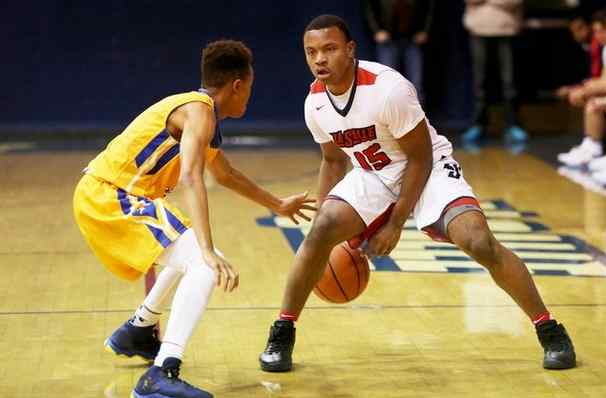 Boys basketball
Bishop Amat loses big game at La Salle: With the top of the Del Rey League standings as tight as can be, both the Bishop Amat and La Salle high school boys basketball teams knew there was no margin for error on Wednesday night.
Both teams played like it.
La Salle (13-8, 4-1) however, was able to use its decided size advantage to scratch out a 53-47 win and keep pace with St. Anthony atop the league standings.“We had some games that we played early on, a brutal preseason, so the guys are battle-tested now,” La Salle coach Mike Lynch said. “We’re able to win these types of games now.”

Girls basketball
Los Altos fends off West Covina: Los Altos got a big defensive play at the end of the game and held on for a 53-50 win over West Covina on Wednesday night.Senior Kaylee Shozuya blocked what could have been a game-tying 3-point shot with 12 seconds left and the Conquerors escaped with their 14th consecutive win.
The Conquerors (18-2, 5-0), Southern California News Group’s second-ranked girls basketball team finished the first half of Hacienda League play undefeated and remain a game ahead of Walnut.
“Kaylee’s length helps her,” Conquerors coach Marc Nakamura said. “West Covina is always a tough fight for us. That block was one of the few spots we got a stop when we needed it.”
Duarte 65, Gladstone 43 — Ryley Thompson had 18 points and Patricia Morris had 16 points, 12 rebounds and five blocks for the Falcons (19-4, 5-0) in a Montview League win.
Rowland 79, Wilson 40 — Tianna Eaton had 31 points and seven rebounds, Kaylin Ngo had 13 points and Faith Castillo had 12 points for the Raiders (19-1, 5-0) in a Valle Vista League victory.

Girls soccer
South Hills 1, Claremont 0 — Madison Warren scored a goal with an assist from Isabella Valderrama for the Huskies (9-7-1, 4-1) in a Palomares League win. Goalie Viviana Poll had a shutout.
San Gabriel Mission 5, Ramona Convent 0 — Juliana Lopez scored three goals and Melissa Estrada and Isabella Lopez each scored a goal for the Pioneers (10-3, 4-0) in a Horizon League match.
Gladstone 1, Duarte 0 — Kim Bernal scored a goal with an assist from Daniela Mendez for the Gladiators (6-5-1, 2-2) in a Montview League victory.
West Covina 2, Los Altos 2 — Serina Vargas scored twice and Lauren Sanchez and Gianeece Serrato each had an assist for the Bulldogs (8-2-8, 3-0-2) in a Hacienda League tie. 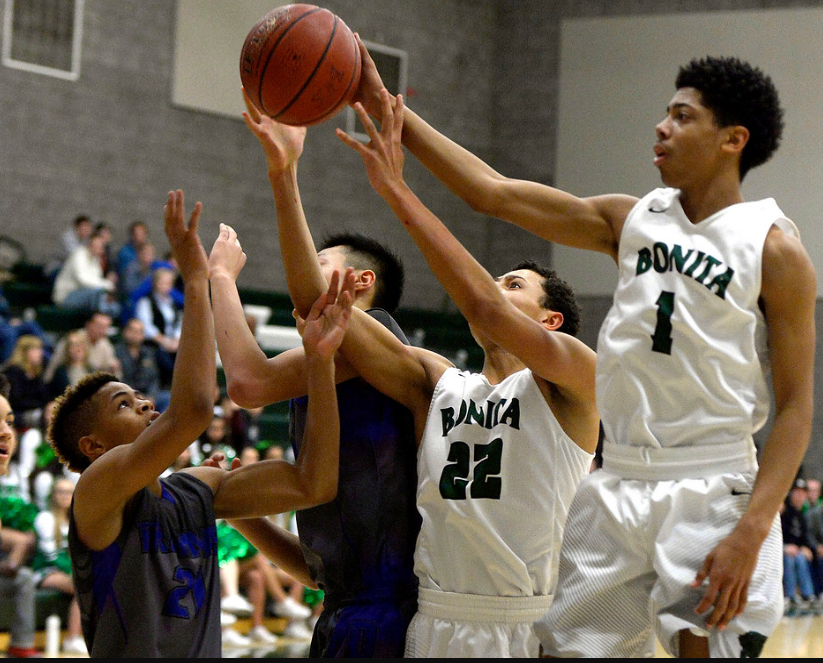 Boys basketball
Bonita holds off Diamond Bar: Bonita High School boys basketball star Joe Quintana has provided the spark that has lifted his team atop the Palomares League standings. But that spark started to flicker as the senior guard twisted his left ankle early in the first quarter in a key league showdown against Diamond Bar on Tuesday night.
However, Quintana wouldn’t be denied a chance to help his teammates. He rejoined them on the court and scored 25 points to lead the Bearcats to a 72-56 win over Diamond Bar at Bonita High.
“(Quintana) is pretty tough,” Bonita head coach Tim Godley said. “I’ve seen him play through some things that some others guys wouldn’t.”

Chino Hills wins 56th straight: The Chino Hills boys basketball team relies on its frentic pace to wear opponents down. Few can play at the pace the Huskies prefer, especially for four quarters.
Rancho Cucamonga fared well late in the first half but in the end it was Chino Hills still prevailing 122-74 in Baseline League play on Tuesday nightIt marked the 56th straight win for the Huskies (21-0, 5-0) who are chasing a state record of 66 straight wins by Compton (1987-1989).

Damien 73, Etiwanda 63 — Justin Hemsley had 22 points and 11 rebounds, Cam Shelton had 22 points, seven assists and nine rebounds and Elijah McCullough had 16 points for the visiting Spartans (21-2, 4-1) in a Baseline League victory.
South Hills 59, Ayala 50 — Jason Rodriguez had 33 points and Dalton Clevenger added 10 points and had five rebounds for the Huskies (10-12) in a Palomares League victory.

Girls soccer
Garey 2, La Puente 0 — Goalie April Keo recorded a shutout and Veronica Alvarez and Andrea Noguez each scored a goal for the Vikings (5-6-3, 3-1-1) in a Miramonte League game.