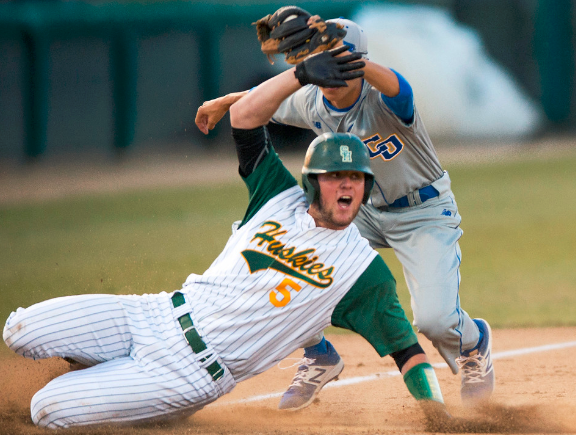 WALNUT >> There comes a time in an athlete’s career when the moment requires the player to either contribute to a winning effort, or get replaced in the lineup.For South Hills right fielder Carlos Camarena that moment came in the bottom of the seventh inning of Wednesday night’s nonleague game against Charter Oak at Mt. SAC.With the bases loaded and no one out, Huskies coach Darren Murphy talked to Camarena prior to his appearance at the plate.
Camarena proceeded to line a single to left field that scored Jacob Dominguez with the tying run in the Huskies’ eventual 3-2 victory. The Huskies (12-3) won the game when Jacob Amaya was hit by a Bret Clementson pitch. allowing Zach Bromstead to score the winning run.
Charter Oak starting pitcher Julian Rodriguez threw six solid innings, giving up one run and six hits.
The Chargers (8-3) scored the game’s first run in the fifth inning when Jacob Moreno hit a hard line drive to center field that scored Jason Adame. Landon Howell then laid a soft bunt down the third-base line that scored Ronnie Parham to increase the Chargers’ lead to 2-0.
South Hills scored its first run in the bottom of the sixth inning when Karlos Morales singled to right field to score Daniel Genna. The rally was stymied when Brandon Dieter grounded into a double play.
In a pregame ceremony, the teams honored the recently deceased Mike Moore, who was a key member of the Charter Oak Youth Baseball Association and was recently the booster club president for the South Hills baseball program.
A scholarship fund has been started in his name.
Longtime Charter Oak High coach and current South Hills assistant coach Tom Quinley was honored in a postgame ceremony. Quinley was at the City of Hope National Medical Center, undergoing surgery.
South Hills coach Darren Murphy: “I wanted to bring in a pinch hitter, but then I told him that it was his time to show us that he can produce in this spot. “You definitely didn’t want to go in a league game Friday with a loss. We haven’t won many games like this. We still had a bit of a jet-lag feeling from our trip to North Carolina, but our guys fought against a very good team.”
Charter Oak coach Elias Chavez: “Our team competed tonight. I think the first time that we played them, the lights were a little too bright for us. Tonight we competed. This is a great example when you compete for seven innings. “Rodriguez became a man tonight. He was dominant from the first pitch to the last. It was really hard to take him out (in the seventh inning), but I couldn’t ask for him to do anymore. He really kept us in this game.”
— James Escarcega