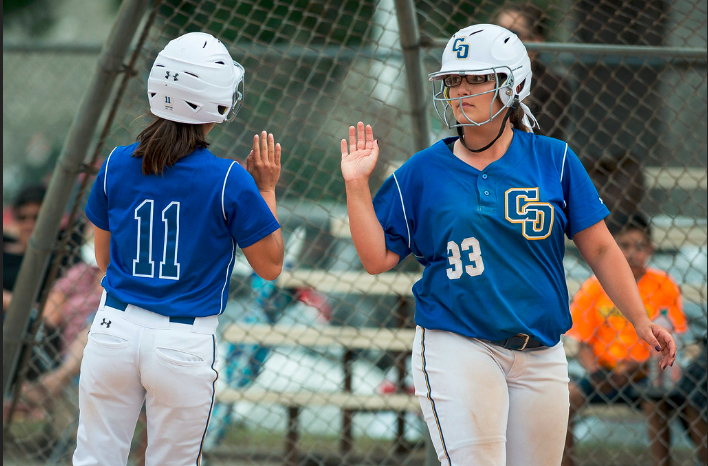 By John Honell
DUARTE >> The Charter Oak High School softball team continued its hot hitting, coming away with its third mercy rule win of the Northview Spring Break tournament in a 9-1 semifinal win over Covina in a game played at Duarte High on Thursday afternoon.The Chargers (12-1) will play the winner of the Duarte-Northview game Friday at Northview at 3 p.m.The Chargers jumped on top in the second inning, sending nine batters to the plate, scoring four runs on three hits and taking advantage of a pair of Colts errors.
They were never threatened as senior EmaRae Flores shutout the Colts (7-8) for four innings and gave up only one hit as she picked up her 12th win of the season.
“I try to keep the ball low and get ahead in the count,” Flores said. “I can always count on our defense and my infield makes the plays, so we can get back up to bat.”
Flores didn’t give up a hit until her rival in the circle, Bailey Griego, singled up the middle in the fourth inning.
Flores then hit Cheyenne DeBoynton with a pitch, but got out of the jam with a couple of ground outs.
“Charter Oak is a very good team,” Colts coach Joe Brown said. “Those errors didn’t help but, top to bottom, they swing the bat well, play great defense and their pitching is solid.”
The Chargers scored five more times in the third inning on the way to giving first-year coach Brittany Saucedo a win on her birthday.
“We work on all the little things,” Saucedo said. “I tell them that it’s the little things that count and when we play our game and do what we need to do, we’ll be successful. We try to keep pushing and be aggressive to force the other team to make mistakes.”
Catcher Jantzen Owen had a pair of singles and Xophia Venegas knocked in two runs to lead the Chargers attack.
The Colts only run came in the fifth inning when Andrea Apodoca singled and came home on a Griego’s second single of the game.
“(Griego) helped herself with the only RBI,” Brown said. “She’s been doing that all year, but we didn’t play well behind her. But it’s a spring break tournament and we’d rather be playing games than practicing. We’re just trying to get ready for (Valle Vista) League play.”
THURDAY’S SCORES
Semifinals
Charter Oak 9, Covina 1
Northview 10, Duarte 4
Consolation
Paloma Valley 8, Pioneer 1
Baldwin Park def. Gladstone
Friday’s schedule
At Northview HS
Championship
Charter Oak vs. Northview, 4:45 p.m.
Consolation
Paloma Valley vs. Baldwin Park, 2:30 p.m.
Pioneer vs. Gladstone, 2:30 p.m.
At Duarte HS
Third-place
Covina vs. Duarte, 2:30 p.m.