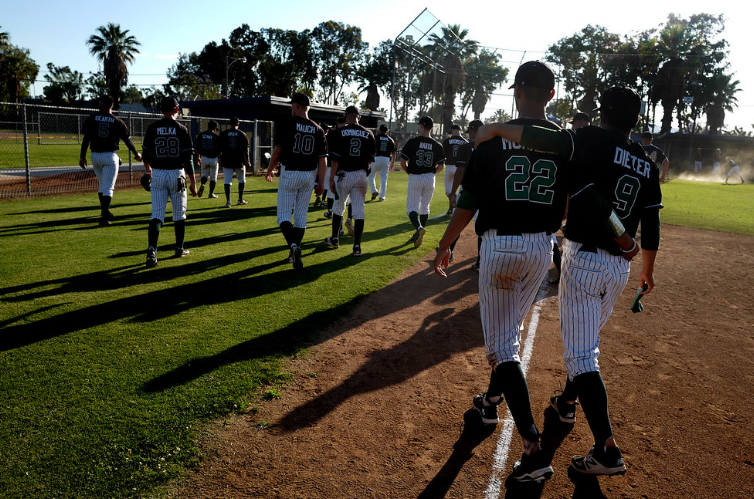 South Hills blows 8-0 lead: South Hills (22-9), the No. 4 seed, was sailing along leading, 8-2, behind junior pitcher Brandon Dieter, who struck out eight and allowed only two hits.
The junior was relieved in the fifth inning J.W. North (20-12) scored twice in the inning and eight in the sixth to advance to the quarterfinals against Vista Murietta on Friday.
South Hills was led by senior Jacob Dominguez with two hits, a run and an RBI, while senior Zack Bromstead had a home run and scored twice. Senior shortstop Jacob Amaya was 2 for 4 with a run and a stolen base.
South Hills took a 2-0 lead in the second on the home run by Bromstead and Deiter’s RBI single. The Huskies took an 8-2 lead when they added six runs in the top of the sixth.

WATCH THIS: Murphy not a happy camper.

Amat comes up a run short: Bishop Amat coach Joe Hoggatt did what every coach would do in the sixth inning of the Lancers’ second-round CIF Southern Section Division 1 baseball game against visiting El Toro.In the bottom of the fifth, Bishop Amat’s Jason Gonzalez had just crushed a two-run homer over the left field fence to tie the contest at 2-2.
Sensing that the game had become a two-inning contest, Hoggatt replaced his starting pitcher Blake Archuleta with ace Isaac Esqueda. In his last four games, Esqueda had an earned run average of 0.03.
“We figured that bringing in (Esqueda), we get a couple of zeros, scratch out a run, and we’d be off to the next round,” Hoggatt said. “But, it didn’t work out that way.”
Instead, it was El Toro’s Tyler Lasch that connected on a ground-ball single to left field that scored Erik Tolman with the eventual game-winning run in the sixth inning to help lead the Chargers to a 3-2 victory on Tuesday.

Glendora 3, Rio Mesa 2 – Brock Welte’s squeeze bunt in the bottom of the seventh inning of the Division 2 second-round game drove in the game-winning run for the Tartans (26-6). Dylan Diaz pitched four innings of no-hit ball, Bryce Wooldridge went 2 for 3 with an RBI and Jake Gonzalez had an RBI. Glendora will face St. John Bosco in the quarterfinals on Friday.

Wilson 1, Santa Ynez 0 (9 innings) – Mat Orozco drove in the game-winning run and Matt Rodriguez pitched eight shutout innings, striking out 10, for the Wildcats (18-8) in the Division 4 second-round victory. Rodriguez has not given up an earned run in 31 consecutive innings, dating back to April 27. Wilson will face Tahquitz in the quarterfinals on Friday.

Gladstone 3, Joshua Springs Christian 2 – Aaron Karbowski pitched a three-hit complete game, striking out 10, for the Gladiators (14-10) in the Division 7 second-round game. Andrew Amezquita went 2 for 4, knocking a pair of runs and Aaron Cervantes went 2 for 3 with an RBI and a run scored. Gladstone will face Arrowhead Christian Academy in the quarterfinals on Friday.