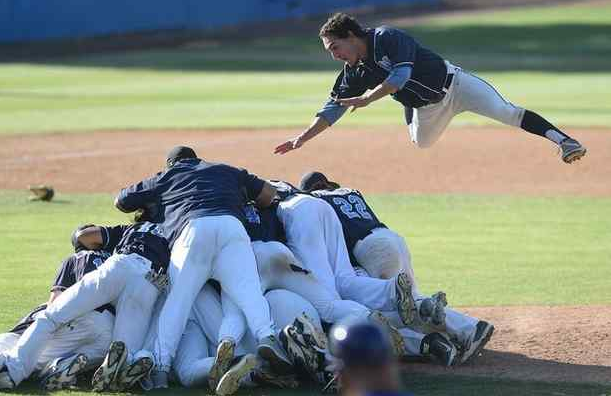 By Stephen Ramirez
RIVERSIDE >> What a difference two years can make.
For the Walnut High School baseball team, it was everything.
In 2015, the Mustangs’ quest for a CIF Southern Section baseball title ended almost before it started, giving up five runs in the first inning before losing big to Redondo.
Saturday, it was Walnut’s turn to smother a team, jumping out to a four-run early lead en route to a 13-2 victory over Righetti to take the Division 3 crown at UC Riverside.
It was Walnut’s second baseball championship and first since the Mustangs defeated Mira Costa for the 4-A title in 1982.
James Arakawa had three hits and four RBIs and pitcher Jacob Garcia gave up two runs and four hits in 5 2/3 innings for Walnut (25-9). Mitchell Bagby and Joseph Bolvin each had an RBI for Righetti (28-7).

“I’m ecstatic,” Walnut coach Paul Acosta said. “I’m a Walnut pure-bred. I was born in Walnut, I went to school in Walnut. I’m blessed to coach at Walnut and even more blessed to bring this trophy back, not just for the team and the program, but for the school and the community. I’m just very proud to be a Mustang.”
Walnut blitzed Righetti for 15 hits and scored in five of the seven innings to win easily. It was similar to what Redondo did to the Mustangs in 2015, scoring five runs in the first inning before Walnut came to bat en route to a 10-0 victory,
“We did that a little bit,” Acosta said of the early-inning barrage. “It made things a little bit more comfortable for us.
“The reason behind it was we put together so many good disciplined at-bats that resulted in some runs, giving our pitchers some room and comfort. It was really nice to play all three parts of the game well from the first pitch to the 21st (out).”
Walnut jumped on the Warriors quickly, getting its first two batters on in the first before Dylan Zavala’s RBI single. Arakawa made it 4-0 in the second with a two-run single. He also had RBI singles in the fourth and fifth innings.
Walnut sealed it in the fifth, scoring six runs for an 11-0 lead after getting five consecutive singles, including consecutive RBI singles from Brandon Godoy, Adam Rodriguez and Frankie Zamarripi.
“I felt really good,” Arakawa said. “I really wasn’t paying much attention to my at-bats. I was paying attention to going middle to the right side. I’ve been practicing hard all season and that hard work paid off.”
Garcia took care of the rest. He didn’t give up a hit until the third and allowed just one through five innings. He tired in the sixth and finished with four hits allowed in 5 1/3 inning and six strikeouts.
“The first five innings, I was feeling great,” Garcia said. “I was doing what I needed to do. I wasn’t trying to strike anyone out, just allow them to hit it to my guys. I knew I had them behind me.
“When the sixth inning came, I knew I had (Dylan Needham) coming behind me who could do the job.”
Walnut, after RBIs by Bagby and Bolvin made it 11-2, scored two in the seventh to go up 13-2 before Needham induced Alex Castellanos to ground out to finish off the Warriors and begin the celebration.
“Bringing this back home to Walnut is very special,” Arakawa said. “It was our turn to win it this year.
“Two years ago, we came up short, but this time we got to the finish line. We won it.”