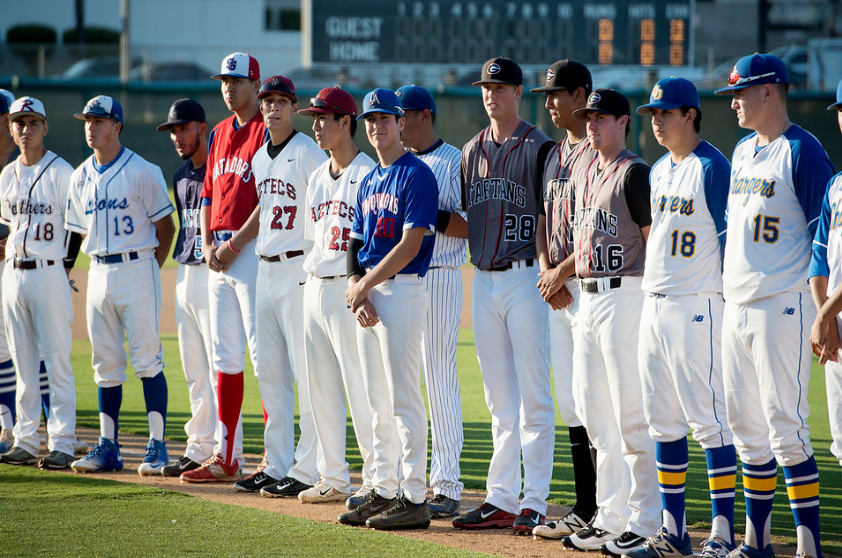 By John Sherrard
Most of the 52 seniors from 30 San Gabriel Valley high schools played in their last game before a packed house in the 22nd Annual San Gabriel Valley All Star event at Mt. San Antonio College on Monday night.
****SGV ALL-STAR PHOTO GALLERY****
The Red team, with six runs in the first inning, cruised to an 11-1 victory over the Blue team at Mazmanian Field.
“This is my first All-Star game,” said Red team coach Jose Montes, who is in his second year at Pasadena. “I’ve been invited before, but this is the first time I’ve been asked to be head coach. It’s a privilege to coach and especially to have some of my players in the game too.”
The Red team, with the help of two errors, two walks, and a two-run single by Arcadia’s John Woo, scored six runs in the first seven batters of the game.
They would add three more runs in the third for a 9-0 lead.
Jesus Maldonado of Bishop Amat led off with the biggest hit of the night — a stand-up triple to right. He scored on a single by Woo. Woo, who received the Most Valuable Hitter award, scored on an RBI double by Damien’s Kalani Matton. Maranatha’s Eddie Lopez followed with a sacrifice to center field to score Woo for a 3-0 lead.
Woo had two hits in the game, along with three RBIs. Matton also had two hits, which included a double and an RBI.

Matton, a four-year varsity starter at Damien, was chosen as the MVP of the game.
“It was exciting and it was a great four years at Damien,” said Matton, who will play at Cornel University next year. “It was a little more relaxed (Monday). It’s a great feeling to get this award.”
The Blue teams’ Joseph Bahna of San Dimas received the Most Valuable Defensive award.
The Blue team was led by Dante Palacio of San Dimas with two singles, a stolen base and an RBI.
The pitching star of the night was USC commit Isaac Esqueda of Bishop Amat.
The left-hander, who received the Cory Lidle Most Valuable Pitcher award, struck out five batters in his two innings. He allowed just one base runner.
“I just tried to have fun and hit my spots and enjoy every moment of it,” Esqueda said. “I’m excited and have been waiting to go to USC next year, my dream school.”
Coaching in his first All-Star game was Blue team coach Elias Chavez.
“It’s a great honor to be part of this event, which has been going on for a long time,” said Chavez, who is in his first season at Charter Oak. “It’s a privilege to coach these guys.”
Three players of Walnut’s CIF Southern Section championship team were also on the Blue team, including pitcher Jacob Garcia.
“It feels pretty good to end things off with the championship and this All-Star game,” Garcia said.
In Sunday’s underclassmen All-Star game at Alhambra’s Moor Field, the Blue team, trailing, 6-3 in the bottom of the ninth inning, scored three runs to tie the game. Both teams failed to score in the 10th inning and the game was called a tie.
Northview junior Andrew Durant of the Red team was named Most Valuable Player with two hits and three RBIs.