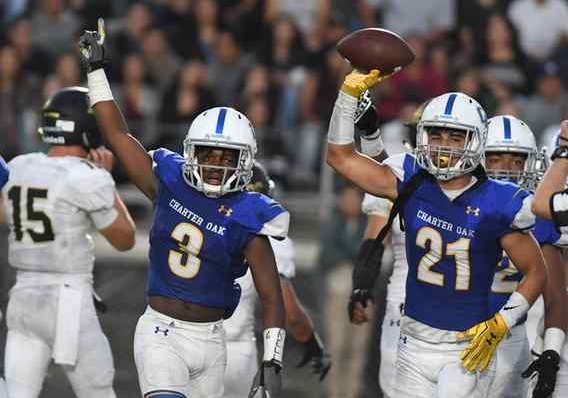 Saturday Morning Quarterback will appear weekly and offer a look back at Friday’s games and try to make sense of the madness that is high school football.

Charter Oak routs Northview: This wasn’t a rematch; it was a repeat.If Charter Oak High School’s thumping of Northview in last year’s season opener was painful, the Vikings better think long and hard before scheduling their crosstown friends again because the sequel was worse. Much worse.
Northview quarterback Steven Comstock may go on to have a terrific season, but the Fresno State commit had a miserable start to his senior year, throwing five interceptions, four in the first quarter. That led to a Chargers blowout in the first 12 minutes.
Charter Oak, ranked sixth in CIF Southern Section Division 3, went on to rout visiting Northview 49-14 on Friday.

Mater Dei dominates Bishop Amat in season opener: Earlier in the week, Mater Dei head coach Bruce Rollinson warned boosters asking about tickets to next week’s highly anticipated showdown with national power Bishop Gorman about the dangers of overlooking a program like Bishop Amat that wouldn’t be intimidated.
The Monarchs responded to that message, with a dominant defensive performance, en route to a 31-7 win on Friday night.
With Amon-Ra St. Brown and CJ Parks, two of the best receivers in Southern California unavailable, the high flying Mater Dei offense chose to chew up time of possession and yards on the ground.

La Habra struggles in loss to La Habra: What better way to start the high school football season with two top programs from CIF Southern Section Division 2 — Upland and La Habra — facing each other Friday night.
However, an all-out, first-half blitz of four unanswered touchdowns by No. 5 Upland put a damper on the early season battle as the Scots rolled to a 35-7 victory.
“We had a lot of guys back from last year and give them (La Habra) a lot of credit, they had a lot of guys playing their first varsity game,” Upland coach Tim Salter said.