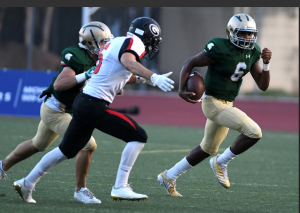 Damien squeezes out win over Glendora: Those expecting a shootout between Damien quarterback Warren Bryan and Glendora’s Bryce Wooldridge never got it.
Both defenses were that good, but in crunch time, Bryan got the job done.
After failing multiple times to finish drives, Bryan tucked the ball and scored on a magnificent 11-yard run and then ran in the conversion with 2:42 left in what turned out to be the game-winning score to give Damien a 14-7 high school football victory over Glendora on Friday.

Maranatha rolls past Pasadena: Maranatha’s Kwon Peterson continued his hot start to the season as the Minutemen routed Pasadena High 36-21 in Maranatha’s home opener Friday night.
Peterson went 9 for 10 for 104 yards and three touchdowns en route to Maranatha’s second straight win.Receiver Jacob Moreno linked with Peterson for four receptions for two touchdowns and 123 yards.
Peterson and Moreno linked up early, connecting on the first pass for 47 yards. The first drive ended in a Pasadena interception, but the Bulldogs couldn’t capitalize.

La Salle freshman CJ Montes delivers: La Salle quarterback C.J. Montes may only be a freshman but his composure and performance in the second half sparked a 42-40 comeback win over Monrovia in nonleague action on Friday night.
Montes tossed four touchdown passes, including three in the second half, to lead La Salle (1-1) to its first win of the season.
“He’s special,” said La Salle head coach Russell Gordon about Montes. “He’s a freshman who’s composed, understands the game and has played on a big stage before.”

Covina cruises past Pioneer: The Covina High School football team scored early and often and cruised to a 56-21 nonleague victory over visiting Pioneer Friday night at Covina District StadiumLeading the charge for the Colts (1-1) was quarterback Nin Burns II who passed for 207 yards and three touchdowns. The sophomore was almost perfect, going 9 of 10, including two TD passes of more than 66 yards.
Burns, who sat out the first two series, came out throwing once he entered the game midway through the second quarter.

Bonita holds off Santa Fe: Bonita overcame a mistake-laden first half filled with penalties and turnovers by both teams to defeat Santa Fe 22-16 on Friday night at Pioneer High School.
Quarterback J.P. Andrade’s 8-yard run with 7:45 remaining appeared to give Bonita the breathing room it needed, extending its lead to 22-8.
The touchdown run was set-up a play earlier when Brandon Stone recovered a fumble at the Chiefs 14-yard line.

Northview rebounds: Northview high school’s football team rebounded from its season-opening loss to Charter Oak with an easy 54-12 victory over Rosemead on Friday.Vikings quarterback Steven Comstock, who has verbally committed to Fresno State, threw for 230 yards and three touchdowns.