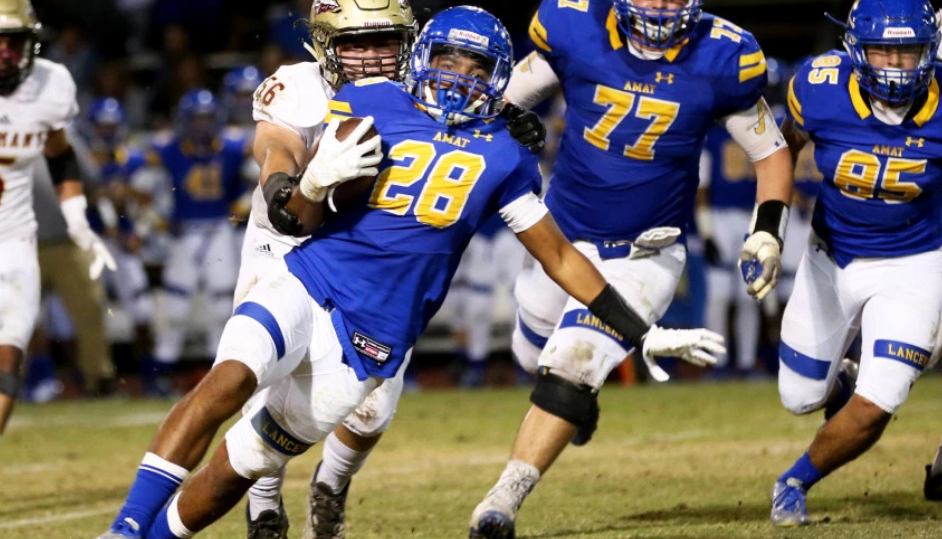 Saturday Morning Quarterback: The stage is set.
It took awhile for Bishop Amat to brush visiting Alemany, but it pulled away from a tie game at half to post a 42-22 victory to set up next week’s Mission League championship game at Chaminade, and now you have to believe the Lancers have a shot.
Especially after Chaminade had to sweat out a 40-35 victory over Notre Dame on Friday.

Bishop Amat football keeps rolling in Mission: Bishop Amat’s Blake Archuleta and Damian Moore led a balanced offensive attack while the defense figured out Alemany in the second half in a convincing 42-22 victory over Alemany at Kiefer Stadium on Friday night.
The Lancers (5-4, 5-0) travel to Chaminade next Friday, with the winner being the outright Mission League champion.
Amat overcame a sluggish start, pulling away with 35 consecutive points after trailing by seven in the second quarter.

Monrovia stuns once-beaten San Marino: It was a struggle, but for the 14th time in 15 years, the Wildcats did it again.In a game that saw numerous lead changes, the Monrovia High football team (3-6, 3-0) defeated host San Marino 42-37 on Friday to win the Rio Hondo League championship.
The Wildcats were led by Maury Rams IV. The junior carried the ball 22 times for 230 yards and scored three touchdowns. Also turning in an outstanding performance was quarterback Trevor McPherson. The senior completed 9 of 13 passes for 260 yards and two touchdowns.

Santa Fe stays undefeated in Del Rio: The Santa Fe High football team came into this season with a chip on its shoulder.After last season’s defensive coordinator and former Chiefs standout Romeo Pellum resigned, it was presumed that the team might suffer a setback in 2017. That notion quickly became an afterthought once Del Rio League play kicked off when the Chiefs knocked off reigning champion La Serna.

La Serna continues to roll: After a loss in the first game of the Del Rio League football season to current leader Santa Fe High School three weeks ago, La Serna has been on a major scoring frenzy, scoring 136 points while winning three consecutive games.
The latest was a 42-17 win over visiting El Rancho on Friday night at California High.
“That first game is in our rear view mirror and it’s definitely taught us a lot about ourselves,” said La Serna coach Andy George about the DRL opening loss.

Muir rally comes up short: The Muir High football team came into its game against Burbank with a chance to solidify its case to make the CIF-Southern Section Division 9 playoffs, assuming it could pull off the upset win against the Pacific League’s first place team. Muir was certainly up to the challenge and nearly had a chance to tie or win the game in regulation. However, the Mustangs fell seven yards short, losing 38-31 on Friday night.
With the loss, Muir (5-4, 3-3) will have to defeat archrival Pasadena in next week’s Turkey Tussle showdown to have any chance of reaching the postseason.