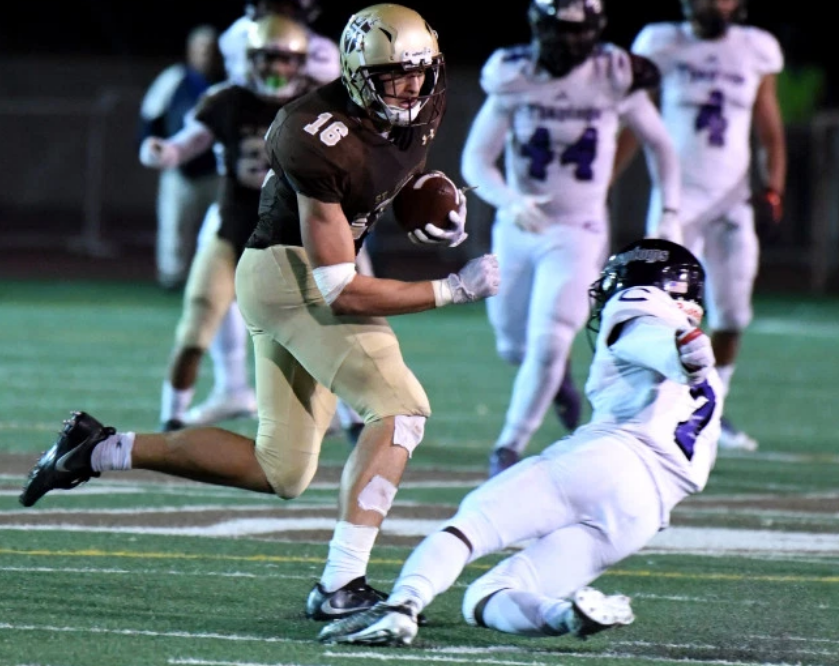 When most observers think about the offensive attack of the St. Francis football team, they point to the passing game under junior quarterback Darius Perrantes.

However, the Golden Knights can run the ball too. It’s one of the key components that has St. Francis (12-1) playing Rancho Verde (11-2) on Friday in the CIF-Southern Section Division 3 championship at home.

St. Francis has rushed for 2,300 yards while averaging six yards per carry. At the forefront of the attack is senior Elijah Washington. Last year, Washington rushed for 582 yards and scored six touchdowns. It’s been a different story this season as the senior has rushed for 1,000 yards (which includes his 226 yard performance with five touchdowns against La Salle) while scoring 16 touchdowns.

“I’ve been a team player at St. Francis since day one,” Washington said. “I am not surprised on what I do any night. I just love going out there and winning as a team. That the good part about what we are doing.”

It’s a family affair for the Washington family at St. Francis. Elijah’s older brother Zachary played football at the school from 2010-2013 and his father Kyle is currently the head Junior Varsity coach for the football program.

It was the 2013 season that made a huge impact on Washington.

“That team might have been the closest team I’ve ever seen at St. Francis,” Washington said. “They lost to Serra in the semifinals. Joe Mudie in the backfield and I learned a lot of stuff from him. He gave me some pointers on how to succeed in high school and I’ve just taken it from there.”

It’s all come full circle for Washington as he mentors his fellow teammate in the backfield, Kevin Armstead. A sophomore transfer from Chaminade, Washington sees a lot of potential in Armstead.

“He’s a great athlete and he’s only a sophomore – he’s got his whole future ahead of him,” Washington said. “Bringing him in, I had to show him the ropes and he had to learn the playbook, -so I taught him a lot about that.”

The long drought is over

The last time St. Francis made a CIF Southern Section football championship game was in 1964. The Golden Knights defeated Claremont 14-0 to repeat as Division AAA champions. One of the members of that team was Terry Terrazone, who is currently the assistant athletic director at St. Francis. He also has served as Athletic Director for the school along with a stint as head football coach.

“In those days, you had to win your league to make the playoffs,” Terrazone said. “The game is so much different than today. It was a more physical game with less throwing.”

Terrazone said the game was all about having a punishing running game and winning the field position battle.

“We did a crossing pulling with our lineman,” Terrazone noted. “A more misdirection type of running attack.”

If the Golden Knights win on Friday night, they’ll qualify for the CIF State Playoffs. According to Mark Tennis of Cal Hi Sports, he has the Golden Knights projected to play in the Division II-AA regional final against Tulare Union High School. The Tribe just won the CIF Central Section Division 2 championship last week, defeating Dinuba 49-21.

“That’s four teams in front and there you have it with Tulare in next division which is D2-AA. I would think St. Francis would be ahead of CIFSS Division 4 (Downey vs. Cajon) and San Diego Division 2 (Ramona) champion. I would have Tulare with home game (CIF Central Sec D1 team is likely traveling) but they could look at computer ranking and give it to a higher ranked team.”