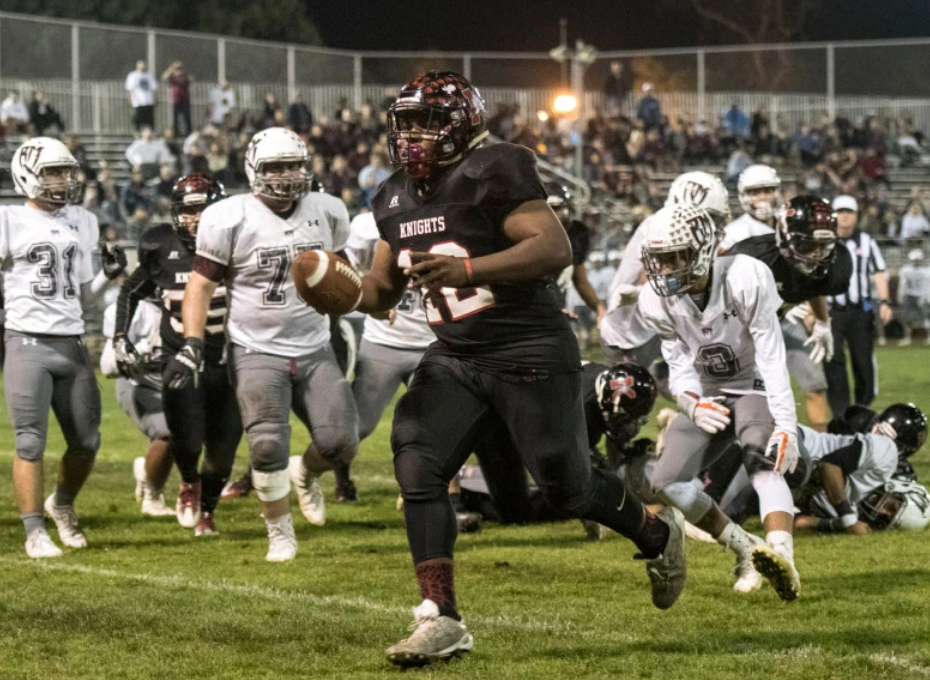 Turns out they haven’t weighed him in a while.

If fourth-seed Covina (11-2) is going to win its first championship since 1995 and sixth in school history, it’s going to have to find a way to contain Arrington in Friday’s Division 11 championship against Katella (12-1) at Covina District Field at 7 p.m.

“He’s a big kid but don’t let that fool you, the kid can play and the kid can sling it,” Brown said.

“The first thing you notice is his size, he could probably be our nose guard or something,” Brown said. “You got to stay low and rally to him because one guy isn’t going to bring him down, and when you hit him you have to wrap him up.”

* MORE STORIES: Covina football thrives with leaders Tauvao and Maae and some sportsmanship from Cuellar

Katella is riding a 12-game winning streak and hasn’t lost since its season opener to Kennedy, 14-0, which is probably a game you can throw away.

Katella, looking for its first title in school history, had experimented with the pistol offense over the summer, but when that failed miserably against Kennedy, it immediately went back to the spread and hasn’t lost a game since.

“Almost immediately you could sense relief among the kids,” DiPalma told the Orange County Register about switching back to the spread after the loss. “The new kids on the team didn’t know anything was different, but Nate (Arrington) knew the difference and the offensive line knew the difference.”

Covina presents its problems for Katella too.

Sophomore quarterback Nin Burns II has thrown for 2,440 yards and 30 touchdowns, and sophomore back Erik Cuellar set the school’s single-season rushing record with 2,145 yards to go with 19 touchdowns.

Combine that with the Colts’ experienced offensive line and that has Katella’s attention.

“They’re very well coached,” DiPalma said. “It’s a young backfield but it’s a very good backfield. It seems they’re always calling the right play or making the right moves. It’s not a lot of complicated stuff, but what they do they do well.”

DiPalma is also impressed with the Colts’ athletic defense.

Even though Covina gave up a lot of points in last week’s 57-56 overtime victory to knock off top seed Culver City, DiPalma said the victory was impressive.

“Defensively, they’re (Colts) a little odd,” DiPalma said. “You’re not sure where they’re coming from, but they’re athletic and they’re good. It’s not an accident they got to the finals.

“What they did last week beating Culver City was impressive because Culver City is a very athletic team but they (Colts) ran the ball all over them. We don’t usually see a lot of teams from the (San Gabriel Valley), but what we’ve seen has been very impressive. It should be a great game.”

Brown said the same thing. After all the hoopla, he’s ready to put his headset on and it get started.

“After all the fanfare and hype it comes down to a football game,” Brown said. “You can say this, you can say that, but at the end of the day the two best teams are here and one of them is gonig to win it and we hope that team is ours.”