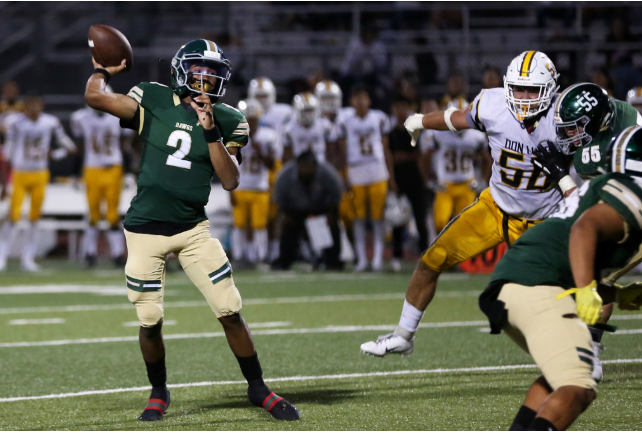 South Hills 39, Don Lugo 7: If there wasn’t a lot of buzz about the South Hills High School football team before the season, there’s nothing like back-to-back blowouts to create the buzz for you.
South Hills picked up where it left off last week, routing visiting Don Lugo 39-7 at Covina District Field on Thursday behind another steady performance from sophomore quarterback Khalil Ali, and a defense that was one blown play away from posting a shutout.

South Hills QB Khalil Ali after throwing for 146 yards and two TDS and running for another score in 39-7 win over Don Lugo pic.twitter.com/8P6tFfdpec

Mayfair 39, California 21: The California High School football team was hoping that Thursday’s game against Mayfair would turn out better than last year’s 27-point loss to the Monsoons that still resonated with them.
For a while, Cal managed to go toe-to-toe with the reigning Suburban League champions, but thanks to a four touchdown performance from Mayfair running back Tstrong Mataele, the Monsoons cruised to victory again, beating Cal 39-21 in the nonleague affair.

California High coach Kyle Trudell isn't dwelling on the Condors' 39-21 defeat against Mayfair. Instead, he thinks it's a good preparation for his passing attack against arguably the toughest defense it'll face this year. @SGVNSports pic.twitter.com/sTP936qyAg