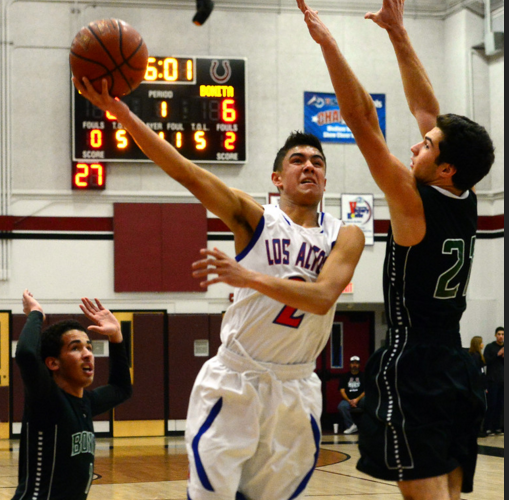 Boys basketball
Palomares League
Bonita 79, Diamond Bar 61 — Senior Tyler Poepping dropped 21 points on an 8-for-18 shooting performance to lead the Bearcats (17-3, 4-0) to their fourth consecutive Palomares League victory, defeating the Brahmas (6-14, 1-3).
Russell Hernandez made 4 of 6 shots from beyond the arc for Bonita, which never trailed after the first quarter. The 5-foot-11 senior forward finished the game with 16 points.
Bonita finished the first quarter on an 11-0 run that was concluded by a lay-up by Yoffi Mooney, who made his first start of the season. Mooney tallied eight points, seven rebounds, four assists, and two blocks.
Joe Quintana added 12 points and team highs of five assists and three blocks to help the Bearcats remain in a tie for first place in the league.
Malik Corey had a team-best 13 points for the Brahmas along with two assists and two steals. Ethan Galang came off the bench and added nine points, sinking 3 of 5 shots from 3-point territory.
Ayala 89, South Hills 34 — The Bulldogs (18-2, 4-0) set up a battle for first place in the Palomares League on Tuesday with a lopsided victory over the Huskies.
Claremont 80, Glendora 68 — The Wolfpack (14-4, 1-2) overcame a first-half deficit against the Tartans (10-9, 1-2) to claim their first Palomares League victory of the season.
Hacienda League
Diamond Ranch 50, Chino Hills 39 — Ryan Haywood knocked down five second-half 3-pointers to lead the Panthers (14-6, 4-0) to their eighth consecutive victory heading into the battle for first place in the Hacienda League with Los Altos. Haywood finished with 19 points.
Los Altos 108, West Covina 62 — The Conquerors were trailing 17-16 after the first quarter, but turned the first meeting with the Bulldogs into a blowout.
Walnut 68, Charter Oak 43 — Dwight Ramos scored 31 points and had 10 rebounds for the Mustangs, who bounce back after the loss to Diamond Ranch.
Valle Vista League
San Dimas 67, Covina 44 — The Saints improve to 4-0 in the Valle Vista League, taking sole possession of first place with the loss by Rowland.
Wilson 64, Rowland 54 — Phillip Aguiniga had 21 points and Curtis Hong scored 10, but that wasn’t enough to prevent the Raiders’ first loss in the Valle Vista League this season.
Girls basketball
Diamond Bar 39, Bonita 22 — Juliana Gamboa scored 22 points for the Brahmas (18-2, 4-0) in a Palomares League victory over the Bearcats (13-9, 2-2). Destinee Garr added seven points, while Diamond Bar held Bonita to its second lowest scoring tally of the season.
Rowland 59, Wilson 16 — The Raiders remained undefeated in the Valle Vista League with their fourth consecutive win.
Girls soccer
Sierra Vista 5, Duarte 0 — Maria Hernandez completed the hat trick to lead the Dons (15-2-1, 4-0) to take sole posession of first place in the Montview League, handing the Falcons (6-7-4, 3-1) their first league loss. Zitlali Jimenez also had a goal and an assist for the Dons, and Bernice Macinas also had a goal. Deziree Valdez was creditted with the shutout, recording one save. Kimberly Araujo also had one assist.
South Hills 5, Claremont 2 — Haily Zerbal scored two goals for the Huskies (13-1-5, 5-0) in a high-scoring Palomares League win over the Wolfpack (14-3-4, 2-1-2). Amber Marinero and Skylar Robledo each had a goal of their own. Karsyn Jordan scored for Claremont on a penalty kick and Danielle Lagrave scored the other Wolfpack goal.
Los Altos 2, West Covina 1
Girls water polo
Glendora 12, Diamond Bar 8 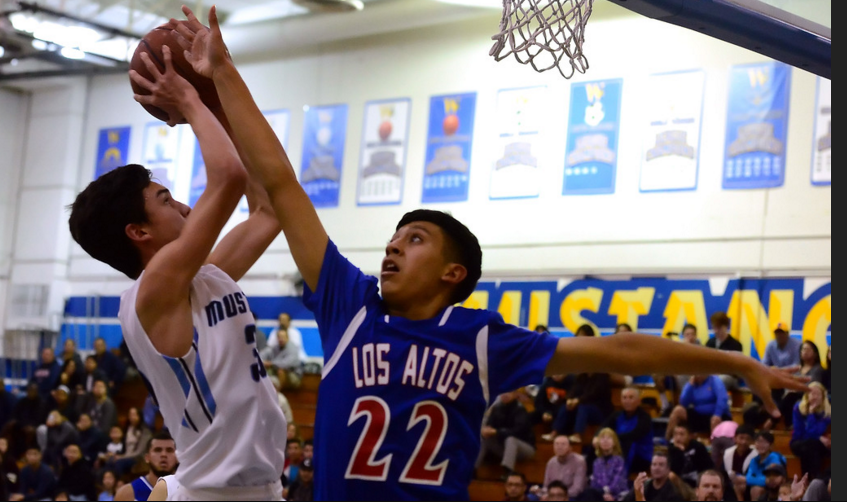 Girls basketball
Rowland 50, Covina 38 — Rowland got an outstanding performance from the “Dynamic Duo” of Tianna Eaton and Farrah Castillo and knocked defending Valle Vista League champion Covina out of a first-place tie with a 50-38 win over the Colts on Wednesday night.
Walnut 58, Diamond Ranch 28-– The Mustangs stay within a game of Los Altos in the Hacienda League standings with a win over the Panthers after the Conquerors defeated Walnut last week.
Boys soccer
Damien 4, Etiwanda 0— After not scoring a goal in their last game, the Spartans bounced back with four goals, including three by Conal Dennison. Corey Valdivia scored the other goal for Damien, which improves to 2-0-1 in the Baseline League. 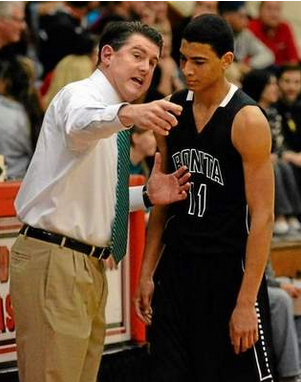 Head Coach Tim Godley in his second year with the Bearcats, leads the team to a 54-51 win over San Dimas on Tuesday night.

Boys Basketball
Bonita 54, San Dimas 51 — Josh Peifer pulled down his first two rebounds of the game in the final two minutes of the game, but that was all Bonita (9-3) needed to defeat San Dimas (7-6) on Tuesday night in the annual rivalry game.
Bonita led by as much as nine points with less than four minutes left in the game, but a pair of triples by Preston Funderberg and Donnell Leffridge for the Saints make the score 52-49

San Dimas had a chance to tie the game but Peifer got his first rebound of the game grabbing a missed jumper from Leffridge and then feeding the ball to Joe Quintana, who found Anthony Cascarano open in the paint for a lay-up.

San Dimas quickly responded with a jumper by Andrew Sanchez to cut the lead back to three. The Saints then forced a missed jumper on defense, but Peifer grabbed his second rebound of the game before getting fouled, which was enough to secure the Bearcat victory.

The Saints were led by Leffridge, who had 18 points, making 4 of 5 shots from behind the 3-point line. Sanchez didn’t miss a bucket all night, going 4 for 4 from the field for 10 points. Ronny Rafeh tallied seven points and 11 rebounds for San Dimas.

Bishop Amat 76, Pacifica Christian 33 — The Lancers got their second win in a row since having their 10-game winning streak snapped with a dominant performance agianst Pacifica Christian (1-10). Harrison Kay led Bishop Amat (12-2) with 19 points, while Ryder Ruiz had 17 and Karen Ford tallied 13.
Downey 60, California 45 >> C.J. Smith led the Vikings (14-2) to victory with 18 points, while Brian Chavez added 11 points. The Condors (4-11) were led offensively by Alan Puga with 10 points.

Boys tennis
Bonita 9, Glendora 9 — The Bearcats won the third place tiebreaker match by games 73-63 in the Palomares League. Matt Diamond, Bennett Williams, and Danny Aljamal all won two of their three singles sets. Diamond’s set scores were 6-1, 6-0, 1-6, and Aljamal went 6-3, 6-0, 0-6. Glendora’s No. 3 singles player won all three of his sets. In their previous meetings, Glendora won the first 5-13, but Bonita won the second 10-8 to create a tie for third place. With the tiebreaker victory, Bonita will qualify for CIF Playoffs as the Palomares No. 3 seed.
Softball
South hills 3, Diamond Bar 1 –`The Huskies got their second win of the week in the Palomares League after defeating the Brahmas. Natalie Lugo threw a complete game with eight strikeouts and just two hits allowed for South Hills. Lugo has allowed just two runs in 15 innings of work this week. Mariah Tovar hit a three-run home run in the bottom of the fifth to account for all three of South Hills’ runs. Christie Aguilar and Clarissa Perez also each had two base hits for the Huskies.
Glendora 8, Bonita 4 — The Tartans bounced back from a 4-1 loss on Wednesday to South Hills with an 8-4 win over the Bearcats to maintain their one-game lead in the Palomares League standings over the Huskies.
Ayala 3, Claremont 2 — The Bulldogs scored in the top of the seventh inning to give head coach John Ameluxen his 450th career victory.
Baseball
Ayala 9, South Hills 4 — After dropping a 4-2 decision to the Huskies on Wednesday, the Bulldogs bounced back with a victory over the Huskies two days later to get back into a tie for first place in the Palomares League.
Glendora 10, Claremont 1 — The Tartans joined South Hills and Ayala in a three-way tie for first place in the league with a 7-4 record after blowing out Claremont in Glendora. Austin Isenhart got the win for Glendora with 5 2/3 innings pitched and eight strikeouts with just two hits allowed. Raymond Romo went 3 for 4 with two RBIs to lead the Tartan offense.
Bonita 7, Diamond Bar 4 — The Bearcats are now just one game out of first place after defeating the Brahmas to improve to 6-5 in the Palomares League. Justin Gomez went 2 for 4 for the Bearcats with three RBIs. Tommy Delgado reached base in all three of his plate appearances with a single, walk and was hit by a pitch. Delgado scored all three times. Nick Johnson then threw four shutout innings in relief.

Baseball
West Covina 6, Charter Oak 5 — Darron Benton lifted the Bulldogs to a comeback victory over Charter Oak in Hacienda League play with a walkoff RBI-single with the bases loaded in the bottom of the seventh for his second RBI of the day. The Chargers raced out to an early 5-0 lead in the second inning off a three-run home run by Nick Hernandez. However, West Covina’s Alex Carrillo shut down Charter Oak for the next three innings, recording nine strikeouts in five innings of work. Carrillo also had a pair of singles and a double to help the Bulldogs claw their way back into the game. Then with the bases loaded, Andrew Maxson drew a walk to tie the game and set up Benton’s game winning hit. Steven Ramirez got the win in relief throwing two shutout innings.
San Dimas 7, Maranatha 0 — San Dimas continues its winning streak to 16 games to start the season.
Santa Margarita 8, Ayala 0 — Ayala fell in its third contest of the 2015 National Classic, which it is hosting.
Walnut 3, Desert Christian Academy 0

Baseball
Chino 8, Diamond Ranch 0 — Josh Thornton threw a complete-game shutout with five hits and five strikeouts for Chino. Jonathan Alba, Cesar Sandoval, and Mike Guerrero each had two hits for Chino.
Bonita 1, Claremont 0 — Isaiah Haro tossed a complete-game shutout to put the Bearcats (7-3, 2-1) in a four-way tie for first place in the Palomares League. The senior struck out three batters and allowed just three hits after carrying a perfect game into the sixth inning. Alex Gonzalez scored the team’s only run reaching base on a single. He then stole second base and advanced to third on a deep fly ball by Justin Gomez. Then a blooper by Kenji Henderson over the third baseman drove in the game’s only run.
Ayala 1, South Hills 0