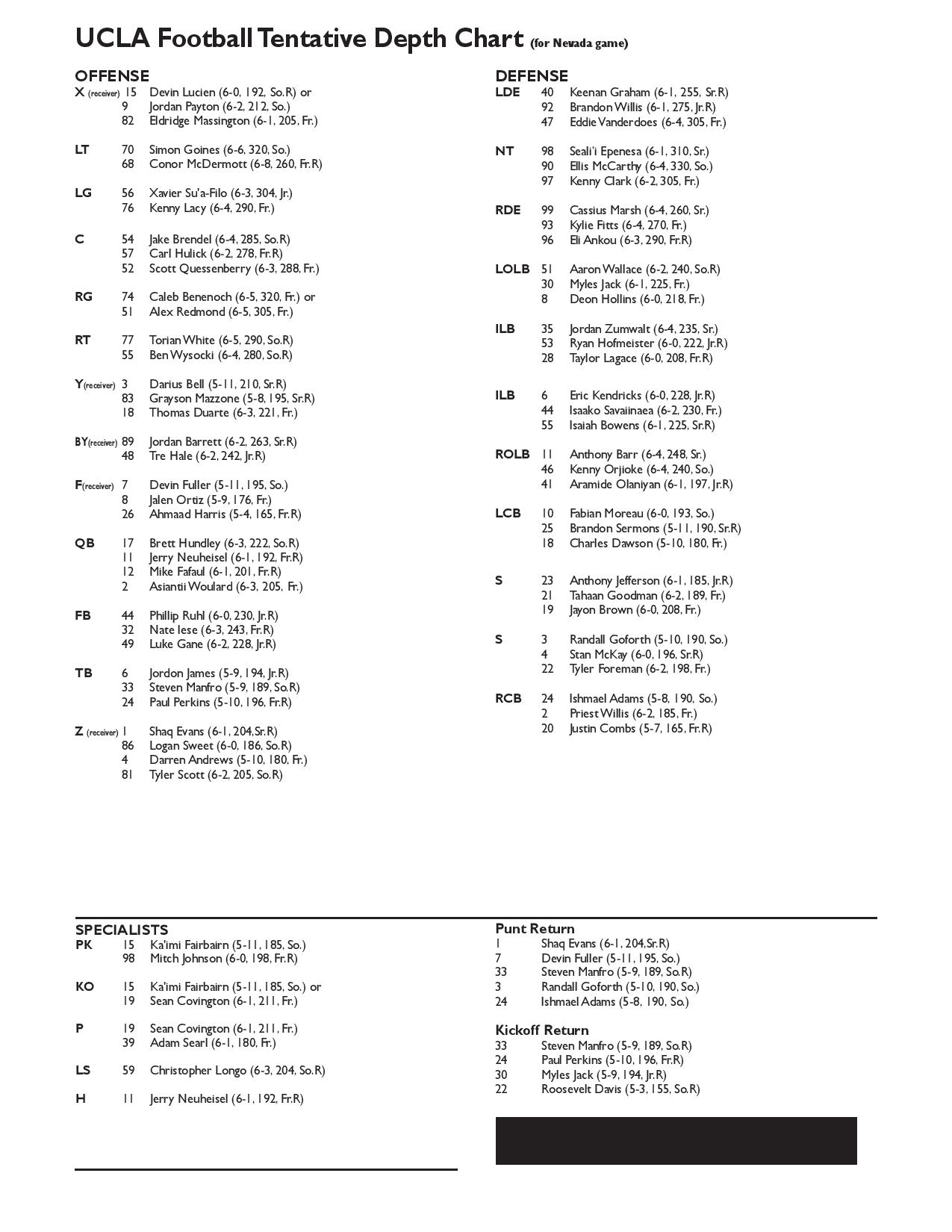 In an unexpected move for head coach Jim Mora, UCLA released a depth chart Monday night. It’s only tentative, and only for Saturday’s Nevada season opener, but some sense of official order is better than none.

— Five-star defensive end Eddie Vanderdoes, whose successful appeal to play immediately made for many jubilant fans, is listed third on the depth chart behind not only senior Keenan Graham, but also junior Brandon Willis. Vanderdoes was sidelined nearly all of fall camp with a tight back, but impressed immediately once he returned to action. He should still claim the No. 1 spot on the left side soon assuming good health.

— As expected, Jordon James is listed as the head of the running back committee. Behind him, however, is Steve Manfro, who played F-back last season and only carried the ball eight times. (Manfro also won the kickoff return job despite his struggles returning punts in 2012.) No. 3 on the tailback depth chart is redshirt freshman Paul Perkins, but the separation between the two listed reserves probably isn’t great. Senior Malcolm Jones, who earned a scholarship after returning as a walk-on, was not listed.

— Jerry Neuheisel is officially the backup behind Brett Hundley. Walk-on Mike Fafaul is the No. 3 quarterback, while freshman Asiantii Woulard is listed as fourth-string. Woulard has a big arm and a high ceiling, but will likely redshirt unless Hundley misses significant time with an injury.

— This is UCLA’s starting secondary: Ishmael Adams and Fabian Moreau at cornerback, Anthony Jefferson and Randall Goforth at safety. The quartet took first-team reps for most of fall camp, but are still lacking in game experience. Goforth, a sophomore, is the only one with starting experience. Talented freshman Priest Willis, listed behind Adams, could seize a starting corner spot at some point in the season. There’s some upside to this unit, even if questions still abound. Considering how maligned the Bruins’ defensive backfield was last season, it’s hard to see this one being worse.

— The starting offensive line: left tackle Simon Goines, left guard Xavier Su’a-Filo, center Jake Brendel, right guard Caleb Benenoch, right tackle Torian White. Benenoch is technically listed as one of two “OR” options at right guard with Alex Redmond, but the former was clearly the most polished of the first-year linemen. Poasi Moala isn’t listed, but the freshman got a lot of second-team reps at right tackle through fall camp.

— That promising freshman Thomas Duarte is listed behind senior Darius Bell at Y-receiver isn’t surprising, especially at this point in the season. That he’s behind the 5-foot-8 Grayson Mazzone is. Mazzone is a good route runner, but he doesn’t expand the offense the way Duarte can. Mora even said last week that he expects Bell and Duarte to split reps.

— Devin Lucien and Jordan Payton are both listed as possible starting receivers opposite Shaq Evans. Payton has been more consistent, but Lucien is the one who generates more “ooh” moments.

— Christopher Longo is officially the starting longsnapper. Of all the special teams positions, this is the biggest question mark for the Bruins. Kevin McDermott and Christian Yount were rocks there, and Longo isn’t close to that level yet. He’s also only listed at 204 pounds.